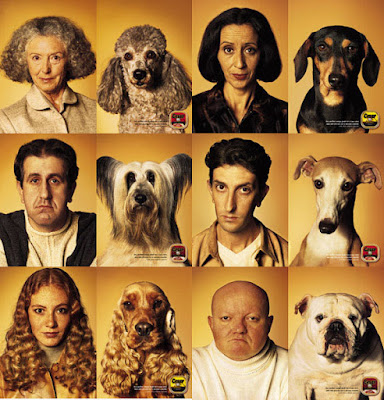 This news just in: we DO look like our dogs. Ground-breaking research from Bath Spa University has revealed that we can tell which dog belongs to whom using our eyes. A group of volunteers shown pictures of dog owners and asked whether they had a labrador, poodle or Staffordshire bull terrier got the answer right twice as often as would be expected by chance. The Guardian

Additionally, the degree to which one needs such validation, and the type of validation required, would also determine the kind of dog one might pick, i.e., to complement or compensate for whatever their proficiencies or deficiencies.

So, if we are laughingly remarking that a particular person looks like her/is dog, we might actually be saying that the person has picked one that looks like her/im. In this, case, I would recommend that the person’s laughter be cut short in favour of wondering if they are not similarly inclined in their relationships with people, and their own spouses.

However, that said, we might not pick our pets purely on the basis of physical similarities, but on the basis of characteristics as well. Speaking for myself, I would pick cats as opposed to dogs for their couldn’t-care less, independent-mindedness, and the sort of non-surprised incredulity that seems to be expressed on their faces in the face of human stupidity. In that, the only validation I might receive is in the knowledge that there is another who doesn’t give as much of a toss as I.

Another scenario is where a dog comes across as ‘owned’ just like one’s spouse. In that, say, a woman receives additional validation as the ‘top dog’ with her canine companion on a leash in front, and the husband being towed on an invisible one beside. This thought first occurred to me upon my constant observation of the relationship between Chinese women and men in singapore.

In this case, if similarity attracts, it does so in terms of women’s perceiving similarly of both their husbands and dogs, or putting it another way, feeling like the ‘top dog’ with two bitches in tow.  In this scenario, the Matching Hypothesis, where people tend to pick partners on the basis of similarity or physical attraction goes out the window.

As for pets as 'compensation', well, i bumped into a relative's wife a couple of years ago here in singapore (ugh!), and in the brief chat, i asked her if they had any kids, and her reply was, quote, "No.  But we got a cat."  I was taken aback by the response, but tried not to show it.  This girl was of a 'career woman' pedigree, defined by her 'career', with most of her human faculties functioning purely for the expression of her 'career' self.  Just as she is inclined to think that her humanity and job title are interchangeable terms, it is not surprising that the thinks a child and cat are as well i suppose.  Sad innit.

The English are another case in point.  They too are great lovers of pets, especially woofties.  However, given that the English strangely pride themselves in their 'reserve' and 'aloofness', they are quite unable and unwilling to form warm, down-to-earth, and close relationships with people.  So we can say that for them, pets is compensation. (I commented as such once on Facebook beneath a BBC article on the British penchant for dogs, and had my comment deleted and my page blocked from my posting for a few days once.)

During my pretty lengthy sojourn in the UK, i also couldn't help noticing that quite a few amongst the aggressive sector of the working or 'dole' classes in the UK tended to keep pitbulls, bulldogs, and other aggressive breeds of the canine corp.  They are known as 'chavs' by those of the working and upper classes whom are not similarly inclined.  In their case, it is complementary in function, though a compensation for being downtrodden by their elite, the Royal family, the latter of which many amongst them are strangely supportive of.

...a pet might just serve as a complement to a loving relationship within a family. So this is not a negative indictment of those inclined to keep pets.  I've often noticed how Americans for instance, have a great penchant for doggies.  As an irrationally and staunchly capitalist region, they are severely mutually alienated.  However, i find that within family and friendship circles, they are close-knit.  In such a case, a dog is just yet another means by which they express their desire for community and interrelational intimacy.

...why people keep pets is quite complex. It can indicate what we are in terms of our relationships with the people around us in a compensatory or complementary sense. Additionally, it might go even deeper with a subconscious realisation by many that they are quite disabled from exhibiting effective care for their fellow humans by their own self-centredness or an overarching milieu wherein popular empathy or intimacy is frowned upon, or where one realises that lots of people (these days) aren't worth the bother.

This is where the instinct to ‘care’ is contracted to that which is convenient or self-validating, or helps keep one's humanity alive through the act of care and love, albeit for a pet. Of course, as stated, it can also complement a generally empathetic milieu wherein people are relatively caring generically and thus exhibit this through cross-species empathy.  But where same-species empathy is absent, cross-species empathy becomes compensation.