In Memoriam, JBJ. Move over JBJ, it's ed's Turn 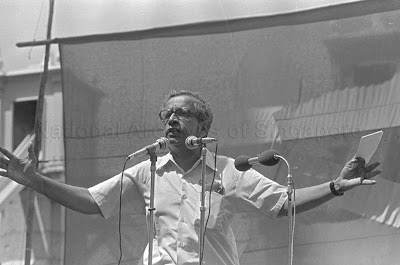 There is only one thing that I learnt from JBJ, who will always have my respect, and that is, the significance of the individual in attempting to see beyond what is being promoted via the prominent, powerful, and popular.

Even where many ignored him - and I couldn’t help noticing that the Chinese attending a Chinese martial arts performance at a well-lit stage a placard’s throw away significantly outnumbered those attending a memorial candlelight vigil for JBJ at a hardly-lit ‘Speakers Corner’ - he still plodded on.

Unfortunately, the people, on both sides of the illusory divide between the proposition and 'opposition', well-practiced in following the prominent or/and powerful, never appreciated this point, and to this day, they still abide by the Confucian notion of, ‘if you aren’t someone, then your ideas are not worthy of discussion or consideration.’.

That is the problem with many activists, be they Chee or JBJ or their bevy of sheep. They fail to realise that whilst they are occupying the limelight amongst those whom are inclined to be mesmerised by the visual pitter patter of fairy lights, they are simultaneously devaluing the significance of the individual whom they hope to fight for. That is a paradoxical situation that generally arises within societies used to leaving politics in the hands of the politicians.

Hence, when you look at the ‘activists’ of today in singapore, they are most inclined to only discuss the ideas of the prominent, be they Obama, their own oppositional leaders, and those of the party they purport to oppose. But there is little equitable appreciation of each other. It seems that the formula by which one’s ideas might be given serious and popular consideration requires little more than the propensity to be burdened with government-initiated lawsuits, be seen to oppose, and be arrested for it.

Originality of ideas, or true insight seems to have little to do with it as, I have to admit, none of the ideas of JBJ or Chee can be accused of it. They were just aping western methods and approaches for the realisation of democracy without appreciating how local conditions and culturally-induced biases had to be taken into account, and added steps taken to counter these. Not appreciating this led to them being undone by these oversights.

It is all too easy to blame the authoritarianism of a government than to consider the impotence of one’s methods. Hence, people are still inclined to hero-worship Chee or JBJ as an unwitting and subconscious effort to relieve themselves from doubt-inducing introspection whilst absolving them and their respective cultures and perspectives from complicity.

In Chee’s reverential homage to JBJ, he presents him as one who constantly fought against apathy and indifference. Unfortunately, as JBJ and Chee, rarely, if ever, touched on cultural factors, all that one can say is that both put up the 'good' fight whilst indifferent to the cultural foundations and means upon and through which apathy and indifference is based and reinforced. The party in power, however, and unfortunately, did not make this mistake.

Hence, today, thanks to their oversights, activists are inclined to simply follow their leaders; not give as much consideration for each others’ ideas; view critique of the opposition as indicative of one’s support of the party in power; discuss ideas of the prominent; whilst embodying in practice and oversights, their ethnically and hierarchically ordered depreciation of reality which is nothing short of culturally and racially fascist. A wholly Confucian/Legalist paradigm seems to encapsulate and insulate the populace and singaporean ‘activists’ from that degree of empathy and appreciation of each other’s significance that is required to enhance their understanding of the essence of democracy.

" ...the ‘opposition’ today is not truly a product of the insights gleaned from the analysis of the deficiences of the past, but of its oversights.


The significance of ‘ed’, in the context of the title and this observation, is not about the author, but of the significance of the individual which Confucian/Legalist cultures is by definition incapable of grasping.

Whether people are on the side of the proposition or ‘opposition’, they always seem to engage from within the overarching paradigm instituted by Confucian governments. In that is their undoing, or in the best case, slows down democratic progress immensely whilst the redefinition of the idea of ‘progress’ is itself redefined via the socialisation and underdevelopment of subsequent generations.

The significance of ‘ed’ lies in the significance of every individual to see beyond the perspectival fashions of the day. That is, to question their leaders, to deem oneself worthy of going past these leaders in perspective, to appreciate revered icons not only in terms of their achievements, but also in terms of detecting their oversights. In other words, not to live within the shadows of the giants of the past, but to realise that the ‘giants’ of the past and present appear as such on the basis of our ignorance as opposed to their aptitude.

To ask JBJ to 'move over for ed' is to direct the local populace to appreciate the value of their own significance in building upon and past the giants of the past and present, and to focus on both their achievements and oversights so as to present the best challenge to the Confucian/Legalist/Orwellian milieu that can be afforded it by way of horizontal valuation – that is, the popular appreciation of each other and oneself as opposed to the reverence of leaders and those whom are more known for a resume of arrests as opposed to insight.

That is the essential and only valuable message that is the stance and approach of JBJ. And it is only in replication of it that we honour his memory.