The Singaporean Democrats of the Fascist Left 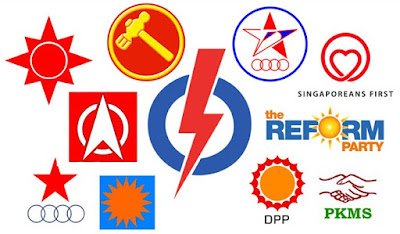 Legalist-Confucians abound on both sides of the Great Wall of self-absorption that has been erected in the course of 50 years of propositional rule, with both sides being fronted by well-ordered regiments in the shadows of disparate but indistinguishable Forbidden Cities.


Democrats of the Fascist Left?  A contradiction in terms?

When I look at the opposition movement in Singapore, that is the term that pops into mind. I often look quizzically at the efforts of the said ‘Democrats of the Fascist Left’ - whom I will henceforth refer to as DFL for the sake of brevity - whenever they ape those they think they oppose, or leave unaddressed that which does not compromise the interests of the chinese.

In 1987, alleged ‘Marxists’ were rounded up or had to flee the country – many of whom were from the Catholic quarter – by the government and detained without trial. The DFL have been tripping over each other’s placards ever since, attempting to prove that they weren’t ‘Marxists’ and even accusing the PAP Jugend of communist tendencies . This simply evidences their falling for the proposition’s demonisation of ‘Marxism’ and ‘Communism’.

With the influx of ‘foreign talent’ and migrants from foreign climes, and especially China, the DFL began to become jittery with regards to the privileged position of the local Chinese majority whilst completely oblivious to the fact that they were simply experiencing a dose of what they had been dishing out to the other ethnic groups for a few decades, or turning a blind self-serving eye to.

Many were also speaking about the need for ‘foreigners’ to ‘integrate’ whilst it is verifiably the case that ‘the majority’ had not bothered with ‘integrating' with other ethnic groups. In fact, as I had often stated, their level of ‘integration’ is of the sort that the BNP is promoting in the United Kingdom and which has oftentimes elicited the revulsion of the masses in the UK.

The proposition had done its best to associate the idea of ‘the majority’ with ‘race’; validating the idea of 'the tyranny of the majority' where 'minorities' are discountable; whilst doing much to maintain the racial ‘balance’ in favour of the Chinese. Precious few, if any, amongst the DFL sought to question this with as much tenacity as other self-interested issues. It mainly focuses on 'interests that affect all of us', which basically means that the other ethnic groups interests are looked at only if they coincide with chinese interest. Hence, the failure of the DFL to recognise gross instances of bigotry in the social and political milieu, or, when their attention is drawn to it, to simply ignore it.

The other ethnic groups themselves generally fail to take issue with or notice said gross instances of bigotry and many have become apologists whom have bought into the notion that it is natural for a race-defined majority to prefer itself, or fail to notice their own less-preferred position, or others’ blatant disregard of instances of bigotry.

What these people arrogantly fail to realise is that one cannot be a part of a milieu without being, in significant part, a product of it.

The reality of the human subconscious, and our formulae for comprehending reality, which is in turn impressed upon us by way of the manipulation of the perspectival infrastructure by the proposition, require that truly progressive people take the sceptical scalpel to one's own soul in tandem with picking up the placard. However, as tendencies toward immediate gratification is most pronounced amongst minds made less by a fascist status quo, it is not surprising that the 'opposition' would mutate into democratic fascists themselves.

Singapore is certainly in a democratic transition, but this is founded and built on a fascist basis. Hence, It seems that to choose between the proposition or the DFL has finally become a choice between 2 dynasties as opposed to a choice between a dynasty and one that seeks to end the reign of dynasties per se. Legalist-Confucians abound on both sides of the Great Wall of self-absorption that has been erected in the course of 50 years of PAP-rule, with both sides being fronted by well-ordered regiments in the shadows of disparate but indistinguishable Forbidden Cities.