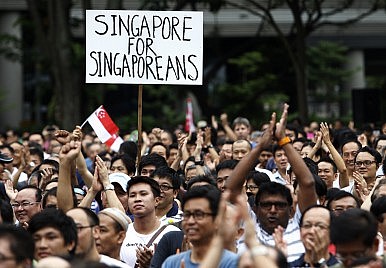 “A Singapore Indian has expressed his shock and dismay of being “swarmed” by overseas Indians within his own community!

In an interview with the state media, Mr K. Varatharaju, 43, a factory owner related his own experience when he sent his youngest daughter to Sarada Kindergarten in Bartley Road: He discovered that she was one of only two Singaporean Indians in the class of 15.”

Personally, when I came across the above report at a local so-called ‘activist’s’ site, I was quite appalled at the perspective of the ‘Singapore Indian’.

Why, I wondered, is he reacting exactly like many Chinese in the face of foreigners? Yes, the Chinese have been taught to 'prefer their own', through not only their highly state-controlled history, but in the period when Singapore moved away from westernisation and multiculturalism in favour of the Chinese and Legalism-Confucianism.  It should be expected that the self-centredness and arrogance that this inevitably engenders would explain their xenophobic and racist character.  But the Indians seem to be exhibiting this stance as well in the face of the New Foreigners as well.

Have both the Indians and Chinese forgotten that they too started off as immigrants in a Malay country?  And for most, they are only the 3rd or 4th generation 'locals' here aren't they.

If both are inclined to think that migration is followed by progress, then why is it that it is only applicable in the past?

And does the focus on the influx of 'foreigners' not detract one from existing inequities on the home-front that might be the cause of much of the economic strain felt by locals?

And are Chinese complaints about 'integrating' foreigners simply a reaction and symptom emerging from their being accustomed over decades to not having to integrate culturally with other non-Chinese locals, thus rendering them quite critical of this new influx of difference?

If they don't think they ought to have integrated with the Malays when they first came into Singapore - to the point that singapore might have already had a Malay or Indian PM - then why are they hankering after integrating foreigners into 'singaporean' culture?

If anything, the whole approach toward foreigners is more of a freudian-slip indicating gross deficiencies in the perspectives of, now, all singaporeans, and the 'oppositional' sector.

But the tragedy of it all lies in the fact that with falling Chinese birth-rates, and the government, according to some, opening the door to mostly Chinese nationals to keep up the 'racial balance', that in turn began to threaten the relatively privileged position the Singaporean Chinese had enjoyed till then.  That can most plausibly be appreciated as the reason why much of the ‘oppositional’ sector began to kick up a fuss.

My comment at the aforementioned ‘activist’s’ site follows : [elaborated, slightly, for clarity]

By the way, the word is 'swamped', not 'swarmed'. And i would direct local 'activists' to study the phenomenon of Enoch Powell in the UK who also took a similar stance in the face of difference. And as for the 'Singapore Indian', I would welcome that in the hope that the 'expat' Indians in Sarada Kindergarten might be able to teach your child a thing or two about 'being Indian' since the generally Confucian milieu in singapore is going to deprive your child of an alternative take on things. In that, your child might be able to grow up and contribute perspectives that are sorely needed in a climate where there is generally none but one.

I wonder why the father of this child does not deem it a problem that there are more Chinese singaporeans than Indian singaporeans in singapore. Perhaps losing out to the Chinese through government policies and popular marginalisation now leads him to hope that he can at least hold second place without competition? Perhaps if efforts were made to bring about egalitarianism amongst all 'local' races, then his child may be at least as equally disadvantaged as the 'local' Chinese.

Indians historically, have never really had a problem with different races. Perhaps this just goes to show how Confucian this 'Indian' has become in his mentality.

The 'Indians' in singapore really ought to engage in a major rethink on what it means to be 'Indian'. If they did, then they might realise that whilst they might be a minority in singapore, they might not really be Indian.  Just compare yourself to the Indians from the subcontinent and you'll see a vast difference. Or if you don't want to do that, compare the 'Indians' now to the Indians of the 80s and you'll see quite a big difference.

You people ought to study how empathy and multiculturalism is pursued here in the UK. Things which you fellas don’t bother about cause a major uproar here. That is why Indians and other minorities hold a relatively respected position here, and not in Singapore.

People need to think about how to bring about egalitarian harmony and not harmony despite egalitarianism.

As the anti-fascists and socialists in the UK would say, the problem is not really in immigration but in the class divide. In singapore, there is the class divide between the privileged state capitalist sector and the people, and a further class divide amongst the people along racial lines that sees more of ‘the majority race’ making it to the top given the host of advantages afforded them as opposed to ‘the minority races’.

It seems that when people learn to accept such a racially hierarchicalised ordering of society, and are confronted with an influx of foreigners, they make sense of it along racial and 'foreign' lines as well.  Thus, the Chinese kicking up a fuss over Chinese nationals and foreigners not 'integrating' with the 'locals', and the Indians reacting likewise in the face of Indian nationals. Both are forgetting that these perspectives are consequences of prior apathy that was left unaddressed.

Let’s not pretend for the sake of an apathetic ‘harmony’ that their plight is the same. That just adds insult to injury. People need to think about how to bring about egalitarian harmony and not harmony despite egalitarianism. What we need is more equity between the government and the people, and more egalitarianism between the various ‘races’ comprising ‘multicultural’ singapore. And if this had been brought about, there might be less need for foreigners. The desire to maintain profit for the upper class, and the desire to maintain a 'racial balance', comes together to exacerbate matters in this context and basically turn people into xenophobes, racists, fascist, apologists for it all, along with becoming debilitated intellectually and creatively.  That is the true problem, not the inflow of difference or immigrants.

Given the intellectual stupor that accompanies the institutionlisation of apathy and racism, it is not surprising that this requires an inflow of foreign talent to get around said stupor. Monocultural societies generally require people from multicultural ones to come in to help alleviate the intellectual and perspectival docility that ensues with the former. The 'it's like that one lahhh' mentality ('that's the way it is' - a phrase commonly heard amongst the Chinese, in the face of complaints regarding the status quo) has finally brought its consequences home to roost.

And I cannot but be flabbergasted at how the Indians are now being roped in to join the Chinese in their opposition to immigrants as if their problems are one and the same.

After all, if all immigrants were to be sent back, does that mean that there won’t be a ‘Mandarin-speakers’ preferred criteria for quite a few jobs; or that we'll see the promotion of Chinese culture and language being displaced with the promotion of all; or that the ‘mother-tongue policy and SAP schools system will be acknowledged to have advantaged the Chinese over others; or that Indians and Malays will not be cast as corner-shop proprietors, parking attendants and obese rockers whilst the Chinese are cast as professionally versatile in the media; or that efforts will be made to enhance feelings of self-efficacy amongst the young of all ‘races’ through media representations; or that 'dark skins' will be appreciated as beautiful as ‘fair-skinned’ Chinese - as it is in the UK; or that instead of a prime minister stating that singapore won’t have a non-Chinese PM soon because people are just going to vote according to their biases, he is going to do something about said biases; or that the Chinese oppositional sector are going to kick up a fuss for all of the above like they never did in the past? Please spare us the hypocrisy and start practicing some true egalitarian approaches toward multiculturalism for a change.


My hope for singapore is that it moves away from its apathetic harmony - so that singapore will stop being known as a 'Chinese country' in foreign climes, or that Chinese nationals will stop thinking I'm lying when I say that I'm a singaporean because they think along the lines of others from said foreign climes - to one based on egalitarian and mutually appreciative and respectful harmony.

Much can be gained from such a fusion as the perspectives of the hinterlands of the Malays, Chinese and Indians will come together to produce something truly unique and pregnant with potentials possibly hitherto unseen in any of the said hinterlands.

Unfortunately, what these are will not be known till it is brought to fruition via the empathetic backs of all regardless of 'race'. Cultural pride has to go on hold and be invested in the culture that can be formed in the future when all 'races' will move to being dialect groups of one singular Singaporean race where maintaining a 'racial balance' will mean nothing more than ensuring that there are enough races around to ensure that the perspectival development of the nation is not pursued along the perspectival path of just one 'majority' racially-defined culture.