Why is China making a fuss about the Nobel? 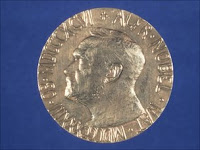 “..the Nobel Prize, for whatever discipline, still maintains an extraordinary resonance in China.

It is linked to the pursuit of modernity, global recognition and academic and intellectual excellence that the country has tried to pursue through its educational and economic policies.”

Well, yes....and a bit more than that actually.

Unlike, for instance, India, where intelligence was not identified by the degree to which it was cast in a prominent position, in China, it was.

The pogrom against difference, initiated by the fascist megalomaniac, Qin Shih Huang Ti (‘Yellow Emperor’, who begin the fascist history of the Chinese in 221 b.c. with the Qin dynasty, and broke away from the more vibrant intellectual ethos of the preceding Chou era), saw the centralisation of the education - or more aptly, ‘memorisation’ - system. To create a nation, or more accurately, a herd of followers, who would leave the business of politics and thinking to the ‘professionals’, it was necessary to ensure that generic intellectual development was monopolised by the elite whilst the rest of the peoples of China were left to become ‘professionals’ in their respective tax-paying professions.

If one was to take a look at 2000 years of Chinese philosophy, one will find, quite shockingly, gross philosophical stagnation that is quite unrivaled by any other region on the planet. Not only was philosophy stagnant, but it was largely confined to the material or ‘real’ realm as opposed to the metaphysical which was far more advanced in the case of, say, the Indians and western Europeans. Hence, what i would term, ‘popular intellectual individualism’ died the death with the ascent of what might very well be the very first ‘führer’ in history in 221 b.c.

Interest in the metaphysical is always quite the troublesome thing, politically speaking. Intrinsic to such interest is the implied admission that one could be very much wrong even when one thinks one is pretty much correct. Yes, you can be right, but that would be dependent on the premise upon which your assumptions are based. So the westerners, and Indians, kept digging away and constantly undermined the basis upon which their previous beliefs were based. Not so with the Chinese elite, who, for the sake of political longevity and self-serving cultural stagnation, did away with the metaphysical, and thus blinkered the perspectival development of the Chinese people within the ‘real’, or ‘practical’. Pity.

And it is within this context that we can begin to understand why the Chinese elite are foaming at the mouth and calling all those nations who attend the nobel prize-awarding of Liu Xiao Bao, ‘clowns’. Ad hominem, my dear China, can serve, as do exclamation marks/capitalised letters/emboldened letters, in an argument. But they are a poor substitute for argument.

Anyway, given that the Chinese elite, since before the time of Christ, have been assiduously training those whom have had the misfortune of being interned within their political and cultural auspices, to ‘don’t think, just do’ as they’re told by the prominent and powerful, it is no wonder that they are taking great exception to Xiao Bao being elevated to such prominence on a global scale.

The worship of prominence engendered by 2000 years of fascist rule in China thus raises the stature of both democracy and the Nobel award-winning efforts of Xiao Bao. I’m sure the Chinese elite would prefer it if Deng Xiao Ping, the bloke behind the mass murder at Tiananmen square a couple of decades ago, was given the Nobel peace prize award as he certainly did bring about ‘peace’ by dispatching much of the opposition to the grave - something which singapore’s ex-PM and currently ‘Minister Mentor’, Lee Kuan Yew also supported - I also heard that Singapore’s sinocentric government is also planning to erect a statue of Deng Xiao Ping at its waterfront. Unbelievable.

To those whom aren’t aware, the final goal in the legalist-confucian perspective is harmony and peace, not justice. Justice is urged, whilst peace and harmony is more assiduously pursued. Hence, it is to be expected that where the peace and harmony is fetishised, justice is compromised. It is no wonder, given this pretty mephistophelean perspective, that the Chinese do not deem anything amiss with their own stand on the issue.

As for Xiao Bao, or ‘small bun’ - i think that’s what ‘xiao bao’ is, upon translation - keep up the good work mate.