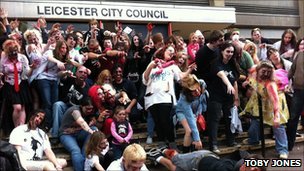 I’ve always said that stupidity is transmitted far quicker on the net than information. One of the reasons being, of course, the net being largely populated by young’uns who are more in-tune with the modern present than the intelligent past.

It all started with some jackass using the Freedom of Information Request to ask if the authorities are prepared for a zombie attack. The Leicester City Council admitted that it did not have any plans specific to this situation. So this idiot, a Mr Dixon, or more like ‘idiot Dixon’, decided to call for a zombie attack and about a 150 rose from their cubbyholes. They call it a ‘shamble’. Said, idiot Dixon, “We went for a shamble. We shambled from the clock to the city council offices - about half a mile through the city centre.” Well, I suppose the term ‘shamble’ sounds much nicer than ‘simply being stupid’.

“It followed news last week that a "concerned citizen" had used a Freedom of Information request to ask how the authority would tackle a zombie attack.

Leicester City Council conceded it had no specific emergency plans in place,”

If ed was on the council, and asked what we'd do if there was a zombie attack, I’d have simply stated,