Are the english-speaking Chinese more egalitarian? 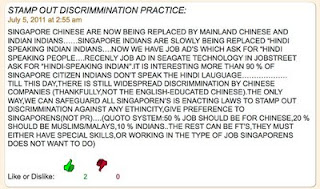 The following is a statement by a commenter on the neo-nazi site, Temasek Review beneath the article, 'If Indians are having more babies, then is it our mistake?'. (comment link) (Her/is caps lock must be jammed.  I don't understand why some people do this.  Perhaps they think they'd get more attention by capitalising everything.  That wouldn't be achieved as it just makes it more difficult to read.  Silly gits. But quite good points though.)

"Till this day, There is still widespread discrimination by Chinese companies (Thankfully, not The English-Educated Chinese)."

Not true. The 'English-educated chinese' are 'educated' socially to not bother about any perspective that is not 'chinese' in origin - reinforced by the English and chinese media, cultural celebrations, SAP school system, not having a problem with singapore being turned into a chinese state, etc, etc, etc. Look at the Syed Alwi Tourist Board. It ignores the non-chinese in all 4 languages, not just Mandarin. You can say that they ignore difference in English. That is an inevitable consequence of the government’s policies over the past few decades. Any race, ‘favoured’ in such a manner will tend to become self-absorbed. The chinese, be they ‘English’ or ‘Chinese’ educated are not insusceptible.

If you want to talk about 'English-educated Chinese', you'll have to look at the English-speaking Chinese of the 70s who didn’t think it ‘cool‘ to speak mandarin, and didn’t see it as an ‘advantage‘ either. Those ‘Chinese’ would certainly wonder why on earth a statue of a Chinese Premiere-cum-mass murderer - Deng Xiao Ping - was erected in singapore not too long ago; why Mandarin is promoted as ‘cool’; why one has to ‘Speak Mandarin, it’s an advantage’; and would wonder why there has to be a ‘mother-tongue’ policy that advantages the chinese at the expense of the other races or why people should study their ‘own’ language (want to do that, they should bugger off back to their respective countries of origin...it doesn’t promote fusion mate.); why much money was spent reorienting the Singapore Flyer to keep it line with the dictates of so-called feng shui ‘masters’...charlatans would be more apt. These English-speaking ‘Chinese’ were truly 'English-educated' in their appreciating difference, not bothering so much about 'chinese culture', and viewing all chinese who stick to their traditions ‘because its our culture mahhh’ as 'chinamen', 'ah bengs' or 'cina' - i speak from personal experience with these English-speaking Chinese in church. (Risen Christ, Toa Payoh) They did not ‘take pride’ in ‘their’ culture because they saw themselves as Singaporean and a fusion of singaporean cultures as ‘their’ culture, and preferred a more 'western' identity as this enabled them to look beyond what was supposed to be 'their culture'. (Part of the reason why they thought in such away was also because of a more individualistic western/american 70s and 80s culture that had swept the world unlike the more conformist American culture that emerged thereafter.)

(passive racist: one who isn’t a racist but who has reaped the benefits of racism because they are ‘preferred’, given added motivational/educational experiences not available to the non-chinese. active racist: one who is racist. We cannot appreciate racism solely by intention and attitude (active), but by consequence (passive) as well. passive/active racist - author’s terms.)

The point here is not to vilify the english-speaking Chinese, but to make the most of their potential to be egalitarian by reminding them that moving on from bothering about their own interests to bothering about the rights of homosexuals and lesbians or the birds and the trees is not evidence of egalitarianism. It can be nothing but their moving on to those interests that still impacts on the interests of the Chinese even though it may have positive effects on the non-Chinese whom share similar interests. That is a coincidence of interest, and not a conscientious direction of effort for the interests of the non-Chinese per se. It is good that more Chinese, english-speaking or otherwise, are becoming involved in homosexual and lesbian interests, and becoming environmentally conscious as well. This is good, and is evidence that they are moving beyond group interests. That should be worked on to making them more egalitarian. They should be given the chance to do so, and hence, this article, amongst others, serves as a reminder of the greater potentials of their currently narrow egalitarian drive.