The Office, a 'fake reality' show? What rubbish. 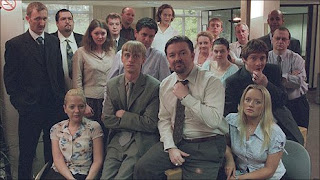 “Ricky Gervais and Stephen Merchant's fictional creation centred on the lives of workers of a humdrum suburban company in Slough.

Filmed in the style of a fly-on-the-wall documentary, the programme was unnervingly realistic and could be difficult to watch.

But its raw comedy value - led by Gervais as hapless central character David Brent - helped the show to a clutch of Bafta awards and a Golden Globe in the US.
The formula has been successfully exported around the globe, with many countries giving it their own local flavour. - bbc”

‘The worst comedy ever made’, Is what I thought when I first watched it some years ago in a gym in HK. So thought a British lady as well who was on the exercise bike.

Then we had ‘reality’ shows where people didn’t act but were supposedly themselves.

And then finally, with ‘The Office’, we had a ‘fake reality’ show where the actors pretended that it was real by taking interviews on camera at the office, or being aware that the camera was following them around.

Some might say that you need imagination to enjoy such a show. Well, the truth might be that you need to have minimal or no imagination to enjoy such a show, and not much intelligence either. That’s the thing with American-influenced productions. It requires you to check your intelligence and imagination at the door for you to enjoy it. That is why we have statements like, ‘it’s a movie. What do you expect?!’, or, ‘It’s a movie, why do you have to think so much?!’, or, ‘It’s a movie, why overanalyse?!’ Actually, the truth is, if a movie can’t stand the test of our intelligence, then it requires us to be stupid, or be well-practiced in shutting down our logical and imaginative faculties and be focused on the sensational or the obvious. In other words, it expects you to discount lots of information so that you can enjoy it.

Of course, we all know that the ‘Transformers’ don’t exist. But I found it quite entertaining - not very, but it’s quite alright. But the acting was believable in that the actor didn’t turn to the camera with a, ‘wow! look at how Optimus Prime’s penis is metamorphosing into a bullet train!’. That is the point where a show ceases to be believable. It bridges the gap between the real and imaginative world and asks us to still find it believable. I really can’t immerse myself in a movie which expects me to find it believable where the actor looks at me and talks to me as if it is real. Nothing short of an insult to my intelligence.

Something wrong with the world.