On 'new foreigners coming to singapore for money' 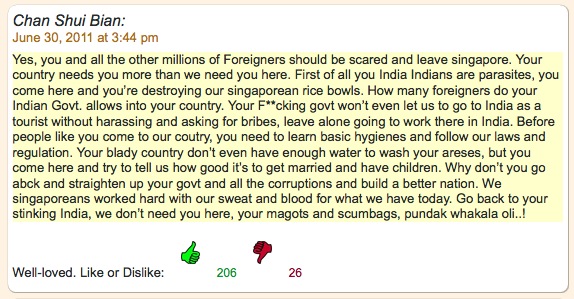 temasek review - If indians are having more babies then is it our mistake?

Yes, many of the new foreigners are coming to singapore for money. But what do you think the ancestors of the 'native-born' chinese and indians came here for? The view from mount Faber? A swim in the singapore river? Mee Goreng? (malay fried noodle dish) They came here for the money too. Yes they made it their homes. So if that makes it alright. Then perhaps the xenophobes and racists should be inviting these new foreigners to make singapore their homes right?


what do you think the ancestors of the 'native-born' chinese and indians came here for? The view from mount Faber? They came here for the money too.
But they aren’t. Why? The reason is simple enough. A people who, in the face of an authoritarian and self-aggrandizing government, and who discount it with an, ‘it’s like that one lorrr’,(as the confucianised chinese and other races do) will have little option but to access all forms of biases to put up with top-down pressures. It will enable them to get a job, promotion, make ends meet, and become a ‘success’. That is when racism, xenophobia, the formation of gangs (a hallmark of chinese civilisations since the formation of the anti-Qing ‘heaven and earth’ society or ‘Tian di Hui’), etc, comes in. You can say that is an economically prudential move to behave in such a manner. How else are they going to survive and ‘make it’ in such a milieu? Put any race within such a situation, and they’ll behave similarly. But if the state was multicultural and democratic enough, it wouldn’t happen to the same degree as the people would be vibrant enough to take issue with governmental self-absorption.

If the chinese made singapore their home back then, it wasn't because they loved it or anything like that. When they died ‘defending’ singapore against the Japs, they didn’t do it for love of singapore, but as a self-defence against Jap hatred of the Chinese. And if some, but not all, Indians supported the Japs, it was because of British occupation and exploitation of India. ‘Love of singapore‘ had nothing to do with local struggles against the Japs. Singapore wasn’t formed as a fused multicultural whole yet - it was really taking place in the 70s and 80s but cut short with the pogrom against multiculturalism and 'western values' by the government at that time. Many Chinese were fleeing from the numerous wars and strife that had been afflicting China through the colonial era, the Taiping Rebellion, Boxer rebellion, conflict with the Manchus, the Sino-Jap wars, civil war between the KMT and the so-called 'communist' movement led by the ignorant Mao, etc. You could say that they came to singapore as refugees. But we also shouldn’t forget the suffering the chinese had to endure at the hands of the ‘agents’ who brought them in as ‘indentured labour’. So, there is nothing laudable or 'patriotic' about our Chinese or Indian forefathers in singapore. Necessity was the reason for both the old and new foreigners.

But considering how the Chinese later kept quiet about the marginalisation of the Malays whom were the true original natives of singapore, and how they did the same with the natives of Taiwan, it is extremely cheeky and arrogant for any chinese to speak against foreigners, and especially when they have verifiably gone into other countries and treated the natives like foreigners after outnumbering them.

it is extremely cheeky and arrogant for any chinese to speak against foreigners, and especially when they have verifiably gone into other countries and treated the natives like foreigners after outnumbering them.
What bothers me about the anti-Indian comment by ‘Chan Shui Bian’ is not what he said, but the number of thumbs-ups s/he has gotten for it. I do not judge people by the racism or xenophobia of some, but the 'thumbs up' and apathy of others of the same race, the opposition, etc. After decades of interacting with the Chinese, i’m inclined to believe that the Chinese makes sense of reality after ignoring everything that doesn’t agree with their traditionalism-induced biases. I wouldn’t say, however, that it is intentional. It is reflexive. I suppose that’s what happens when one, regardless of race, is favoured over others and taught to ignore all contradiction to commonly held ‘majority’, governmentally promoted and oppositionally supported norms for too long - the chinese of today are quite the far cry from the Chinese I knew back in the 70s.

That leads to the production of, and competition amongst, equally ignorant people. And the more intelligent thinkers in such a milieu would most certainly be marginalised as they would threaten the continued control by the incompetent who will not be able to hold their position by means other than seniority, power and wealth. The infusion of ‘foreigner’ difference into such a milieu can only bode well for the growth of such a disabled people into independent and astute thinkers. The locals need to appreciate contrast for that and not engage in too much vision-narrowing ‘cultural pride’, or simply tolerating and ignoring contrast and difference as was the case when confronted with local Malays and Indians.

related article: To all new foreigners in Singapore: You ain’t parasites, the locals are