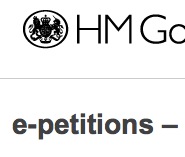 “The most signed e-petition on the No 10 website is one calling for convicted rioters to lose benefit payments.

"No taxpayer should have to contribute to those who have destroyed property, stolen from their community and shown a disregard for the country that provides for them," the petition argues.
It had more than 90,000 signatures at 6am and will be referred to the backbench business committee of MPs if it gets 100,000 signatures. - bbc”

If Willy boy, or ‘prince’ william to lesser minds, was to be involved in the rioting and looting, i’d say, yes, axe the git’s benefits.

What’s that I hear you saying? He has no reason to riot and loot?  Because he’s got everything a young person could want?   And he can aspire to any profession or pastime because he has access to all the resources required to exercise the equality of opportunity?

What these acts, such as council house eviction and benefit-denial is attempting to achieve is an exoneration of the system that caused these riots in the first place mate.And let’s not forget the effort to evict rioters from council housing if they are identified on camera.

Does anyone see the two terms being used here - ‘benefits’, ‘council housing’?

It isn’t ‘millions in bank balance’ and ‘luxury condos’ is it.  It’s ‘benefits’ and ‘council housing’.

So action is being taken against the disenfranchised for getting royally pissed off about it.

Oh yes, attacking some innocent bystanders or the 3 who were run down as they tried to protect their property is certainly a horrendous act.  But before I cast the stone at such people, I’d like to check to see if there is a millstone around their neck whose origins lie at a quarry of my construction.  If so, whilst punishing them, the last thing i’m going to want to do is further reinforce the conditions that led to their actions, i.e. pushing them further into a state of deprivation.

What these acts, such as council house eviction and benefit-denial is attempting to achieve is an exoneration of the system that caused these riots in the first place mate.