Filipina gets trashed by dim-witted confucian gits in singapore 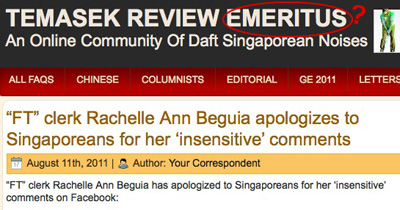 You dimwitted xenophobic twats have a lot to say about what Beguia said, but just about bugger all to say about the racist and xenophobic shite posted by the other commenters on facebook.  Is it any wonder that she takes on the tone she does.  What she said wasn't right, but what the other commenters said wasn't either.  All you xenophobic twits ought to be shipped back to china, regardless of race, or 'native born' status.  They love 'same same' over there.  What sort of parents do you people have man.

Oi Beguia, you shouldn't be apologising given the racist, xenophobic shite you had cast on you as a result.  If they took issue with your points and nothing besides, then yes.  Apologise.  But if not, your irrational comments serves to simply allow the illustration of the racism-xenophobic-apathetic nature of the rest of these confucianised singaporean gits. - TR


The situation was this.  This PAP MP, Penny Low, came under ‘heavy criticism’ for looking down at her handphone when the National Anthem was played during the National Day Parade.  The so-called uproarious singaporean ‘netizens’ took issue with her loyalty to the country since she was a Malaysian-turned-singaporean.  Then this women, by the name of Beguia steps up on Facebook to defend Penny with some remarks that were forceful, but mostly true,

“You have my unequivocal support as an important member of parliament in spite of what happen... just because you made a move during the national anthem doesn't put your loyalty to singapore in question. These moronic 'Singaporeans', their code, their morals, their 'loyalty' and 'patriotism'... all dropped at the first sign of trouble... just ask any of them if they want to be excused from serving NS and they will be the first to raise their hands... Require any of them to serve an extra month of NS and they will riot in Singapore... Ask them to fight a war, almost all will declare they are ready to pack up and run.

...But when foreigners like Bangladeshi, Thais and Indians come and provide labour for building flats and roads, you didn't seem to have complained about it.... if tomorrow the government decides to hire foreigners to become soldiers and no more serving of NS for all men let's see if you will make the same comment... By the way, if foreigners can come and snatch your jobs and flats it only shows one thing.... how incompetent you are. (ref. pictures below)”


Most of it is quite true when you think about it, except for ‘how incompetent you are’, which is probably meant to portray foreigners as more skilled than locals.  That, of course, is not always true because many, but not all, new foreigners are employed for being cheaper, and not because they are exceptionally skilled.  Bequia probably chose not to see that point as she’d prefer to think she’d been employed for her exceptional talent instead of her ‘being cheap’ - just like all the chinese in singapore would like to think that they made it because they are more intelligent and creative and not because of state-sponsored and popularly-practiced racism and discrimination against those whom are different or whom are more intelligent and creative.

I recall stating to my brother, who is a senior Lecturer of Law in one of the top British universities, that he can forget about such a position if he had to attend interviews conducted by singaporean chinese.  That’s a great thing about the UK.  You generally get to where you are on the basis of your skills, and not because you like dumplings for breakfast, lunch and dinner. (that is a metaphor for preferring what one is accustomed to....and which also explains why many Indian and Malay foodshops are now closing down in ‘multicultural’ singapore, or why both the chinese-controlled government and a significant proportion of the chinese population have been 'preferring' the chinese in the media, jobs, etc, for ages.)


As for the chimps running Temasek Review - who give chimps a bad name - they took pains to refer to Penny Low as ‘PAP Malaysian MP Penny Low’.  That, to me, seemed kind of strange as I thought, ‘How can she be a PAP MP if she was a Malaysian?’  Then I thought, ‘Oh, she must be a singaporean now’.  So why refer to her as ‘PAP Malaysian MP’ when the PAP, or ‘People’s Action Party’ - silly name that - is the government of singapore.  They obviously want to focus on her being an erstwhile Malaysian, and therefore worthy of the ‘foreign talent/trash’ term.

What just about pissed me off about this issue is that whilst everyone seem to be focused on some of the nonsense Beguia spouted, precious few, if any, had anything to say about the racist or xenophobic statements made in response to her. So I have a suggestion.  Why not ship the grandparents of the non-Malay ‘native-borns’ back to India and China.  That would bring the ‘foreign talent/trash’ numbers in singapore down don’t you think.  And toss in the urns, graves, etc, and you’ll be freeing up more space in space-stricken singapore.  That would be good for the environment as well as we don’t have to create a perfect environment for dispatching asthmatics to the grave during the hell-money burning periods when the chinese hope to better the lives of their ancestors in the afterlife because they were too busy being ‘practical’ and being politically apathetic to ensure that they have a good life in this life.  Tragic comedy isn’t it.

And I have to wonder why few took issue with the racist/xenophobic remarks posted in response to her like,

“why nowadays the maids so good life can use internet one?’, by an inbred cretin, Wesley Ng.

So even though she is a clerk, she is still classed or viewed as ‘maid’ because the locals employed and employ many as such.  It doesn’t matter if she isn’t.

Quite similar to how many chinese singaporeans refer to the current Indian president as ‘prata man’- but chinese presidents, PMs, etc, aren't referred to as 'kway tiao' man or 'bak kut tei' man (chinese dishes) and other indians as ‘mamas’ (a term used to refer to Indian corner shop proprietors, but is still used to refer to any indian whatever his profession or educational status.  I’ve been called that quite a few times as well by both acquaintances and friends as well despite my having more intelligence and creativity than all of them put together.  Puny-minded people, in general.)  And when any chinese uses such terms, no other chinese, despite her/is claim to not being a racist, would take issue with it.  That is why to stereotype chinese as small-minded, juvenile, and self-absorbed racists is not a stereotype.

The truth is, people who do not appreciate difference will inevitably become similar to each other as they will notice and learn from none other but themselves.  You can call it cultural inbreeding.  It produces as much perspectival retardation as does biological inbreeding.  And when such a people become predominant economically or numerically, as is, unfortunately the case in Qin-gapore, they will set the standard for what’s smart and not.  Thereafter, all intelligent and creative life is snuffed out.  Any wonder why blues and rock pubs have today been replaced with chinese restaurants and food courts.  Eating as culture?  What is left to distinguish between animals and human mate?

Man, I certainly can’t be blamed for wondering when these chinese are going to grow up and stop making a royal pain in the arse of themselves.  Too bad that the likes of ‘Mark’ (a chinese who comments here most insightfully) et al are a minority amongst the so-called ‘native-born’ Chinese.  So I feel kind of bad making this statement, but I have to remain objective lest I enable the bulk to be exonerated by the egalitarian-mindedness of the all-too-few.


in sum, and a bit about Filipinas,

I really hate Filipinas being trashed by those populating the perspectivally-retarded state of Qin-gapore and who, being so ‘practical’ that they can’t afford the time or sense to carry their own shopping bags, school bags, and army backpacks, or feed their own kids, have to employ filipina maids, and then look down on them for being more of a mother and a father to their children than they have the heart and mind to.    And as for Filipinas coming in to take ‘singaporean jobs’, these perspectivally malnourished plonkers don’t even realise that they are largely being employed by the ‘native born’ chinese.  Talk about gross retardation.

What just about pissed me off about this issue is that whilst everyone seem to be focused on some of the nonsense Beguia spouted, precious few, if any, had anything to say about the racist or xenophobic statements made in response to her.

I have a higher opinion of Filipinas then i do Confucianised singaporean women, or chinese women specifically.  Generally, they are highly adaptive, have a higher degree of humility, femininity, warmth, youthfulness, and vibrance.  But you’ll have to note one thing.  Filipinas have strong characters as well, but unlike chinese women, they do not usually look for men that they ‘can control one’.  They prefer real men, i.e. as strong as them, but if you aren’t, as is the case with Confucianised men, or men who think with their other ‘heads’, they’ll control you and take you for your money, which is the case with singaporean women as well.

As for Confucianised singaporean women, you’ll have to be an effeminate and closeted homosexual to marry them - as the women are more masculine than men.  One Chinese friend - a coffeeshop worker with whom i would chat with over tea, or play chinese chess with now and then - he’d thrash me every single time...haha ...a good learning experience though - even remarked once that singaporean chinese men are ‘very women’ (hen xiang ni ren - ‘very like women’)

I’ve often said, over the past decade, that singaporean women make a good case for homosexuality amongst men.  I also said once, in an irate moment, that God made Filipinas so that singaporean men with character, but whom had married singaporean women for want of choice, would have a good reason for adultery.  Singaporean women of today are too practical to be women.  They have no ideals other than ‘the ideal, controllable man’ - which quite describes the Confucianised singaporean, and especially, and more accurately, chinese men in general - ‘ideal condo’, ‘ideal bank balance’.....  It takes a real man, i.e. ed, to realise that.