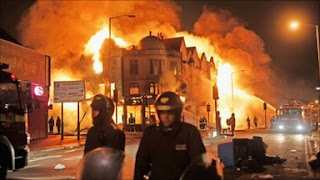 “I wonder why ‘Prince’ William and his bro, etc, aren’t joining in the rioting and looting” - ed

Let’s put it this way mate.  If all these so-called ‘thugs’ were afforded the same advantages as Willy boy, etc, would they be on the streets of London doing what they are?

Well, I suppose they’ve yet to be taught the relevant ‘asian’ (or more accurately, ‘confucian’) values so that they might say, with regards to their lot in life, ‘it’s like that one lah, don’t comprain, just work hard and buy 4d lorrr.  If really no money, can go look for tai-e-long lei, or work for him.’.

(translation to proper english, ‘that’s the way it is.  Let’s not complain about it and just make the best out of a bad situation, work hard on whatever’s left to us, and invest in the lottery whenever we can.  And if we really don’t have money, than we can take a loan from a loan shark, or become a debt collector.)

I suppose, if we were to use the juvenile logic of the elite, and those who’ve fallen for it, across the straits of the Atlantic (if you’re rubbish at ‘connecting the dots’, that is a reference to the u.s.of A, or, ‘the greatest nation on earth’ to subnormal minds)  you might say, ‘you’re either with us or against us’ as those clowns did post-11/9 (something wrong with the american dating system...9/11?) by so-called ‘terrorists’ with regards to the London riots.  One might allege that ed is ‘justifying’ the riotous behaviour of the ‘thugs’ of Tottenham, amongst others.  Sorry mate.  I’m a social scientist.  All i’m doing is pointing out the cause and effect here.

The borough of Haringey, wherein Tottenham is located, has over 10,000 people claiming jobseeker’s allowance.  One of its wards, Northumberland Park, is one of the most impoverished areas in w.Europe.  This doesn’t apply to Belgravia Square, or the vicinity wherein the deer, squirrels, and the Windsors roam.  I dare say that if the amount of dosh forked out for Willy boy’s wedding, dinner, honeymoon, and a change of sheets the day after, was channelled to this area, we would not be seeing this post-wedding effort to emulate his lifestyle amongst the looters and pillagers of Tottenham et al.  Well, given the electricity bill increases, i’d say these fires that are a-raging would enable nearby dwellings to switch off their lights for a bit.  I’m not making light of this situation (pun unintended).  I’m just shrugging helplessly and this human tragic-comedy.

I wrote once, some years ago, that the ‘Royal’ Family is a great social experiment that reveals the effects of an advantaged upbringing.  And now that the positive effects have been proved, we can end it, and apply the same environment to the less privileged sector of society.  But what society has done is to turn the beneficiaries of these advantages into objects of worship whilst depriving a significant sector of society from said advantages, and hence, emulation of her and his ‘royal highnesses’.

If you think about it, those whom just focus on the criminality of these ‘thugs’ are those whom are either ignorant, or have become accustomed to those compensatory and recuperative strategies required to render them compliant, and thus can’t understand the motivation behind these acts.

those whom just focus on the criminality of these ‘thugs’ are those whom are either ignorant, or have become accustomed to those compensatory and recuperative strategies required to render them compliant, and thus can’t understand the motivation behind these acts.And if you think about it further, you’ll realise that whilst the elite wouldn’t be thrilled about what’s going on, they are glad that they’ve successfully channelled the angst of the proles down criminal paths instead of these proles investing it in left-wing political organisations.

A combination of political apathy; the disabling of left-wing organisations; the right-shift of the left-wing Labour party; educational deprivation amongst the lower classes; etc, kind of ensures that when people get truly pissed off, they’re not going to realise who’s at fault and just compensate for their deprivation by making thugs and looters of themselves as opposed to insightful philosophers, revolutionaries, and activists.  This way, more effort will be made to police the proles as opposed to getting rid of the system that produces them.  And, in time, with enough learned helplessness amongst them, they might finally settle down and say, ‘it’s like that one lah, don’t comprain, just work hard and buy 4d lorrr....’

Keep it up Britain.  Keep it up, so that people will eventually fall for the notion that ‘being down is just a matter of choice’, like your cousins do in the ‘greatest nation on earth’, and all classes can become ‘harmonious’ despite relative disadvantage as is the case amongst confucian states.