Racism and Xenophobia in the BBC...and Ed’s Law 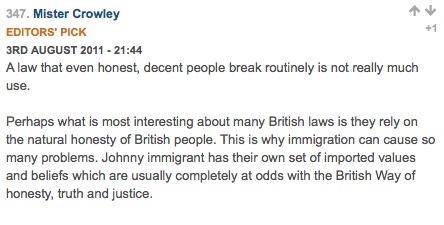 I was surprised to see the comment above given the ‘Editor’s Pick’.

A law that even honest, decent people break routinely is not really much use.

Perhaps what is most interesting about many British laws is they rely on the natural honesty of British people. This is why immigration can cause so many problems. Johnny immigrant has their own set of imported values and beliefs which are usually completely at odds with the British Way of honesty, truth and justice. - direct link to comment on the bbc website”

But that’s not to say that many Brits aren’t extremely fair-minded and egalitarian. I’m just saying that this society isn’t perfect, and as long as it has a capitalist system in place, and a ridiculous ‘royal family’, and people stupid enough to curtsy to these clowns, you won’t know what real ‘honesty, truth and justice’ is even if it bit you on the prostate.

For want of more perspectives, foreign and otherwise, a people’s claim to ‘honesty, truthfulness, and being just’ is quite synonymous with ‘gullibility, ignorance, and naivete’. That is a law. Ed’s Law.No culture or clime is perfect. People have their ups and downs in terms of values, and some, more so than others.  But that doesn’t mean that perspectives cannot be gleaned from others that our own cultural experience has blinded us from recognising.  Even the negative values of ours and others' cultures that has led to more advanced undesirable consequences can lead us to be more watchful of our own cultures and the infant manifestations of the former which we might not otherwise notice.

All that said, for the BBC to give that obviously racist and xenophobic statement an ‘editor’s pick’ might indicate a hidden agenda on their part. And the fact that it is given an 'editor's pick' beneath an article that is about legalising Dvd-ripping, and hence has bugger all to do with it says even more.  It is deemed an insightful and relevant comment even when it is completely irrelevant to the issue.

From hereon, we have to look with more scepticism at not only what they report, but what they might have left out if the above ‘editor’s pick’ is anything to go by when making sense of the vantage from which they allegedly and objectively report on things.