Does personal media make us anti-social?...and some personal SG experiences 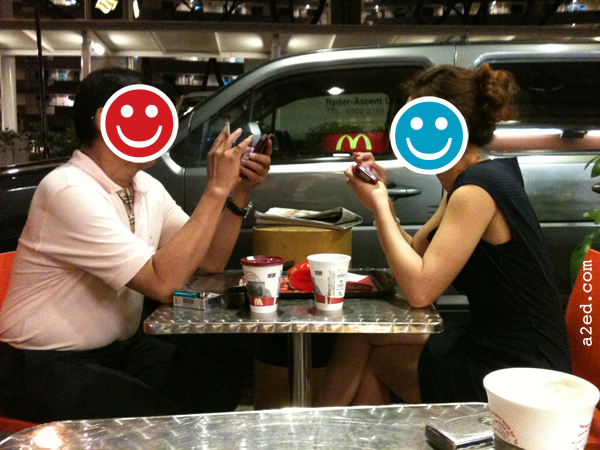 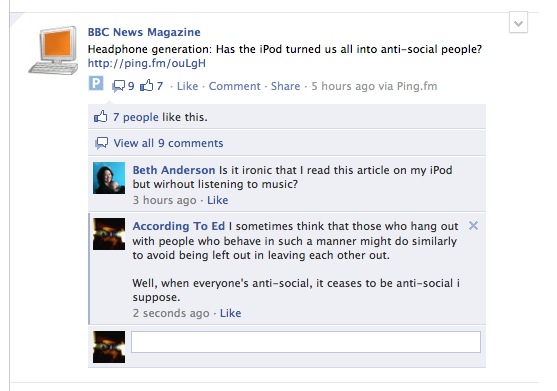 That's the problem with people these days.

Why?  The internet, and personal media like the iphone, ipod, hand-held games, etc,  i've often thought, doesn't bring people together.  It just gives them an opportunity to just stick with people of similar interest, or interests that they are familiar with.


Anyway, in the singaporean context,

It's strange that people can sit together, and get on their 'facebooks', ipods, angry birds, etc.

I recall sitting with a bunch of indians and chinese not too long ago.  The indians were talking about blues and rock music, whilst all the chinese - their wives and friends - at the table, without exception, took out their iphones and got on their facebooks or played some game.  The most surreal thing is that it happened every time we met - though i do know chinese whom don't do that, and the english-speaking chinese i knew in the 70s certainly weren't like that either.

Why?  Well, in the case of the singapore chinese of today, being taught to overvalue 'their own' culture, interests, perspectives, traditions, etc, it is not surprising that i encountered such behaviour.  Not good that.  If you think about it further, it is such tendencies that gives rise to political apathy, racism, xenophobia, and a whole load of other deficiencies.

Like I told V last night, before the iphone/ipod came along, they would just turn away; keep silent and then change the subject; don't ask any questions about whatever you are talking about; etc - which is what i personally experienced over a decade. Now, thanks to the iphone/ipad, they can just play 'angry birds' and ignore you completely. I suppose the more vibrant can get along with such people if there are other vibrant people at the table. That way, they wouldn't mind when half the table pick up their iphones when they start talking as there are others whom will be able to respond to them.

For myself, i always get involved in others' interests via questions, observations, etc.  But reciprocity, i've rarely encountered, no matter how long I've known them.  You get smarter of course, doing what ed does.  But they'd think you stupid since they never listen to enough of your interests and perspectives to realise that there is much they don't know.  That's how they can maintain the illusion of their own competence. Amusing isn't it.

Don't be like that.  Doesn't make you smart, or a nice person.