on the fallacy of the 'bi-polar' condition 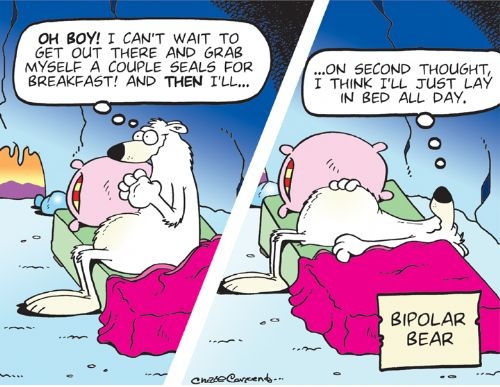 On the basis of reason, I refuse to subscribe to the belief and faith in the 'bi-polar' condition.


It makes people think that this is an internal/mental/psychological condition as opposed to a situational/environmental one. That entrenches them in this condition which can become a self-fulfilling prophecy where one can actually expect to have mood swings instead of realising that one's situation and a failure to formulate correct strategies is the true cause of their mood swings.

For instance, when a person is in a good/objective mood, that person who also believes that s/he is ‘bi-polar’ can actually expect this ‘good mood’ status to change to a ‘bad/depressive/anxious’ mood.  This belief itself can cause it to happen as it will lead one to expect the end of a ‘good mood’ and simultaneously lead one to begin focusing on information/memories of how one felt when in a bad mood previously/physical sensations like high heart-rate/etc that eventually brings it about - hence, the ‘bi-polar’ condition being a ‘self-fulfilling prophecy’ brought about one expecting it to happen.

I would put down the recurrence of a 'bad mood' in the absence of significant problems, to what psychologists term, 'misattribution'.  For instance,

1) you had a bad experience in the past, and this brought about physical reactions like a high heart rate.

2) in the present, you have a cup of coffee and this leads to a high heart rate.

4) after the cup of coffee, and with the high heart rate, it brings back the 'bad mood' because of the previous association between problems=bad mood=high heart rate.

So, in other words, you can just end up feeling depressed or upset even if there is nothing to be depressed or upset about.  And this can also lead you to overrate small problems which in the past you might not have been bothered by.

For instance, breaking the association between a 'high heart rate' and 'bad mood' by exercising/lengthy sex or masturbation/feeling anger at some political or social injustice - all of which leads to a high heart rate -  will break the association between 'high heart rate' and a general feeling of 'depression or anxiety'.  The same strategy can be applied to other physical/psychological conditions which can themselves be linked to, or 're-attributed', to other more positive or relaxing feelings.

Besides this, one also has to complement this strategy with exposure to positive stimuli (music, company, pastimes) and thinking objectively about things, or engaging in activities that hones our objective appreciation of things, like reading this site for instance;)]

To, objectively, appreciate that it is actually environmental variables, perspective, problem-solving strategies, pastimes, etc, that impacts on how one feels, it gives people more control over their moods than to just attribute it to an internal psychological condition which takes away much of the control required to determine it.

There are many more examples of such silliness, and thinking that the 'bi-polar' 'condition' is actually real on the basis of 'how one feels' is just one of the darker by-products of this very silly overarching milieu.