Brief thoughts on why Scotland should opt for Independence 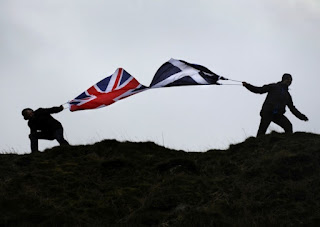 “Speaking before a trip to Edinburgh, the prime minister talked in passionate language about his desire to keep the union and insisted he wanted to make a positive case for keeping Scotland in the UK. However, his list of issues raised – including Scotland losing its seat (as part of the UK) on the United Nations security council – could be seen by opponents as an attempt to threaten voters into shunning independence in the planned referendum.

He said: "We're stronger, because together we count for more in the world, with a permanent seat on the UN security council, real clout in Nato and Europe, and unique influence with allies all over the world.” - the guardian

Scotland only needs the UK because the UK still includes the rest of non-England. Something like a skinny scrawny lad being only as strong as the toughies he is supported by. What i was wondering, when i came across this statement by Cameron is, is it that Scotland is stronger because, with Scotland being a part of the UK, it is represented in the UN Security Council, or is England stronger because the UK includes Scotland.  What clout is the UK going to have if n.Ireland, Wales, and Scotland were to vote for independence mate.

It seems to me that when you take this into consideration, Scotland only needs the UK because it still includes the rest of non-England.  Something like a skinny scrawny lad being only as strong as the toughies he is supported by.  And anyway, how much clout does Scotland have on the Security Council.  Or is Scotland to just be happy that it is being represented without its views being truly influential.  Something like fans of soccer teams getting a kick out ‘their club’ winning this or that match without actually having even touched the ball.

If Cameron wants Scotland to stay in the union, then do what Gandhi did, offer the prime ministership to a Scot, preferably from the party that wants independence.  If not, i’d go with ‘partition’.

As long as the capitalist and fascist status quo, continues reinforced by the Liberal-Con coalition’s efforts to re-Christianise the EU, amongst others, i’d say that Scotland stands to be sucked into this growing evil.

And as for not having the support of the British Armed Forces.  That’s silly.  Do you actually think that the rest of the UK is going to stand by and watch other powers take over Scotland?  Of course not.  The Brits won’t want another power at their border would they.  So, out of self-interest, the Brits would certainly not allow that to be the case.  So you don’t need to be in the UK to enjoy the protection of the British Armed Forces because they would want to protect British interests by not allowing other powers to take over Scotland.  So Cameron is just talking through his arse on this one.

Rather than have Scotland’s development be dictated by the English, i’d rather Scotland have its independence, consider alternative courses of self development, make the most of its cultural attributes, and then maybe later, consider a union with England along the lines of the EU.  A British Union or something like that.

In a nutshell, i’d rather have Scotland leave the union and join it again at some future date independently as opposed to staying in because they were forced to be in it a long while back, and then got used to it over time to the present.  That just justifies any power to annex any state because they can always rely on the state to eventually get used to it because of the ‘shared heritage’ they’ve had ever since, and the people of the annexed state being underdeveloped enough, and having developed enough coping and compensatory strategies to find it more palatable.  Basically, i'd rather Scotland join the union independently rather than staying in it after having been forced into it, and having gotten used to it.  That might be a small step for Scotland, but it is quite the major one for humankind given the message it will be sending out by doing so....for the right reasons.