dear PM Lee Hsien Loong: non-Cronyism must be seen to be done mate 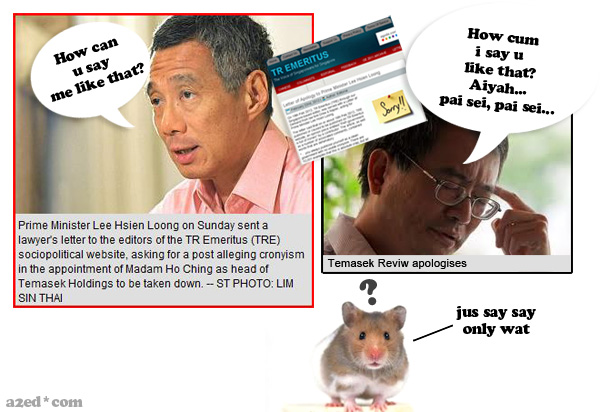 So singapore’s Prime Minister Lee Hsien Loong, son of erstwhile PM Lee Kuan Yew, the former of which became PM after the intermissionary PM Goh Chok Tong - like those intermissions in cinemas where people scamper off to the loo or to stalls outside - is kind of offended at Temasek Review (a singaporean neo-confucian/nazi/fascist site) for alleging that Mdm Ho Ching, the wife of PM Lee Hsien Loong, was helped to her position as the head of Temasek Holdings.

The above paragraph seems kind of confusing doesn’t it.  And i wouldn’t be surprised that if the reader, in an attempt to make sense of it, basically summarises it with an, ‘well, whatever it is, they all seem related to each other.’  Well, you wouldn’t be wrong.  They are, except the bloke Goh Chok Tong, who is only ‘related’ by race - just like the last presidential elections where the Tan clan put forth 4 Tans for the presidential elections - it’s no wonder with this racial cronyism, that singapore can now proudly have and msn address of - xinmsn.com.  I suppose that’s the chinese version of multiculturalism.

a one-party state, the existence of secret police, and the absence of transparency and democracy, is itself the very definition of cronyism, or at least the foundations upon which it arises, and the means by which its longevity is ensured. But i do know that, like justice, non-Cronyism cannot be assumed to not be done, but seen to be not done.  If not, given the relatively empowered position of those whom are alleged to be ‘helpers’ in the career advancement of those whom are alleged to be ‘helped’, the allegation of cronyism is not only possible, but plausible.  In a population of a few million, it is quite the coincidence that my son and his wife end up holding high offices after my verifiably iron-fisted reign over a nation.  At the end of the day, it is not merits of one’s son or wife that has to be held up as proof that one is guilty of cronyism.  It is by way of proving that none other are as, or more capable, that serves as proof that one isn’t guilty of cronyism. 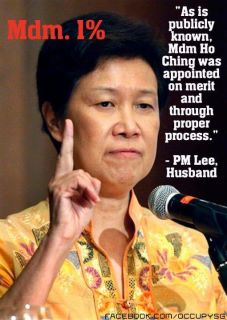 Given the lack of transparency, democracy, the existence of a secret police whom clamp down on political opponents every now and then, cronyism is just a natural consequence of the aforementioned circumstances as witnessed in history in many climes.  Hence, given such circumstances, it is not up to the people to prove that it is cronyism, but for the leader to prove that it isn’t.  And the only way to prove cronyism isn’t true, without the leader needing to make any effort to do so, is to ensure that the absence of transparency, democracy, a one-party state, and the secret police isn’t true.

If that is the case, then that stands as the leader’s defence against any allegation of cronyism, and s/he certainly wouldn’t need to have her/is lawyers send any notice to have such allegations removed from any site.  If not, a one-party state, the existence of secret police, and the absence of transparency and democracy, is itself the very definition of cronyism, or at least the foundations upon which it arises, and the means by which its longevity is ensured.

In other words, the leader should have to ensure that s/he never needs to prove that s/he isn’t crony-istic by ensuring that the government is transparent enough, and society is democratic enough, for society itself to as plausibly assume that there isn’t cronyism.  If not, one is simply denying the right of the tree to make a crashing sound after one has felled it.

Cronyism isn’t a problem in itself. Nothing wrong with that. But what it does indicate is the possible existence of greater evils that serve as the foundations upon which cronyism arises. And it is these foundations that serve to usher it from the realms of possibility to that of probability.
Secondly, no political figure of such prominence should be allowed to sue citizens for libel, slander, or anything.  Till transparency and democracy is true, the only means by which transparency and democracy may be achieved is by way of assumption and demand for justice, non-cronyism, etc, to be seen to be done.  Because, to do otherwise is to ensure that transparency and democracy may never be achieved.  And that, in turn, serves as the foundation for either the emergence of cronyism - be it by party, race, or familial lineage - or renders plausible the allegation that it is cronyism.  In the LHL condemns himself to such allegations by his own actions.  The same logic is used to clamp down on people who speak of the existence of racism as people who are inciting hatred.  These people have confused the effect for the cause.  A common occurrence amongst both the confucianised people of singapore and the government responsible for it.

Anyway, personally, i can’t be bothered if it is cronyism or not.  I can’t be bothered if LKY fixed up the prime ministership for his son or not, or if his son fixed up the position of head of Temasek Holdings for his wifey.  In a way, it is, discrimination of a lesser sort to say that your son or your wife cannot be a PM or head of a holding company of the assets of the people.  All we can do is to prove that they aren’t capable, and that there are others whom are more capable.  And if we can do this, and they aren’t replaced, then we can move on to claiming with an even greater degree of certainty that it is cronyism.


Cronyism isn’t a problem in itself.  Nothing wrong with that.  But what it does indicate is the possible existence of greater evils that serve as the foundations upon which cronyism arises. And it is these foundations that serve to move it from the realms of possibility to that of probability. The absence of democracy; the existence of discrimination at all levels that ensures that nobody will be as capable through oppression, persecution, etc; the existence of a one-party state of affairs; the apathetic condition of the people; the oppression of dissent; etc, etc, etc.  If i was the leader of the opposition, i wouldn’t bother with the effects of evils.  I’d focus my attentions more on the foundations that give rise to it - which is basically what a2ed.com is all about._._._._.connecting the dots.

Anyway, I can’t be bothered if the Lee family want to place all their loved ones from son to pet fish in positions of prominence and power.  All that matters to me is that my interests are more than adequately looked after, and there are none other whom are more capable to do so.  If the latter isn't true, then, family or not, they need to be replaced.  If not, then maybe we can allege that Hsien Loong is engaging in cronyism.  Or maybe he’s just being a devoted husband.  Well, that goes well with the asian ethos of filial piety i suppose.

And in singapore’s case, cronyism isn’t just possibly political, but national, cultural and racial as well - xenophobia, cultural self-absorption, racism.  These are just some of the significant conditions upon which cronyism emerges and thrives.  You’ll need to know, as stated, how to ‘connect the dots’ to appreciate that point.  And i have to wonder why the so-called opposition fuss about 'familial cronyism' whilst being oblivious to some of the foundations that give rise to it.  Weren't there four 'Tans' at the last general elections?  How is it that it's such a 'coincidence' that all 4 were chinese?  Then you can ask yourself if the self-absorption that led to this did not also serve to found the basis upon which familial cronyism might arise.

Every evil that we bemoan is supported by a host of evils which we take as 'culture' or ‘normal’.  The wiser mind will realise that it is our oversights that serve as the foundations for much that we whine about.  As i stated some years ago, ‘the root of all evils find its incubatory refuge in that which we perceive to be good’.