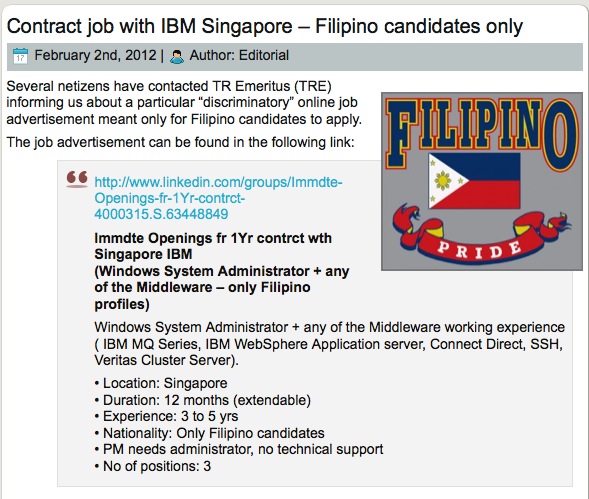 I don't know what the issue is here, and why Temasek Review, and their so-called 'netizens', think it an issue worth pursuing.


Oh, wait a minute, Temasek Review (which has, for some strange reason, given itself the title of 'Emeritus' - which actually is a term of reference to a former holder of an office, especially a professor.....how is TR relating themselves to that?  Perhaps they're using a dictionary purchased in their motherland) is a neo-nazi/confucian pro-singaporean chinese s(h)ite, and hence, it is no wonder that this is an issue to them, and their horde of loyal readers, whilst they do not similarly take equally vociferous and consistent issue with the ‘mandarin speakers/chinese preferred’ ads in singapore.  That is more of an issue given that the chinese are a majority, and this affects the non-chinese to a greater degree when it comes to job applications, promotions, and understanding what their chinese colleagues are talking about when they choose to speak in Mandarin as opposed to English over their lunches, brunches and what nots.

I do practice, in recent years, such ‘affirmative action’ myself.  For instance, i refuse to purchase gold from Chinese-run shops in Little India, i purchase expensive items outside of the country so as to not make chinese-run businesses richer, and favour purchase of food from non-Chinese-run food stalls over generally overpriced chinese food stalls.  I don’t like doing this, but if i don’t, i’m just going to be enriching the ‘chinese-preferred’ sector of singapore, and expedite the further degeneration of the non-chinese in singapore. However, I've yet to become objective enough to not help my chinese family and friends whenever they need it.

So, what i’m saying here is, till chinese supremacism and favouritism is addressed by these myopic, and sinocentric so-called ‘oppositional’ gits in singapore, whom, in their sinocentrism, are certainly corollaries of the government they purport to oppose, reverse discrimination is nothing but affirmative action designed to make life under chinese supremacism more palatable for those whom aren’t chinese.

From a more pragmatic approach, it would make sense for myself to ‘prefer’ Filipinos, which i certainly do, over the chinese.  The reason is simple.  A people whom are reared to ignore difference; whose only method of countering top-down oppression is by taking advantage of each other; aren’t really going to become very intelligent, receptive to differences, empathetic, develop the ability to compare and contrast phenomena with any great degree of sharpness; and won’t posses the ability to think out of the box as quickly or creatively as can those whom are products of more multicultural and democratic circumstance.  So, since the chinese are so allegedly into ‘being pragmatic’, it would make more business sense to employ people from other climes.

You could say that more 'Filipino/etc preferred Job Ads could actually be a damn good thing as it would force singaporeans, all of whom have been severely affected intellectually and creatively, to again contend with difference, and become smarter for it. The silly girls and boys playing at being ‘opposition‘ in singapore ought to wonder why the government is bringing in all these new foreigners.  The answer is simple mate.  In an effort to secure political longevity for themselves in the past, and set singapore on the path toward some sort of union with China (i made this prediction back in 1993 in conversation with some friends of mine) they had to make you dumb via monoculturalism, confucianism, and racial supremacism and racism.  Thereafter, they’ll need to bring in foreigners, or buy up foreign intellectual capital, to compensate for local stupour.  Think about it.

You could say that more 'Filipino/etc preferred Job Ads could actually be a damn good thing as it would force singaporeans, all of whom have been severely affected intellectually and creatively, to again contend with difference, and become smarter for it.  That can only bode well when it comes to getting you out of the shite of your own apathetic and self-absorbed construction.

(click picture above to go to Temasek Review ('emeritus') )