of 'sinkies', 'chinkies', and 'foreign trash' 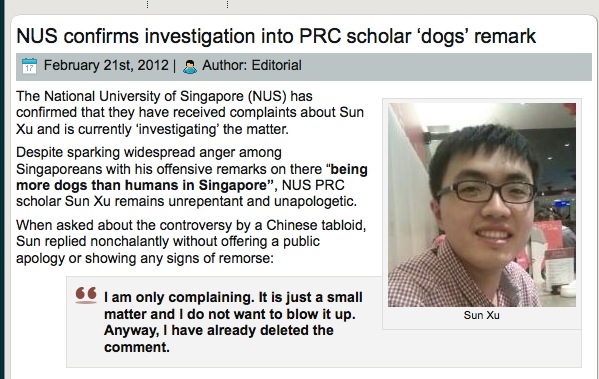 The following was placed as a comment beneath the article by Chua Chin Leng, entitled, ‘Paying foreigners with money to call us dogs’.


The article is reproduced in full below.  ed isn’t taking on CCL because of some personal vendetta, or because he talks sense, but as an effort to address perspectives, as contained in CCL’s article, which appears to be quite pervasive on the net amongst singaporeans.  This bloke is really good at summarising the pervasive sentiments.  Hence, ed choosing to take on his issues and addressing pervasive perspectives by doing so at the same time.   Alright.  On to the issue.

‘Despite sparking widespread anger among Singaporeans with his offensive remarks on there “being more dogs than humans in Singapore”, NUS PRC scholar Sun Xu remains unrepentant and unapologetic.
When asked about the controversy by a Chinese tabloid, Sun replied nonchalantly without offering a public apology or showing any signs of remorse:
I am only complaining. It is just a small matter and I do not want to blow it up. Anyway, I have already deleted the comment.’

The daft Sinkies have been bitten again, by the dog that it is feeding with the public’s money. How can the Sinkies accept such a situation, giving out money out of our generosity to be called derogatory terms by the recipient?

What is the moral of the story? Are we that dull? Are Sinkies offended? - source

Yes.  Singaporeans, thanks to monocultural confucian fascism, are indeed dull.  I've interacted with Africans, Brits, Indian nationals, China nationals, Filipinos, Americans, Australians, and have to say that 'dull', with reference to confucianised singaporeans is an understatement.  Pathologically moronic might be more apt.  It is inevitable that perspectival, intellectual, and creative docility be the lot of those whom choose one way as opposed to different ways.  Even in the academic arena, everyone knows that our being adept at any subject requires our attention to various schools of thought, and a variety of ways in achieving similar ends via variable methods.  The same thing goes with multiculturalism.  Get rid of multiculturalism, and its similar to reading only one book and expecting a degree thereafter.

Why is it on the one hand, you people condemn the new foreigners as ‘foreign trash’, and not realise that you are of foreign origins yourselves.As for paying foreigners with ‘our money’, you aren't paying these new foreigners with your money.  They are also making money for singapore, and hence, contributing to your paycheck as well.  You can only say what you do if most of these scholars do not stay in singapore to work after their education.  From my understanding, they would have to subject to a bond, and hence, we cannot talk about how charitable we are to those whom we sponsor.  Nobody works in singapore without singaporeans getting a return.  That's logic.  If you need to have a problem with the flow of finance, take issue with the confucian-capitalist system, and the people getting treated like the indentured labour of old.  In that, if there is anything foreign to the interests of the people, it is the government, and the self-absorbed and highly unintelligent ‘opposition’ that don’t realise these things.

In fact, we can also say that the chinese and indians are making money whilst doing so on Malay soil.  So you paying the Malays rent or something?  And let’s not forget that the ‘founding fathers’ of singapore are the British, not some Confucian imperium that has been ruling singapore ever since our foreparents made the big mistaking of demanding independence.  So whatever modernity upon which you are making money, we owe the Brits as well.  So let’s not talk about ‘our money’ as if we pulled it out of our ass after a plate of prata, mee siam, or  hor fun.  We owe a lot to those whom we aren’t paying for our gain.

If the same thing applied to your grandparents, i don't see why it doesn't apply to these new foreigners.

this is just part of Greater China, and ‘sinkies’ ought to be categorically divided between those whom are a product of multicultural singapore, and those whom have ignored it by saying, ‘we majority what!’ and switch on their channel 8 programmes throughout coffeeshops in singapore.Anyway, your ancestors and the ancestors of this guy who called singaporeans ‘dogs’ took a shit in the same place didn't they.  For all you know, they probably shared the same toilet roll or whatever equivalent they used back then.

And considering the fact that 'native-born' chinese singaporeans did more to ignore and exclude multiculturalism than integrate with it, it would be more accurate to distinguish between 'native born' chinkies (china-bred native born singaporeans) and sinkies (multicultural-bred native born singaporeans) as opposed to taking the latter as inclusive of the former.  In that, you and the PRC bloke are more same-same than you and sinkies.  To be a sinkie is to be a product of the multicultural ethos of the state - and in that, one wouldn’t take to xenophobia as many confucianised singaporeans.  If not, this is just part of Greater China, and ‘sinkies’ ought to be categorically divided between those whom are a product of multicultural singapore, and those whom have ignored it by saying, ‘we majority what!’ and switch on their channel 8 programmes throughout coffeeshops in singapore.

Anyway,  if you think about it, these PRC fellas are as averse to difference as you guys have been for a while, hence, your xenophobia and institutional racism.  Pretty hypocritical don't you think.  And pretty indicative of your being the same-same as well.