Sg PM Lee Hsien Loong: Being poor in singapore is better than being poor elsewhere


The exact statement being,


‘If you’re poor in Singapore, it’s no fun, but i think you’re less badly off than in any other country in the world.’ - todayonline 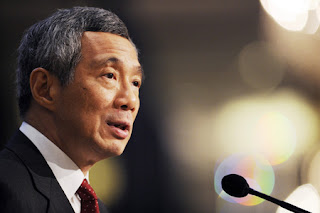 Well, well, well.  Before kicking up a fuss about such statements, i would direct the people to think about how they’ve exhibited enough stupidity for their leaders to not shy from making such statements.

It’s not like their leaders, from PM Lee Kuan Yew (Lee Hsien Loong’s father) to PM Goh Chok Tong (the interim PM before the former’s son ascended the throne, haven’t been coming out with such priceless gems of wisdom through the decades.  As the old adage goes, ‘every people deserve the government they get’.  You can be sure that Cameron, however much of a git i think he is, would never dare come up with such statements given the intelligence of the British public.

But then, if one was astute enough (implying that the ed is;), one would realise that what LHL is saying is true.  Yes mate.  True, Truey, True, True.  Haven’t you forgotten the oft-heard Chinese statement, stated in the face of socio-political-economic evils, ‘It’s like that one lah’, or, ‘everywhere in the world also like that one lah’.  (i’m not trying to ‘arrow’ the chinese here, but in my decades-old experience, it is a statement i’ve heard many chinese make often enough....though lately, i’m beginning to hear the non-chinese make it as well.  But we have to respect the origins of such statements so that we might give credit where it is due in respect of Intellectual Property and all that.)  If one was to trace the lineage of such a perspective, you would find it’s origins in the 2 millennia-old Legalist-Confucian ideology (that has unfortunately ruled, oppressed, and underdeveloped the Chinese people) that basically discourages the people from counterfactual thinking in the face of governmental pronouncements, traditions, culture, the weather, etc.

ignorance may be bliss, but it doesn’t absolve you of the consequences of your ignorance. But if you can attribute said consequences to factors other than ignorance or socio-political injustice, you can be blissful despite being as hungry as your counterparts in foreign climes. You cannot underestimate the value of the aforementioned statements.  It enables one to move from thought to action very quickly.  And by ‘action’, i mean, not fussing about things you can’t change and just working hard (that’s another thing i’ve often heard quite a few chinese say).  That is why, i have to say that the Chinese certainly deserve the credit of coming up with highly innovative ways to make shit more palatable.  I’m not being sarcastic here.  If we were to apply this Chinese ‘pragmatism’ in situations where things truly can’t be changed despite all human efforts, we would be able to make life as easy as possible and the best of it within such immutable circumstances.  In that sense, Chinese ‘pragmatism’ isn’t a bad thing at all.  It is a great thing actually.  And i can’t give that credit to any other culture to as great a degree as i can to the Chinese.

However, when you apply that approach in circumstances that can be changed, then, it just leads to governments/corporations laughing their way to the bank with your money - and making statements that imply, ‘it’s better to be poor in singapore than elsewhere’ - whilst the people, faced with increasing pressures, will have little choice but to become opportunistic toward each other, and become exceedingly self-absorbed and self-centred - as is the case in the singapore of today (and which might explain why the coffeeshop television at my coffeeshop is locked in to the chinese-language channel 8).  That is the result of an upside-down logic that goes, ‘why fight that which you can’t change’, without making an effort to change it in the first place (i’ve heard quite a few chinese of all educational levels up to graduates making such statements.  I wonder why they don’t make such statements when it comes to exams and say, ‘why study today if you can’t pass your exams in the future?’)

Over time, that sort of circumstances causes desperation to turn to greed.  And Marx’s ‘social alienation’ becomes a reality.  The problem with this ‘moving from thought to action quickly’ tendency, and stating, 'it's like that one lah' in the face of overarching evils is that overtime, it can breed in one a tendency to not think about solving overarching things and just focusing on coping with its consequences.

And it is exactly than tendency that adds truth to LHL’s statement that implies, ‘Being poor in singapore is better than being poor elsewhere’.  Basically, with enough coping strategies, the cessation of counterfactual thinking, self-blame, and social apathy, the poor can have a better time despite being impoverished.  That is how the poor are 'luckier' in singapore than elsewhere because they can blame their plight on an absence of luck and little besides.

Being Rich in Singapore is like having lots of Hell Money but no Life. Being Poor in singapore is like having little money, but still having as much life as the rich. I suppose that makes poverty more palatable in singapore than in other climes. If the poor can be forced to accept overarching evils as immutable, then they will be spending more time thinking about how to get themselves out of their poverty than demonstrating, striking, etc.  They will even blame themselves for their poverty when their horse of choice and pick of numbers, doesn’t come in.  They will tend to take pleasures in the exceedingly simple ‘pleasures’ of life, feeling extremely validated when some minister goes on a ‘walkabout’ and hands them ‘red packets’ once a year and a plastic bag of oranges.  They are going to feel happier as well, and not feel constantly pissed off because they’ve yet to view injustice as ‘it’s like that one lorrr’, ‘it’s like that one lahhh’, and not forgetting, ‘it’s like that one leiiii’.  Give them a cup of ‘teh siew tai’, a pack of ciggies, and 24hours of chinese programming at the local coffeeshop, and they’re in mind-numbing bliss.

That, dear people, is the (confucianised) singapore of today.  And that is why, in a nutshell, oh, sorry, in a cockleshell, it certainly is better to be poor in singapore than elsewhere.   If you think about it, the more one tries to get oneself out of poverty, the more one will also tend to blame oneself for one’s poverty.  Some may succeed in doing so, but it will simply cause others whom don’t succeed to blame themselves. (you can take that as another one of ‘ed’s laws’)  Singapore, as is the case in Confucian and Advanced Capitalist states (like the ‘greatest nation on earth’, the U.S. of A), have cultures that are well-designed to promote not only self-reliance, but self-blame as well.

...as i’ve stated quite a few times to those whom have had the sense to listen and consider, ‘ignorance may be bliss, but it doesn’t absolve you of the consequences of your ignorance.’  But if you can attribute said consequences to factors other than ignorance or socio-political injustice, you can be blissful despite being equally hungry as your counterparts in foreign climes.

....is basically what i said to V (chinese girl from singapore working in the UK, and with whom i’m living), when she told me about an offer she had in Asia which would amount to about close to 3 times the salary she draws in the UK.  In the UK, we might be relatively ‘poor’, but it reeks of empathy, curiosity in the face of difference, creativity, wit, and intelligence - which is what makes a human a human.  But in singapore, it’s like living in the land of the dead whom have coins over their eyes and mouths as is the practice in funeral rituals in some cultures.  You can have lots of money in singapore, but, you can only shop, eat, and gamble with it.  Perhaps that’s why chinese funerals, when the family can afford it (like my late Chinese father-in-law) is so elaborate.  They are hoping that they’d finally be able to give their loved ones the pleasures they deserve by burning them helicopters, branded handbags, and mansions......which, in this life, is reserved for their exploiters.  Strange isn’t it. But that's what enables them, i suppose, to put with that which the poor and empathetic elsewhere might kick up a fuss over.

But returning to what LHL said, for the sake of accuracy, he ought to have just said, ‘Being poor in singapore is better for the rich than elsewhere.’