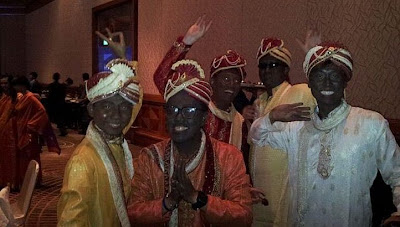 “Several Chinese employees of United Overseas Bank have raised eyebrows online after posting pictures of themselves in ‘blackface’ at a Bollywood-themed staff dinner. Pictures of last Friday’s event at the Fairmont Hotel were posted on social networking site Facebook yesterday. At least three men are pictured with their faces painted black, presumably because the event was Indian-themed and Indians have darker skin.

...…A Chinese reader, who e-mailed the pictures to The Sunday Times, said she found them extremely offensive. ‘It’s one thing to wear a traditional costume to a Bollywood- themed dinner, but another thing altogether to paint your face black,’ said the reader, who wished to remain anonymous. She said the pictures were offensive because they were ‘appropriating someone else’s ethnicity and treating it like entertainment‘.
And she was shocked at the captions and comments on the pictures, in which friends of the men said their get-up was ‘hilarious’.

Personally, i don't find the above insulting.  But i suppose it is because i'm inclined to think 'black' as beautiful, more passionate, and more richly toned....and the 'whites' here in the UK tend to think that dark brown, and black skin, amongst others, is more beautiful than 'pale white'.  After all, if you think about it, chocolate cake wouldn’t be as tempting if it was white.

However, if there are any problems with the above portrayal, it is that the chinese tend to think indians 'black' which is not accurate most of the time.  I wonder, sometimes, if the chinese have 'brown' in their vocabulary.  But to consider all indians as 'black' when they are not, whilst presenting themselves as contrastingly 'fair' - which is a word with relatively greater positive associated connotation in less perspectivally-vibrant climates - is racist.  It is in this contrasting context that we can begin to view the above portrayal as insulting.  Black, in itself, is not an insulting term or undesirable skin condition - except for the perspectivally-retarded out there (including people of all races in singapore who deem ‘fair‘ skin as superior to, say, a richly-toned brown/black colour).

The malays, indians and chinese - excluding ed - have their negative perceptions of black.  That is a fact.  The chinese view themselves as ‘fair‘ - as opposed to a more accurate ‘yellow‘, or an even more accurate, ‘pale yellow’, and which, i suppose, jaundices their appreciation of other non-fair colours - and all others as ‘black‘ even when they are not.

The indians also sport similar notions in their usage of the words ‘white‘ and ‘black‘ in describing the relatively greater ‘beauty‘ of the latter, and it is the same in India as it is in Singapore.  I personally had to tell of a 25 year old Indian boy a few weeks ago in a coffeeshop in Toa Payoh when he was describing an incident where he was attracted to the ‘white and fair’ skin of an Indian air stewardess on an Indian Airlines flight some years earlier - where he had said that he preferred his whiskey in a glass instead of ‘on the rocks’ when she asked him if he wanted the latter....and it wasn’t an attempt to be funny, which made it funny.  I’d say that the silly biases of every indian i’ve encountered in singapore over the decades just serves to compromise their position relative to the ‘majority’ whom are generally averse to difference of many sorts.  The indians ought to wake up and smell the chocolate.  And i can’t really blame the 25 year old much either since he was reared within a climate that is staunchly monocultural/confucian and does much to put down difference of all sorts.

The malays have the term, ‘hitam manis’(black beauty) which is used more as ‘black but beautiful‘ which basically implies that though one is termed as ‘black‘, even when one is dark brown, (i wonder if the malays and indians have ‘brown‘ in their vocabulary as well), one can still be beautiful, though not as beautiful as those whom are both ‘fair‘ and ‘not black’.  If black does not have negative connotations amongst the Malays, then there would be no reason to use ‘hitam’ as a prefix to ‘manis’ would there.  They don’t have a phrase that says ‘putih (white) manis’ do they?  That is unnecessary as ‘manis’ in itself means both ‘white’ and ‘beautiful’.  So to say ‘hitam manis’ is nothing but an attempt to maintain the notion that what is generally ‘black’ is ugly, but there are exceptions, and hence, when one encounters it, one acknowledges that the person is ‘black’ but still ‘beautiful’.  The Malays ought to go give this a think, because the racism they themselves encounter is due to the same irrational perspectives as that which founds the term, ‘hitam manis’.

some might say that there was nothing malicious about the ‘blackface’ event at all. But proving that there is an absence of malice in the act isn’t proof that it is not of racist originsSo, when we look at the ‘blackfaces’ in the UOB event within this context, and appreciate that the ‘blackface’ guise is presented as ‘hilarious’, it goes well with the general all-race and chinese-controlled-media-reinforced perception that all that is ‘white is wonderful’.  And given that Indian culture is generally marginalised, their language laughed at by quite a few, and quite a few Indians of prominence changing their names to sound more ‘white’ so that the chinese tongue can get around it, or so that they can distance themselves from the Indian heritage, the case put forth here that the ‘blackface’ event is racist moves from plausible to probable.

And one point that has skipped the attention of just about everyone, and which shows the event to be racist is the fact that it is a ‘Bollywood Themed’ party.  Excuse me mate, but singapore is largely south Indian.  Hence, choosing Bollywood instead of Kollywood itself ‘looks down’ on the south Indians in singapore, and their culture - which is not represented by ‘Bollywood’.  I personally dislike ‘Bollywood’s’ north Indian productions as i find them superficial, relatively witless, not philosophical, and they tend to make too much effort to monkey the west.  I prefer south Indian productions which are more Indian than any other part of India.

To choose ‘Bollywood’ instead of ‘Kollywood’ (frankly, i don’t like such terms that are derivatives of Hollywood, which, generally produces superficial rubbish designed for children) is a slap in the face of the local Indians, whom are generally of south Indian origin.  It’s not unlike the chinese preferring to be taught English by white ‘native speakers’ than Indians.  They just cannot acknowledge the fact that intellectually and creatively, they aren’t the ‘centre of civilisation’.  If one was to think about it, it is those whom acknowledge that they aren’t the ‘centre of civilisation’ whom are most likely to outdo everyone because they will spend more time learning from different others than celebrating the sinical Chingay - it should be ‘Singay’, not ‘Chingay’ mate.  But you need to not have a ‘central land’ mentality to realise that.  But, i’d excuse the organisers.  Perhaps they didn’t know the difference between ‘Bollywood’ and ‘Kollywood’.  However, even that is telling as it shows that the chinese know none other but themselves.  Very inward-looking don’t you think.

If some Indians and Chinese are offended by it, that might actually be racist itself in that the Indians and Chinese whom are offended by it both think that ‘black’ is uglySome might say that there was nothing malicious about the ‘blackface’ event at all.  But proving that there is an absence of malice in the act isn’t proof that it is not of racist origins mate.  I’m sure that those calling blacks, ‘niggers’, in the past, or chinese calling Indians in singapore, ‘mamas’, ‘Or lang’, ‘Gandhi’, ‘Kunta Kintei’ would similarly state that there was no malicious intent. (i was called the latter two by chinese in the 70s and 80s, and ‘Gandhi’ by a malay bloke in his 20s a couple of years outside a pub.  I told him ‘thanks for the compliment.’, and he didn’t know what to say after that.  Those malays whom are narrow-minded ought to keep in mind the degree to which the south Indians contributed to their civilisation in the historical past. i.e. their marriage customs, dance, etc.)   However, it is a diminutive statement all the same.

The way i see it.  The above just shows the chinese in the picture to be stupid, and isn’t really a slur on the non-pale yellow communities in singapore.  If some Indians and Chinese are offended by it, that might actually be racist itself in that the Indians and Chinese whom are offended by it both think that ‘black’ is ugly, and the indians don’t want this ‘undesirable’ fact rubbed in, be it with Kiwi shoe polish or otherwise.  It’s like, ‘i don’t like my black colour, and i don’t want others rubbing in this fact’.  In that, many of those whom are offended are offended by their own negative perceptions of the colour.  Being offended by it is not evidence of your not being racist.  Being offended by it for the right reasons, as stipulated in the above, is.   So everyone, regardless of race, should sit down somewhere and do some soul-searching about this.

Be like the ed.  Know that your ‘black’ colour is beautiful, and all whom think it otherwise to be morons - hell, i personally get lots of attention from ‘white’ girls of all ages for being ‘black’, and its funny that the chinese and other asians look up to the ‘white’ girls here for not being ‘black’, whilst they are busy ogling at ‘black’ ed.

In essence, the ability to appreciate the difference between extremes, i.e. black vs white, is evidence of superior intelligence.  To want to pigeon-hole difference and variation into a single category shows that the person wants to make sense of things quickly, and at the expense of detail -in singapore, a typically chinese trait.  That is frequently, and most pronounced in cultures where traditionalism and conformity is lauded.  Doesn’t bode well creative and intellectual vibrancy.

Whilst the chinese exhibit this deficiency at most times in this respect, given their being reared within a confucian/china state of affairs, the indians and malays should also be watchful of their own tendency to follow suit by their abiding by age-old biases originating from their own cultural climes or risk compromising their progressive development in other respects as well - which is already greatly compromised by their suffering the discrimination and underdevelopment that they do.  As i’ve said time and again to those whom are acquainted with myself, ‘you are going to be f*&%#$ enough by circumstances in singapore, so don’t make it worse by f&*#$@& yourself as well.’

As for the clowns in the above picture, i’d rather they integrate perspective-wise, instead of colour-wise.  I like difference, and hence, wouldn’t want everyone to be yellow, black, brown, or white.  If i do like people to be identical, it is confined to their integrative and multicultural outlook, as opposed to their looks.