Is the Singapore Gov trying to get rid of the old singaporeans? 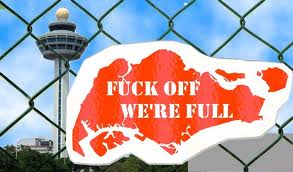 
The same thing was done with the non-chinese from the 80s onwards with those whom had more academic qualifications, and whom might be more of a thorn in the government’s backside, leaving the country so that the only ones left behind were either the lesser educated, or those whom being deprived of a more vibrant and intelligent non-Indian community, which was further exacerbated by the fragmentation of non-chinese dissent via the HDB-quota policy, simply shut up and attempted to make the best out of a bad situation, whilst adapting their children to such conditions in a way that they would cease to be indian enough to stand a better chance of making it in a chinese-centred climate.  That way, the more intelligent and creative indians either go so that they can maintain their standard, or can't afford to so and thus drop their standard.  That is why you can have 4 'Tans' for the presidential elections....haha.

Well, the chinese then, not being disadvantaged by such a scheme of things, and having more intelligent or vibrant competition from the Indians and Malays thus curtailed, sat back comfortably and benefitted from it - whilst being dumbed down at the same time.  So, now, it’s their turn.  Looks like ‘chinese pragmatism’ is pretty short-sighted isn’t it.

Anyway, whilst having a cup of overly-sweetened tea at my coffeeshop, and having a chat with an Indian taxi driver by the name of Selvam a couple of months back, I said,

“You know dei, the government isn’t dumb.  They are bringing the new foreigners into the country, and the population is expected to increase to a particular high number in a number of years right.  But what they aren’t talking about is that the new foreigners are also going to be reproducing at a higher rate than the ‘old foreigners’ (i.e. indian and chinese ‘native-born’ singaporeans).

So the new chinese, like the ancestors of the ‘native borns’, are going to be increasing the population by a greater number than the old chinese.  In that, new or old chinese, all ‘same same one’....haha.  They don’t realise that.

I’d say, what the government is banking on is that the current chinese singaporeans might just bugger off, like quite a few of the Indians I knew in the 80s whom were more educated, but couldn’t stand this scheme of things.  It’s not going to be easy for the chinese of course.  Given that, thanks to the government’s pro-chinese policies, they’ve become experts in ignoring difference and not adapting.  So they are going to find it pretty difficult to be comfortable in foreign and especially more intelligent climes, unless they go plonk themselves in some chinatown or somewhere where there are many whom are similarly afflicted and sell noodles and do foot reflexology to begin with.  But it will still happen.”

Then, Selvam, listening intently to what i was saying, interjected with, "Ah!  Yah maybe what you’re saying is right.  Now house-prices are rising, then they can sell up and afford to leave!"

“Ha, good point dei!  Damn good one.”, said the ed, “that makes it perfect doesn’t it.  The new foreigners come in, the house prices go up, and the so-called ‘native borns‘ can afford to pack up and split.”

“It’s a blood transfusion thing dei.  The government had to dumb the population via chinese cultural-supremacism and racism.  But the downside of it is that the chinese will slowly get dumbed down and become less creative, intelligent and more complacent since they didn’t need to contend with different cultures or approaches to things.  Anybody will get dumb under such conditions.  They know this when it comes to education.  That’s why they consider different perspectives in their syllabus.  But socially, they ignore it.  So you cannot expect much brilliance from such a people.”

“That is when new blood has to be brought in to replace the old sludge.  The chinese from china may not be very creative or intelligent, but like the ancestors of the ‘native-born’ chinese, they are either equally hardworking or ruthless.  And there is enough similarity between them and the local chinese for them to fuse.  So chinese dominance, or more accurately, governmental dominance via a kow-towing and don’t-know-any-better ‘practical‘ chinese population can still continue as it has in the past.”

“Anyway dei, either way, the government wins.  That is the chinese way isn’t it.  The new foreigners, especially the chinese, are going to give the local chinese the kind of ruthless competition and perhaps, discrimination, that the ancestors of the local chinese gave to the other locals in the past.  On top of that, you can see how the local chinamen go gaga over china girls or those 'beer ladies' in coffeeshops.  And given that in chinese environments, the women control the men, these chinawomen are going to nicely thumb-down the native-born chinamen and bend them to the will of the government by calling it ‘practical’ to do so, and ‘just work hard and stop complaining’.  Haha.  That’s what the local chinese like to say when we complain about the political situation, lack of democracy, and racism, now they also going to get their own ‘philosophy’ stuffed nicely into bite-sized dumplings and used on them as pacifiers.”

Anyway, we Indians and Malays are so used to getting ‘f*cked’, or have been so underdeveloped by it, that we aren’t going to feel it as badly as the old chinese whom aren’t used to getting screwed because they are part of the ‘preferred race’.  Well, they aren’t ‘preferred’ now right.  That’s why they get diahorrhea whenever they see non-chinese preferred job ads.

Well, there’s more to come.  It’s going to quite entertaining to see them get their just desserts.  It’s not often in life that we get to see self-centred people get what they deserve.  We are f*cked either way.  But have to say that it’s nice to see them finally enjoying the fruits of their previously self-centred labour.

Selvam looks at the time, and says, “Ok lah.  Got time for one more.”