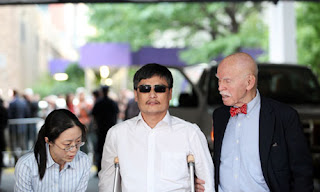 Given Chinese tendency toward self-absorption in s.e.asia, this bloke cannot rightly qualify as a 'human rights' activist but an activist for 'Chinese human rights'. Whether they are 'human rights activists' or 'Chinese human rights activists' will be seen when they bother about anyone else after they get what they want, or bother about anyone else whilst they are attempting to get what they want. Evidence doesn't really argue for the latter unfortunately.

The best way for a human rights activist to truly be a human rights activist is to show as much empathetic concern for those whose advance leads to no immediate gain for her/himself.But, as a sidenote, it ought to be mentioned that chinese self-absorption stems not from their dietary inclinations, or genetics, or as some idiotic people might think, inbreeding, but due to their succumbing to top-down oppression and self-aggrandizing control.  When any people succumb to this, they will have no other option but to do unto their neighbour that which is done unto them.   Hence, can be explained their lack of empathy and aversion to difference.

The best way for a human rights activist to truly be a human rights activist is to show as much empathetic concern for those whose advance leads to no immediate gain for her/himself.  In that, s/he will be able to train her/himself to be empathetic enough to notice her/is oversights when dealing with their own national or communal concerns.  The logic is simple enough...

If i can care as consistently and thoughtfully for those outside of my own group interests, it would be even simpler when i care for ‘my own’.  And in caring for ‘my own’, i’ll also be constantly aware of how my fighting for my group interests might affect the interests of other similarly or more disadvantaged groups as i'm already used to paying attention to the interests of others through the prior practice in bothering about others.  Finally, in paying attention to others' problems, I will also be able to acquire perspectives that can be applied to my own situation, along with paying attention to that which others view as problematic but which i have been taught to view as normal in my own country or community.  That which we are taught to view as 'normal' in our own country or community, but which is wrong, will most certainly give rise to evils which we will later bemoan, and attribute to other causes which relieves us of self-blame.

In observing the above rules, one can move from being just an ‘indian/malay/chinese/etc human rights activist’ to being a ‘human rights activist’ in itself. (which is why when I first started writing online, i spent about 3 years focusing on the global issues and the interests of others before moving on to 'my own'.)