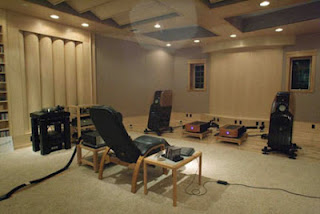 Some bloke told me a couple of weeks back that i was an 'audiophile'...as if that was a good thing. This bloke must have spent about 20k or more on his sound system....perhaps to remind himself that he has ears.

And i really don't get the term 'audiophile' or 'sound system'.  For such terms to come into common usage, you require a people who've moved from being creators and thinkers to mere imbibers.  Audio, sound....are just generic terms without any profound meaning that can only be derived from content.   Where are the 'musicphiles'?  That is, people who are 'detailed' when it comes to the quality of music, as opposed to just crystal clear sound.  Aren't we supposed to become adept at the first before moving on to the second?  Or at least complement the latter with more emphasis on the former?

......There is quite the difference between a creator and an imbiber. The latter is no different from one who sports a Rolex, drives a flashy car, carries or wears a Prada, etc, or spends a ton and a half on a stereo system.

It's like owning an expensive camera and a whole slew of equally overpriced lenses.  The question i will ask then is, what pictures have you taken with them?  I’ve had ‘friends’ (in xingapore...full of people like that unfortunately) who go ‘wow!’, or/and boast about my cameras and lenses to their friends, but aren’t bothered about the photographs taken with them, or appreciative of the composition, symmetries, angles, meaning, of the scenes captured.  I had a ‘friend’ who continuously brags about how he can hear Sade making a lip-smacking sound on one of her songs - which is basically him implying that his stereo system is so good that one can hear that.  But other than that, he can't insightfully appreciate any music, arrangement, or style with more than a word or two and nothing else besides.  That’s like reading a philosophical treatise of great profundity and providing a synopsis of nothing more than an ‘i like’ because the text is so sharp.  I often think to myself, at such times, ‘you have such a great sound system, but you have such bad ears....what a waste.’

Beethoven and Tchaikovsky, and other great composers of various cultures throughout the ages never had a great sound system, but created far more than those who own the most expensive stereo systems out there.Same goes for stereo systems.  What music have you created by being inspired by the great sound that comes from them?  Or, what other accomplishments have you achieved in other unrelated areas because of inspiration derived from the stereo system?  If there is nothing in one or the other case, it becomes a dispensable frivolity built-up to serve as a thus exorbitantly-priced identity parade designed to act as a facade for a personality that is hollow as pair of boots with no feet.  These are people with little identity who hope to be mistaken for someone simply because they sport something shiny and hence, ‘wow!’

This is the Age of the Imbiber.  The consumer.  The humanoid that draws its jerks and ticks from being connected to gadgets of all sorts whilst being devoid of any semblance of creativity required to create that which is transmitted through them.  Think about it.....Beethoven and Tchaikovsky, and other great composers of various cultures throughout the ages never had a stereo system, but created far more than those who own the most expensive stereo systems out there.

Remind yourself, everything one owns or acquires that is external is supposed to be a springboard for the creation of something that comes from within. If one gets stuck at the former stage, well, that's just sad. 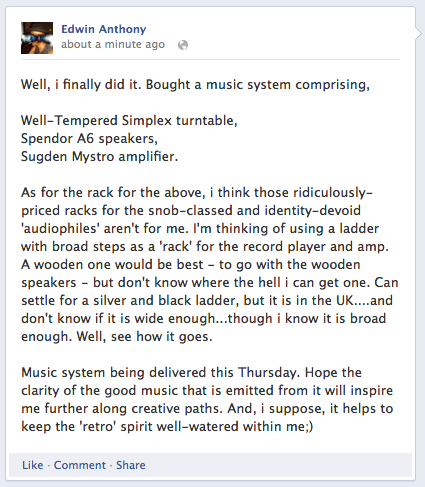