Are Olympians the Real Celebs? 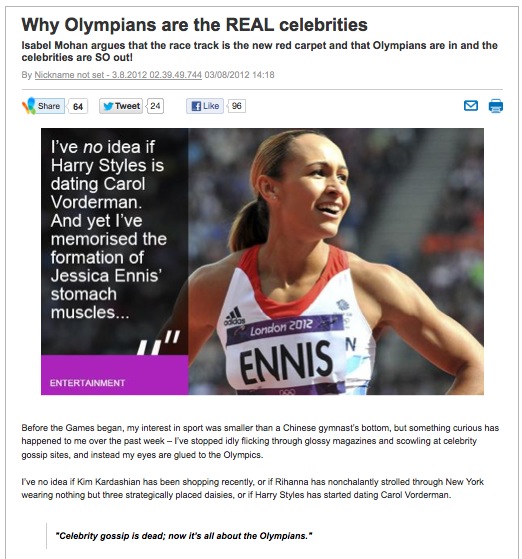 Before the Games began, my interest in sport was smaller than a Chinese gymnast’s bottom, but something curious has happened to me over the past week – I’ve stopped idly flicking through glossy magazines and scowling at celebrity gossip sites, and instead my eyes are glued to the Olympics.

I’ve no idea if Kim Kardashian has been shopping recently, or if Rihanna has nonchalantly strolled through New York wearing nothing but three strategically placed daisies, or if Harry Styles has started dating Carol Vorderman.

And yet I’ve memorised the formation of Jessica Ennis’s stomach muscles, acquired a fleeting crush on a swimmer from the Cayman Islands, and I even know my Tweddle from my Gibbons and my Wiggins.

Still, I thought my excitement would end there. After all, I was hardly going to actually watch other people swimming, when I can barely manage to go myself, was I? How wrong I was: I’m hooked.

There are multiple reasons why Olympians are better than celebrities: their tans are real because they leap around outside a lot, they’ve got a running track in place of a red carpet and incredibly blingy medals instead of vajazzles, plus any unfortunate camel toe incidents are an occupational hazard rather than an attempt to get papped outside a nightclub.

But of course, the real attraction is that these athletes – most of whom are just as young and gorgeous as your average popstar or reality TV wannabe – are incredibly talented and have actually worked hard, harder than most of us can even comprehend, to get where they are. OK, so a lot of sporty types aren’t exactly oozing with personality – they often talk in clichés and take themselves terribly seriously – but I can’t remember the last time a celebrity said anything interesting either. - msn


I think they are all quite good at what they do, be it in sports, stage, etc. But I view none as 'celebs', nor do I worship them, or think the millions they walk off with is justified. They deserve applause for their efforts in their sport of choice, and thereafter, we can turn our attention to other achievements of humanity that might be even greater despite their efforts not being accompanied with gold medals, sponsorship from macdonalds, or 6 pecs.

Sheep looking for a shepherd so that they might worship the latter for the millions s/he makes off their fleece, is what they are.

At the end of the day, if the world wasn’t largely populated by cog-and-wheel nobodies, people wouldn’t live their lives vicariously enough to make ‘stars’ and ‘celebs’ out of some actor/singer/sportster.  It takes a deep-seated inferiority complex to be either. Why would I worship someone just because s/he can run a little bit slower or faster than a quick footed animal?  Why would I worship someone just because s/he is adept at playing the fool or hero on stage? Isabel and her entourage of foolish fans need therapy.

It takes a profound inferiority complex for people to ‘be a fan’ or ‘celeb worship’.  How, pray tell, in their thus-diminished state, will they ever be able to judge what’s quality unless it is childishly obvious as in one being able to run faster than another, or one being cast in a prominent light on the silver screen.  Sheep looking for a shepherd so that they might worship the latter for the millions he makes of their fleece, is what they are.

The true celebs are those who work for humanity....i.e. Malcom X, Gandhi, Martin Luther King, Mother Theresa..... and all those unsung activists who fight to make this a better world/environment/etc. And if you think about it...these so-called celebs simply serve to distract us from what truly matters. Hence, to their gold medals, I say, 'pooh, pooh', and half.