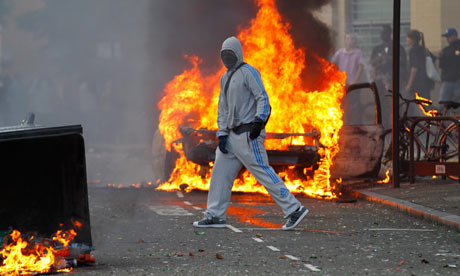 England's riots revealed "deep social problems" that still need to be addressed a year on, Mayor of London Boris Johnson has said.

"There are still deep social problems that we've got to address by looking at what happens in the lives of young people, their role models, their ideals, what they want to achieve. - bbc

What do the elite mean when they talk about providing 'good role models' for the impoverished and disaffected?

All this talk is about providing them with the 'right' role models to quell their disaffection so that they might put up with the source of their disaffectionAt the end of the day, all this talk about people needing 'good role models' is simply about providing them with people whom can tell them to put up with less so that a 'harmonious' society can be brought about.

In other words, a 'harmonious' society where the disaffected can transition to being nothing more than a celeb-worhsipping fan who has no problem living his life vicariously through those whom have more, be it via 'keeping up with the Kardashians' or wearing a t-shirt with your favourite band imprinted on it, or attempting to ape some Olympian whilst viewing others amongst your own as competitors whom have to be outdone so that you can gain at their expense.  I suppose the reason why the feminist movement, the black civil rights movement, the slavery abolition movement, amongst others, came about because they didn't have the 'right role models' to help them put up with what deemed to be their rightful place in life.

So the next time you feel you’re marginalised, take some Olympian as a role model, slip on a pair of trainers, and go for a jog.....even if it is to the unemployment benefits office.