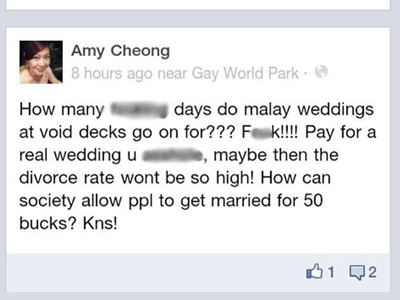 Said, Amy Cheong: “How many fcuking days do malay weddings at void decks go on for??? Fcuk!!!! Pay for a real wedding u asshole, maybe then the divorce rate wont be so high! How can society allow ppl to get married for 50 bucks? Kns!” - source

Poor Amy Cheong.  Nope.  No sarcasm intended here.  I really do pity her.  She is, after all, a victim of the generally racist state of affairs in singapore, and she is just a more, well, vocal result of it.

What she said about Malay weddings is absolutely ridiculous.  I appreciated, a long while back, that the Malay void deck weddings keeps alive the ‘kampong spirit’ with the meeting of the bride by the bridegroom in her neighbourhood.  And it also draws Malays of the locality and elsewhere together within this modern concretised ‘kampong’ of today and helps keep the communal spirit, which is the hallmark of the Malay community, alive, albeit to a small degree given the generally mutually antagonistic and apathetic confucian state of affairs.  Nice.  I personally like the colours, sights, and sounds of the occasion - though i do think that the music is a tad too loud at times.

Now the reason why i pity Amy Cheong is simple enough.  Let’s not forget that her main misdemeanor here is using the Chinese or ‘modern’ standard as the criteria by which the value of Malay weddings are judged.

the fuss created by people and ‘netizens’ against Amy and other similar miscreants is presented as proof that singapore is an egalitarian state, and that the majority are inter-racially empathetic and appreciative peoples.The Malays, according to Amy, should ‘have a real wedding’, meaning they should do as the Chinese do and book loads of tables for dinner; pay thousands of dollars so they can put on one fancy dress after another all over the country and have their picture taken; the bride’s female friends should stop the bridegroom at the door of the bride’s room and demand money before the bridegroom can claim his bride; etc, etc, etc.  So that’s a ‘real wedding’ i suppose.  I wonder why.

Anyway, what Amy is doing is not different from what most do on a daily basis in singapore, from the government to the people, albeit in a less obviously insulting fashion.  It is the imposition of predominant standards that have emerged with the officially imposed, and popularly acquiesced, preference for one race and standards over all others.  All 'others' are secondary, peripheral, mariginal, and hence, discountable.   ‘Speak Mandarin, it’s an advantage’; ‘Speak Mandarin, it’s cool’; ‘Singapore must always have a chinese majority’...said ex-PM Lee Kuan Yew; ‘Indians talk too much and ask too many questions’; ‘Malays are lazy’; ‘In two generations Mandarin will be our mother tongue’....again, said ex-PM Lee Kuan Yew; fair is beautiful; ‘if you want to get a job/promotion you must not ask too many questions or you’ll be deemed a troublemaker; the promotion of Confucian values; the importation of chinese from China to address ‘falling chinese birth-rates’; tudungs cannot be worn in schools for the sake of creating similarity with the chinese; 'singapore is not ready for a non-chinese PM'...said current PM, and son of LKY, Lee Hsien Loong; etc, etc, etc...... And most tellingly, there was hardly a word of opposition to this amongst the majority of the populace online and off.

And in personal interactions with the chinese since the 90s, i’ve often had to only talk about what they like to talk about.  Anything that falls out of their interest, or which contradicts their views even when supplied with evidence, and they’ll just turn away or change the subject, or just say ‘that’s the way it is all over the world’ - i’ve only met about 4 chinese in 2 decades who don’t behave in this manner - that wasn't the case in the 70s and early 80s amongst my Chinese friends.  That is my personal experience.  I suppose the maintenance of willful ignorance in the face of difference fortifies arrogance and reinforces one's illusory sense of self-efficacy.

So, given that even popularly supported Prime Ministers can spew and implement such racist tripe with impunity, are we to be surprised that the likes of Amy Cheong can rise to the position that she has in the NTUC, and think the way she does?

Isn't this an indictment of the entire sociopolitical and cultural system, and people, comprising this allegedly '1st world', 'modern' state of Xingapore today.

bbc article: Chinese love-hate relationship with what is foreign

What we have here, gentlemen and ladies, is the overarching preference for, and imposition of, chinese standards that inspires the likes of Amy.  Same thing goes for Hitler and the Nazis.  People are fond of blaming the Germans or Germany for the Holocaust without appreciating that Hitler and the Nazis were just a more blatant example of the empire-building and colonial tendencies of the w.Europeans as a whole; the pseudo-scientific race theories espoused during the time to ‘make sense’ of the differences they encountered, and to justify their varying treatment of the people’s they encountered throughout the world; and also the contribution of the history of European persecution of the Jews to the formation of Hitler's and other's views of the Jews. (the above comprises a part of my undergraduate double-thesis)

all these silly ‘netizens’ ‘flaming’ and berating Amy is just self-serving hypocrisy. That makes Amy Cheong a martyr for the generally racist state of affairs which hangs, draws, and quarters the more vocal form of racists so that socio-political-economic racism can proceed with impunity.Same thing goes in the case of Amy and other racist tendencies of the Chinese.  If the overarching climate can be proven to be racist, or racially supremacist, then Amy et al are simply products of it.  And what is required then, is for the overarching climate to be addressed and rectified as opposed to the people attempting to whitewash their daily sins by this superficial show of inter-racial harmony during more blatant instances such as this.

What i dislike thoroughly about incidents such as this is that the fuss created by people and ‘netizens’ against Amy and other similar miscreants is presented as 'proof' that singapore is an egalitarian state, and that the majority are inter-racially empathetic and appreciative people.  Given the reality of the above examples of racism in singapore, that is nothing short of ludicrous, given that the events mentioned above, amongst numerous other socially-approved forms of racism, and which has a far greater impact on the inspiration and aspiration of the non-Chinese, are swept under the carpet.

Hence, all these silly ‘netizens’ ‘flaming’ and berating Amy is just self-serving hypocrisy.  That makes Amy Cheong a martyr for the generally racist state of affairs which hangs, draws, and quarters the more vocal form of racists so that socio-political-economic racism can proceed with impunity.  Well, to be honest, racism has become so much a part of Xingaporean culture that i do not think that the Chinese do this intentionally.  Rather, it is only the more obvious of racist instances, and those that will have no impact on their pockets and positions if they were to criticise it, that they would stand up against.  I suppose, it would be ‘impractical’ for the interests of the majority to do otherwise.