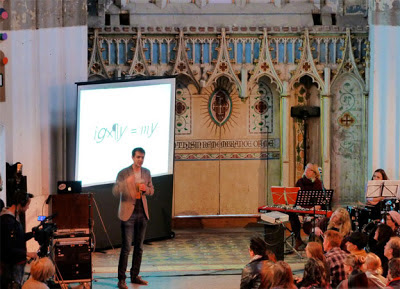 An "atheist church" in North London is proving a big hit with non-believers. Does it feel a bit like a new religion?
Not many sermons include the message that we are all going to die and there is no afterlife.
But the Sunday Assembly is no ordinary church service.
Launched last month, as a gathering for non-believers, it is, in the words of master of ceremonies Sanderson Jones, "part foot-stomping show, part atheist church, all celebration of life".
A congregation of more than 300 crowded into the shell of a deconsecrated church to join the celebration on Sunday morning.
Instead of hymns, the non-faithful get to their feet to sing along to Stevie Wonder and Queen songs.
bbc: what happens at an atheist church

'Atheism' is logically impossible as every living breathing human being is incapable of not having aspirations of some sort, and having an ideal model for emulation.

The heart of religion is belief and aspiration, with variation in Gods, be they supernatural or otherwise.  From traditional Gods and Goddesses, to royalty, sports-stars, actors, musicians, etc, they all comprise a pantheon of Gods occupying the highest echelons of various belief systems, or ‘religions’.  It is ridiculous, and illogical, to define religion by what it was and not what it had turned into as one (traditional) belief system is displaced by another (modern or contemporary one).  When we live in an age of celeb/royalty-worship; when people are being a ‘fan’ of this or that; the claim that we are atheists or should be, is nothing short of ludicrous.  The ‘fan’, ‘groupie’, etc, is not dissimilar to ‘disciple’ or ‘apostle’.

When I associated, for a period of a couple of years, with some ‘black metallists’ a decade ago, they asked me, whilst we were having tea one Sunday, if God existed.  To which, I replied, ‘“Let’s stick to questions that can be logically answered, i.e. Do not ask if God exists, but if it is right to believe in a God, and if so, what sort of God we ought to believe in.”  These comprise the ‘modern congregation’.

The problem with ‘atheism’ is that they are not averse to making ‘Gods’ of wo/men, and thus excuse their deficiencies whilst fixated on their virtues.  This simply leads to a whitewashing of the former which in turn reduces their ability to recognise what is virtuous in the first place.  That is how music, movies, philosophy, language, and the human persona degenerates with the passage of time.  We can worship an actor, whilst looking past their periodic divorces, and thus end up devaluing relationship.  We can worship and give millions to a sports-star, CEO, musician or royalty, whilst turning a blind-eye to how they hoard the wealth required to produce a cure for cancer or HIV within a year, or quash global deaths arising from poverty.  We can worship celebrity-states such as the U.S. of A. whilst rallying around them when they conduct a ‘war on terror’, but think or say next to nothing when they kill close to half a million children via medical embargoes in the middle east.  For the good they produce, we become oblivious to, and internalise their evils.  This is the religion of modern times.

I'd rather believe in 'supernatural' gods as that keeps us considering the ideals they stand for even if it is not represented in the aspirations, attitudes, and behaviour of most people (including myself), rather than taking ideals represented by most people as worthy of worship and emulation because it is the fad of the day.  With the latter, we'd just end up deifying the appetites of the day, with the former, we’d remain free enough to question them and become more than we otherwise would be.