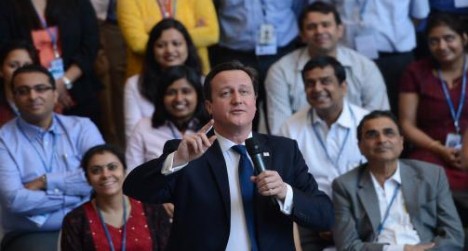 Cameron: UK and India can have 'Great Partnership'

David Cameron has said the UK can forge one of "the great partnerships of the 21st century" with India, as he arrives in Mumbai to begin a three-day visit....

Meanwhile, Mr Cameron has appeared to indicate that the UK's visa process could be made easier for Indian businesses....

"Britain wants to be your partner of choice. We've only just started on the sort of partnership that we could build.

"UK and India can have 'great partnership'", says Cameron.  But what is left unsaid but as an integral part of this statement would be -

“....but since you are not a part of the EU, we'll still have to prefer the migration of white Europeans whatever their profession, to Indians despite their profession.”

Gandhi made a big mistake telling whitey to go home because he was white. If he didn't, it might have averted the formation of the consequentially culturally/racially biased state of the EU.

(the above was placed as a comment beneath the aforelinked article)


With the success of the anti-colonial nationalist movement, the British and Indians were deprived of the opportunity to see themselves part of a wider region despite that region not being ‘white’ or Indian.  There was ethnic/racial/cultural polarisation and sectarianism in the wake of the anti-colonial movement, and thereafter, it also set the foundations upon which Britain, amongst others, could consider the unification of regions, such as the EU, on the basis of a so-called ‘shared history’ and culture.

But I don’t blame Gandhi too much, he didn’t have the benefit of hindsight like we do.  He may have accessed laudable methods to oust the British, but the inevitable consequence was far from laudable.  It is only to those who do not appreciate this point whom might confuse him for a ‘Mahatma’.