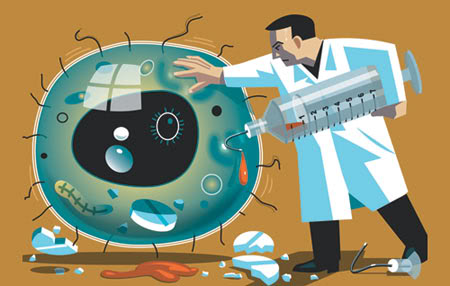 The danger posed by growing resistance to antibiotics should be ranked along with terrorism on a list of threats to the nation, the government's chief medical officer for England has said.

Professor Dame Sally Davies described it as a "ticking time bomb".
She warned that routine operations could become deadly in just 20 years if we lose the ability to fight infection.

Dame Sally urged the government to raise the issue during next month's G8 Summit in London.
Dame Sally said: "If we don't take action, then we may all be back in an almost 19th Century environment where infections kill us as a result of routine operations. We won't be able to do a lot of our cancer treatments or organ transplants."

She said pharmaceutical companies needed to be encouraged to develop new drugs, because the manufacture of antibiotics was not viewed as profitable.
- bbc


I try to stay off antibiotics, flu jabs, and the like by substituting them with a chopped clove of garlic swallowed with a glass of orange juice daily. I have only had a full-blown flu twice ever since i started this regimen 8 years ago. Indian spices like turmeric, or including chillies in the daily diet helps as well.  And now that I’ve been in the UK for a bit, I’ve discovered another wonderland of western/Italian herbs.

I was speaking to an English woman a month ago about the benefits of fusing indian spices with western herbs a while back and she joked, derisively I thought, ‘so I suppose you will be able to live till a 150 years old then’.  She, unlike some others I’ve met, was a bit of defensive of all things British.  I’ve never taken kindly to such nationalist pride wherever it rears its childish and blinkered head, so that didn’t deter me.  The point isn’t that I’m going to come up with the best of health and vitality-endowing recipes, but that if others thought similar to myself, than they would be able to add their own ‘fusion’ ideas and thus enrich mine even further, and as a result we could come up with even richer ideas, or a whole array of recipes that are great for the health, and different as well.

Perhaps antibiotics is a means by which people try to get around their aversion to difference as it enables them to continue with their traditional and familiar recipes and perspectives without ‘foreign’ input. ~ ed


I often thought that solutions lie in cultural fusion. Xenophobes, and those silly people who have too much of this 'cultural pride' thing will tend to deprive themselves of the best of all worlds and solutions to much of that which they bemoan. I'm not averse to including turmeric in my Sunday (chicken) Roast; western herbs, orange juice, and extra virgin olive oil to my curries; or indian and western spices to my pasta.

Perhaps antibiotics is a means by which people try to get around their aversion to difference as it enables them to continue with their traditional and familiar recipes and perspectives without ‘foreign’ input.  In that sense, the growing resistance to antibiotics might force people to pay heed to non-traditional ingredients so that the home-larder might eventually replace those grossly profiteering pharmaceutical companies.