In Praise of the 'Nazi Salute' 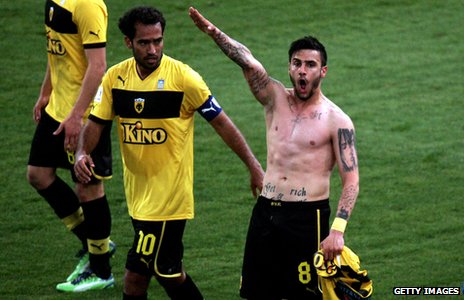 A 20-year-old Greek footballer has been banned for life from playing for his national team after a controversial goal celebration in which he appeared to give a Nazi salute. The player says he hadn't understood the meaning of the gesture - but is it possible, in 2013, for a European to be so poorly informed?

On Saturday, Giorgos Katidis gestured with his right arm extended and hand straightened, to celebrate scoring the winning goal for his team AEK Athens in a Super League game at the Olympic Stadium in Athens.

After the match, the former captain of the Greek under-19 team turned to Twitter to explain his actions.

"I am not a fascist and I would not have done it if I had known what it means," he wrote.
His team's German coach also said his player was ignorant of what the salute signified.
"He is a young kid who does not have any political ideas. He most likely saw such a salute on the internet or somewhere else and did it, without knowing what it means," he said.
- bbc


So some Greek ballkicker has been banned for life for making a 'Nazi salute'.

The BBC is asking how people can be so poorly informed because this bloke claims that he does not know the 'meaning' of this salute. Yes, the BBC is right. How can people be so poorly informed. Poorly informed of the other possible meanings of this salute or gesture,  and the underlying feelings that can be expressed with this or other gestures, but which does not necessarily mean that one has a picture of Adolf in place of the wife, kids and dog in the wallet. 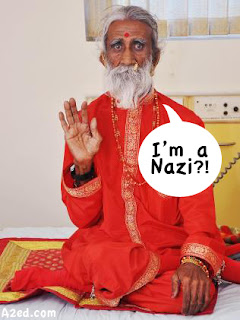 How is that a 'Nazi Salute'? The Nazis may have popularised it, but its meaning is actually quite varied. I recall myself and a group of guys frequently giving each other that 'salute' whenever we met each other a couple of decades ago. To us, it meant camaraderie, commitment, anti-establishment, etc.  In the face of great truths, or really great people like Malcolm X, Martin Luther King, the Buddha, Jesus, Karl Marx, and other humanitarians, we would also make such a 'salute' of acknowledgement and respect. We weren't 'Nazis' - and none of us were 'white' either.

This is similar to the term 'gay'. Homosexuals of both genders decide to term themselves 'gay', and a word that actually meant 'happy' was monopolised by them and moved on to mean nothing besides. Ridiculous. I don't see why the meaning of things has to be monopolised by the western, or any other cultural, perceptions of things.

One could say that vilifying those who make such a salute, if they aren’t Nazis, is pretty much Eurocentric and Jewcentric.  In other words, a gesture given meaning according to European perceptions, and said perceptions being linked to genocide against the Jews in the 2nd World War.  The more this salute is linked to the Nazis, the more the world itself is taught to make sense of reality through western eyes.  Talk about cultural fascism.


If one was to really think about it.  I mean, really think about it, the reason why the west might be raise its hackles in the sight of this salute is not only because they are pretty egalitarian-minded, but because the vilification of this salute frees them from complicity in crimes against the Jews.  You see, the ‘Nazi Salute’ is linked to the Germans, German, and the 2nd World War, and German racial supremacism, and slaughter of the Jews.  It is not linked to European history, Europeans as a whole, and so on.

But the fact is, w.European history, and not specifically German history, is fraught with genocidal killings or persecution of the Jews.  So to absolve itself of complicity in the production of Hitler and the Nazis, w.Europeans symbolically cast their sins into this symbol of allegedly ‘Nazi’ and ‘German’ origins, and this way, disclaim responsibility in the genocide against the Jews.  It is like the biblical goat upon which is cast the sins of the people, and then is dispatched into the wilderness (The Book of Leviticus, Chapter 16, verse 21-22. See below),  or like how some barbaric societies, from the U.S. A. to Singapore, might execute the more diseased by-products of its vaunted cultures so as to free itself of blame from its production.  Same thing goes here with the vilification of the so-called ‘Nazi Salute’.

22 And the goat shall bear upon him all their iniquities unto a land not inhabited: and he shall let go the goat in the wilderness. 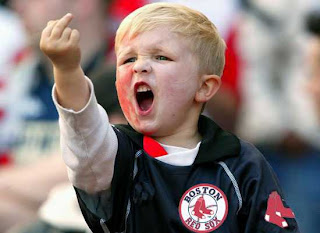 On another note, the ‘Nazi Salute’ is something which tyrants both fear and love.  On the one hand, it denotes an ideological progression and fruition of the centre-finger.  In other words, it means people are moving from hating something (giving something the centre-finger) to realising that they are all in the same boat and ganging up together with a salute of collective unity, resolution, aspiration, and determination. Keeping the people in the 'centre-finger' stage of maturity only enables the maturation of the agenda of the elite.

The up-pointing hand, steadfast, unmoving, points towards a location ahead of yourself, skywards.  The eyes, looking in the same direction, upwards, is like someone who is dreaming and disengaged from the way things are, and yet is resolute about it.  Tyrants love it when this hand and sight is aimed at them with adoration.  But they also know that a people who can feel such things, whom are passionate, can also turn against them with equal vigour.  Hence, the vilification of this salute as ‘Nazi’ is necessary to get rid of such collective and resolute passion amongst the people.  They’ve learnt that the passions underlying this salute could be turned against the elite of other states, as witnessed in the 2nd World War, or even themselves.


With the increasing globalisation of the planet since colonial times, and the elite reaching across borders to form international unions of exploitation of the global peasantry, Hitler and the Nazis stoked enough passion amongst the people and turned it against them.  He wanted it all for the German elite.  So the movement against Hitler and the Nazis was, besides other things, a movement against an elitist who didn’t want to share the exploitation of the people with the international elite.

Same thing goes with the so-called American ‘War of Independence’ against the British.  Same thing goes with the English forming their own so-called ‘Church of England’ and breaking away from the Roman Catholic Church.  They were all just warring against elites who wanted to keep the spoils of exploitation for themselves.  They wanted to feed at the trough themselves.

So mass apathy is to be preferred.  The hallowed ‘Centre-fingered’ gesture should never move on to ossifying into a salute of collective ambition.  So if the people just confined themselves to centre-fingering some reckless or self-centred driver on the roads, or a bloke who refused to buy his round of drinks, or Steve Jobs or Bill Gates, or even themselves, that’s fine, so long as  it does not move on to the masses forming a collective consciousness of itself as a class apart from the elite, which is a ‘Nazi Salute’ in collective unity and passion, if not in ambition.

In Praise of the ‘Nazi Salute’

One could even say that where there is no collective group with great and laudable aspirations and strength about, people whom still desire a collective sense of belonging will just be drawn to these neo-Nazi groups because there are no other strong collective and egalitarian groups about.  For instance, many sporting the same ‘skinhead’ hairstyles, dressing similarly, is, aesthetically, more appealing to the those desiring to experience a strong sense of community and collective aspiration.  Whilst I am a socialist, I cannot but help admire the visual show of strength by neo-Nazis be it in their macho tattoos, their dress, their vigour, and their jackboots.

Whilst I absolutely love difference, multiculturalism, and curry on crumpets, I’ve often felt that there is a need for a more aesthetic show of unity and strength amongst socialist other than a collective profession of faith by the congregation of socialists on May Day at Trafalgar.  I suppose if socialists began to don similar clean-cut outfits like that worn by the Gestapo or SS, and threw out ‘Nazi Salutes’, or at least did their clenched-fisted salutes more often, whilst professing their desire for social equality, they would have drawn much of those who signed up with the BNP to the UKIP.

But looking at how socialism has as many, or more denominations than Christianity, and looking at the constant squabbles amongst themselves, it is no wonder that those whom are inclined toward instant gratification sign up with the neo-Nazis, Chinese Triads, street gangs, and their other variants across the globe.  These, signal, not the failure of fascism, but the modern variant of its success.