of MacDonald's and Horses's Asses 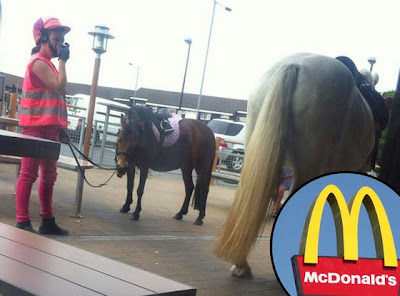 A woman has been fined for taking her horse into a McDonald's restaurant in Greater Manchester.
Police said the woman, who has not been named, was in the saddle when she was initially turned away from the drive-through kiosk on Bury New Road.
The woman then led the animal inside, where it "ended up doing his business on the floor", a Greater Manchester Police (GMP) spokesman said.

"The incident caused distress to customers and disruption for the restaurant, and the police issued the woman with a fixed penalty notice."

She added: "The health and safety of our customers and staff is our top priority, and for this reason we are unable to serve pedestrians, bicycle riders or customers on horseback through the drive-thru." - bbc

Why should MacDonald’s view a horse in a drive-through as compromising ‘health and safety’ as opposed to a car.  I dare say that a horse’s ass presents less of a hazard than the exhaust pipe of a car.


And anyway, I don't know what the fuss is about, it's not like there is much difference between a horse's ass and McDonalds.