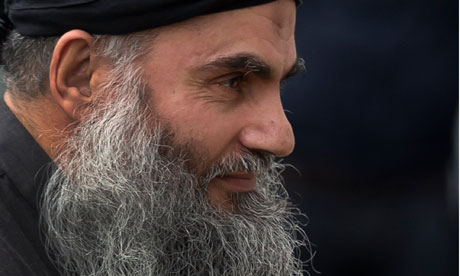 Radical cleric Abu Qatada is being held in a high security jail near the Jordanian capital Amman, after being deported from the UK.

His plane left RAF Northolt at 02:46 BST for his home country, where he appeared in court to be charged with terror offences, which he denies.

Prime Minister David Cameron said he was "delighted" at his removal.

Abu Qatada was first arrested in the UK over alleged terror connections in 2001 and has fought deportation since 2005.

I don't get this 'terrorism' thing. Wasn't it an 'act of terror' when u.s. sponsored embargoes killed close to half a million children in Iraq? Is the colonial, 'we are white ergo right' still going on? Going by many comments here, it seems to be the case.

The best way to get rid of terrorism is to not incite it with terrorism. I don't understand how people can kill people and call them terrorists when they retaliate. Gross self-absorption and arrogance perhaps. Most times, terrorism begats terrorism. The only time we can call anyone a terrorist is when we never killed anyone on the other side.

Personally, i really dislike the views of this bloke Abu Qatada. He lacks the same objectivity that is absent amongst quite a few on the side he opposes. I do not believe in having an Islamic or any other state based solely on one religious viewpoint. I view all faiths as part of a puzzle that is only going to make sense when pieced together.

The point is, every effort to deport individuals such as this, in effect, is simultaneously an effort to rid from our sights what might actually be products of our own self-centred endeavours. Hence, it just serves to exonerate our complicity in this whole scheme of things and enables us to continue along our erroneous path. Violence isn't my cup of Darjeeling, and hence, i recognise it as an evil whether it comes from a turburned individual or a bareheaded one.

To both sides, stop it. To many eurocentric commentators here, do some serious and unbiased thinking, and try a little bit of empathy. Didn't you go to war for far less? History is my witness.

When we, in the present, look at the past and dismiss it as backward, we are simultaneously viewing ourselves as progressive.  What people fail to realise is that the backwardness of the past is based on people in the past thinking the same as the people in the present.  People fail to realise that the present, many a time, is not break from the past, but a continuation of it.  When we appreciate that point, we might look sceptically upon that which we hold to be true.    The colonial perspective as ‘white=superior’ and non-white=inferior continues in the present and hence gives birth to the idea of terrorism.  This same perspective afflicted the colonialists in the past who shot those who dared to oppose them for shooting at them.  I have studied this perspective in its application in the west from Greek times more than 2000 years ago, through to colonialism in the ‘pre-modern’ era, and hence recognised it immediately when it reared its ugly head in this ‘terrorism’ situation. 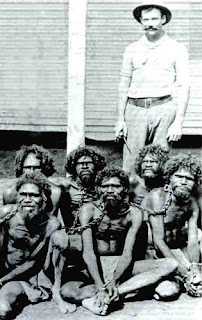 I looked at how blacks were considered as animals because of their near nudity from Africa to Australia.  I read about how whites bashed the heads of black children against rocks, or used them for target practice after tying them to trees.  I read how they beheaded black husbands and made their wives wear them around their necks.  I read about the racist perspectives of their so-called respected leaders, from Lincoln to Churchill about the uncivilised nature of the blacks and others, the laws they passed to maintain their ascendance over them.  I read about how children were taken from their ‘savage’ parents so that they might be ‘reared white’ in character if not in colour.  I read about the perspectives of their numerous pseudo-scientific race theorists who sought to ‘scientifically’ explain the inferiority of everyone else whilst using the ‘civilisation’ and mutual exploitation of ‘white’ civilisation as a standard for measuring civility in all others.

And I read about how the general policy was ‘assimilation or extermination’, and that resistance  by people was taken as evidence of savagery and hence justification for their being killed.  And then I looked to the present and saw how they killed close to half a million children in Iraq so that they could have things their way in the middle-east, and then called them ‘terrorists’ when they retaliated.  And I realised that the colonial mentality was still well and thriving.

When the colonised retaliated against western colonialists from the Americas to Australia, they called them 'savages', instead of 'terrorist'.  Now the term 'savage' is seen as a racist term, so they use the word 'terrorist' to pursue similar racist policies.


I had thought that the whites had matured and realised the error of their ways with their relatively greater empathy and civility.  But then I realised that this was only the case because didn’t have to suffer retaliation for what they had and have done.  All these decades they had done as they willed whilst their shores were kept safe.  But the real test is when they suffer retaliation for what they have done or do.  It is in their reaction that we will see whether they have matured from their savage ways during the colonial period, or just deem those who retaliate as ‘savages’, or in ‘modern’ terms, ‘terrorists’.  Of course they can’t call them ‘savages’ as that would only serve to reveal that they are using the same terms as they did in colonial times.  That would only lead people to wonder if they are using the same racist perspectives as they once did.  Hence, the term ‘terrorism’.  And with such a word, to even talk about what causes it is seen to be an effort to ‘justify’ it.  This way, everyone begans to shut up and not talk about cause and effect and just view them as devils whom are just plain evil.

postscript:   I am not encouraging hatred of ‘whites‘ here.  Frankly, many amongst them do hold greatly empathetic views and sentiments and I truly appreciate them for it, and even more so than many of the asians I’ve associated with and whom are supposed to be ‘my own people’.  And many do oppose present-day colonialism and the vilification of those who resist the western elite’s agenda.     It’s just that with 11/9 and 7/7 bombings, many lost their objectivity and unwittingly took on the perspectives of the colonialists by viewing those who retaliated as evil without appreciating the historical evidence that pointed to them as its progenitors.

Assimilation or extermination became the trendy perspective yet again.  Many did speak out against the west initiating the Afghan and Iraq war as well and said that this would incite retaliation.  I don’t know why this even had to be said.  It’s commonsense I thought.  You slap someone, they are going to slap you back.  It seems that the idea of retaliation is quite distant in the minds of the westerner who has been trained to think that they can do as they will elsewhere and not have to face retaliation for it.  That is why the idea of ‘terrorism’ gained currency as it relegated all retaliation against the west as unadulterated ‘evil’ that requires no causal analysis.  When the colonised retaliated against western colonialists from the Americas to Australia, they called them 'savages', instead of 'terrorist'.  Now the term 'savage' is seen as a racist term, so they use the word 'terrorist' to pursue similar racist policies.

‘Terrorism’? Let s/he who is without sin accuse the other of casting the first stone. Amen.

It was then that I began to realise that many in the west had spoken out against colonial racism of the past simply because they didn’t have to suffer negative consequences for it.  It made me realise that, during the times of anti-colonial and anti-racist movements in India or Africa, if the Africans and Indians had retaliated against the British in the UK itself, they would have been deemed to be ‘terrorists‘, the British would have forgotten that they had started first, and would have conducted a ‘war on terror‘ against them.  It was like, ‘we are willing to acknowledge our sins so long as we don’t have to pay a price for it at your hands.  If we do, then you are the sinner.’  That is when their empathy began to strike me as a tad bit hypocritical.

This perspective is not written to incite hatred of the whites, but for the whites to engage in some critical introspection so that the erroneous perspectives of the past does not become the trends of thought in the present.  (the author - ed - was given an ‘upper second’ for this, amongst other related analyses, in a self-titled and independently researched dissertation, ‘Racism in the Colonial Context’ - a study of assimilation or extermination.  The study was concluded in 1999 and did not include the idea of ‘terrorism’.  Documentary evidence from news reports, political statements, historical events in the west/americas/africa/s.e.Asia/Australasia, philosophy, religion, etc, spanning 2000 years, was studied.)


“I'm not supporting terrorism whatever its origins or grievance.”   I don’t know why we live in a climate where we need to add such a disclaimer.  In the analysis of cause and effect, we are actually seeking to address an evil, not support it.


‘Terrorism’? Let s/he who is without sin accuse the other of casting the first stone. Amen.