How to immunise your kid against cyber-bullying 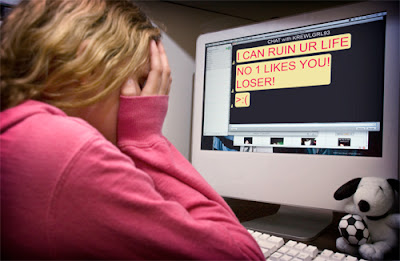 One in 5 Children bullied online

Almost one in five children who use social networking sites suffered a negative experience last year, research by children's charity the NSPCC shows....  The NSPCC also said a "large number" of users of Facebook, Twitter and YouTube were under the minimum age of 13.

A full report of the survey of 1,024 11 to 16-year-olds from across the UK will be published in November.

The survey also showed that the most common bad experiences among children were bullying and trolling.

This involves insulting or intimidating others, usually under a pseudonym, to provoke a reaction....   Earlier this month, 14-year-old Hannah Smith, from Leicestershire, was found hanged. Her father said she had been sent abusive messages on social networking site, ask.fm.

Claire Lilley, NSPCC safer technology expert, said: "It's unbearable to think any young person should feel there is no other option but to end their life because of bullying on social networking sites."
- bbc


It is a silly and tragically comical situation. The young uns' are placing more importance on their peers today than they did in the past because they are able to get together with more of them via the net.  The power of the influence of neighbourhood kids is far less than the power of the influence of kids from neighbourhoods throughout the world.  As a result, teens are validated for what they are as opposed to aspiring to be more than is the trend amongst their juvenile peers - with significant and unfortunate input from their arrogant and ignorant peers from the Juvenile State of America.   Hence, teens tend to be less exposed to, tolerant of, and appreciative of alternative views, elders, and just about anyone else outside of their globally interconnected circle.   They, and their own juvenile groups online are the know-it-alls because they are greater in number.

When it comes to bullying, as a result, they will also tend to get more affected by the opinions of their online peers as there are none other that they have been taught to consider.  You could say that the more connected one is to one's peers, the more disconnected they are from alternative conceptions of one's self.

Hence, the impact of bullying by peers is greater because when an attack is made on their character, they have no alternative identities or self-conceptions garnered from other sources to soften the blow.  They aren’t able to say, “well, you think I’m an idiot, but my older friends and relatives appreciate me for my creativity, or intelligence, or potentials”.  The bullied teen can’t say, ‘I am more than you have the intelligence to appreciate‘ because they do no appreciate the views and perspectives on anyone other than their circles.

For myself, i never ever gave a toss about the opinion of bullying or 'trolling' peers as there was no internet back then to make the views emerging therefrom comprise the entirety of the structure of my self-conception.  Hence, i learnt to appreciate the perspectives of my elders, and people of various walks of life and various ages, faiths, styles, et cetera - singapore back then, thankfully, was not the monocultural sino-fascist state it is now.  Hence, i could just discount the views of my peers as just one view, or plain rubbish.

Parents ought to consider this and compensate for the young's time on the net by ensuring that they are exposed to, and appreciate views other than the trendy ones by similarly shallow youngsters.  Exposure has to range not only from interaction but from media exposure.

Ageist ‘comedies’, films, ads, should be filtered out.  This should also include media productions that constantly present youngsters as heroes and older people as relatively stupid.  Shows that pit ‘trendy’ people against ‘nerds’ and ‘geeks’ should be excluded as well.

I would personally recommend films and series from the 70s as they have greater intellectual content, and present ideas as a result of discussion and analysis, and that downplays the ‘wisdom’ of youngsters.  The point is to promote thought as opposed to reflexive reaction; to instill an appreciation of different views; to encourage the consideration of perspectives from all ages and groups of people; and to generally use these to rear the child and teen to appreciate that one’s sense of self ought not to be subject to the sole, and hence, tyrannical, dictates of one’s peer group.  It is in this that the impact of verbal bullying by peers is done away with.