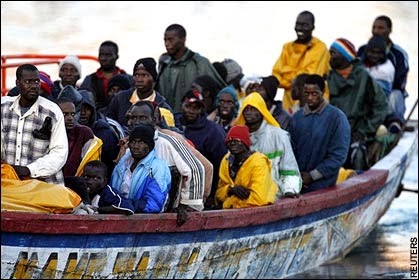 Living in the UK to get tougher for illegal immigrants

Home Secretary Theresa May says illegal immigrants will find it much harder to settle in UK under planned new laws.
The Immigration Bill would force private landlords to quiz tenants about their immigration status and restrict access to bank accounts for people in the UK illegally.
- bbc


Yes, it is ultimately about racism.  The concept of the EU makes the bulk of potential 'illegal' immigrants non-whites, and therefore, by association, white becomes acceptable, and non-white, not.

For people to accept this without realising or questioning it shows the degree to which racism is entrenched.  If this is not the case, people would immediately wonder why people of Europe should be preferred over, for instance, people of Africa or India, amongst others, who contributed far more to the well-being of the people of colonising countries.  Why isn’t the relationship between the British coloniser and colonised considered 'shared history' as opposed to defining it solely on, amongst others, the British ‘royal‘ family being related to the rest of European aristocracy, or people intermingling over the centuries.  This just indicates the degree to which the avowed non-racist British, for instance, might actually be subconsciously viewing the exploited colonised countries of the past as nothing other than fodder.  If not, they would have taken issue with the exclusive idea of the EU on this basis with as much vociferousness as they did and do for other reasons.

Yes, it is ultimately about racism.  The concept of the EU makes the bulk of potential 'illegal' immigrants non-whites, and therefore, by association, white becomes acceptable, and non-white, not.

With the white-favouring EU, the parties in power have immediately incorporated all those whom are simply against illegal immigrants into racism since one’s stance would, unwittingly, be against non-whites - because the EU turns whites into legal immigrants.  This just puts them one step behind racists and thus, they may more easily fall prey to their perspectives since the divide between either becomes more tenuous.

And the idea of 'terrorism' just adds fuel to such an impetus as the result of western policies come-a-blasting on their door as there is no Charles Martell to answer it as the 'enemy' of non-western origins is already within.  So, this closing of the doors enables the west to do as they will in the non-western world without fear of local repercussions as well.  For instance, I have asked some, 'if there were lots of Indians in the UK during the time of British colonialism, do you think there would be as many massacres in India, or death by British-caused famines?  Or do you think that if there were, they would have been labelled terrorists?'  Sometimes, methinks, during the ad-breaks on the telly, that if we let in people from more regions into our country, the more we would be inclined to act responsibly in those regions, and thus reduce the incidence of 'terror'.  Or we could just childishly refuse to do so and just label them 'terrorists'.

Over the future decades and centuries, if this nonsense were to continue, whatever achievements of the west and Europe would be seen as a ‘white achievement simply because the non-whites were institutionally left out, or only given temporary permits to come in to compensate for the shortfall of brains amongst them. (i had the sociological privilege of observing this process in singapore over a couple of decades as the chinese-controlled government kept out and down the non-chinese so that the achievements of the state could be credited to the chinese.)

To enable talk against illegal immigration to remain non-racist, the overarching arena has to be non-discriminatory.