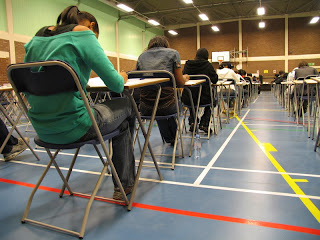 Exams regulator Ofqual has confirmed the changes it is making to GCSEs, in what it calls the biggest shake-up of exams in England for a generation.
A new grading system will use numbers instead of letters and coursework is being scrapped for most subjects.
- bbc


ed: Memory over analysis, research and working together on intellectual and creative tasks?

Right, that's what it takes to vote in wrong governments all the time.....and play Angry Birds.

Habibah Amin: This is actually very annoying. Every bloody term we have news Michael Gove's doing something different. Please Mr. Gove, go and get some experience teaching or go try and focus into the mindset of someone my age!

At the end of the day it is NOT fair on the people of my age and younger. I would do a better job than Michael Gove for sure. He claims he wants "...the best for the youth of today...", yet - he's making it worse! If you look back on the strike that happened a few weeks ago, it affected teachers, parents, the parents work places. EVERYONE IS BEING AFFECTED.

Why not just get rid of Gove and get if you like, get 'student education ministers'? Have a vote on the debate and decisions the government want to propose. At least it would be thought through properly and fairly!


Ed: That’s like saying that a person who’s just learning to swim should determine what should be taught.

I wouldn't want 'student education ministers' until we have some control over the pop and consumer culture that determines how kids and students think, or don't think, about lots of things.

Or else, we might see One Direction, Justin Bieber or Lady Gaga being proposed as ambassadors or being nominated for knighthoods, and vocabulary being contracted to include not really much more that 'whatever' 'awesome', 'cool', 'weird', 'totally', 'so so', 'omg' and 'lol'.

We cannot expect - especially these days when parents have handed over intellectual and creative parenting to Apple, Angry Birds, and the elite and corporate-controlled media - for all kids and teens to be as smart as Habibah unfortunately.

That said, i do admire your spirit Habibah. Keep it up! Too bad my peers in my earlier schooling days weren't as smart and tough as you.


The difference between exams and coursework, i'd say, is that the former tests you on how much you can remember about something you understand and remember in theory, vs, something you appreciate in practice.

With the latter, i can also get to appreciate that which might have been left out in theory and perhaps advance the subject as opposed to just regurgitating it.

Annabel Cowdrey: Gove knows as much about teaching as I do about astrophysics. I've long said that the Education Secretary should be a Headteacher with a minimum of 30 years' teaching (just as the Home Secretary should have frontline experience of Policing). Stop letting Gove play around with our children's futures!

Ed: A headteacher with 'a minimum of 30 years experience' can also be one who is stuck in tradition as opposed to new ideas unfortunately.

Let's face it. 'Adults' can be defined as people whom having found one way that works, stick to it, and do not oftentimes consider if there is a better way.

Ed: I never experienced coursework till i went to uni in England.

The difference between exams and coursework, i'd say, is that the former tests you on how much you can remember about something you understand and remember in theory, vs, something you appreciate in practice.

With the latter, i can also get to appreciate that which might have been left out in theory and perhaps advance the subject as opposed to just regurgitating it.