D-Day, In discussion: When Nazis clashed with each other 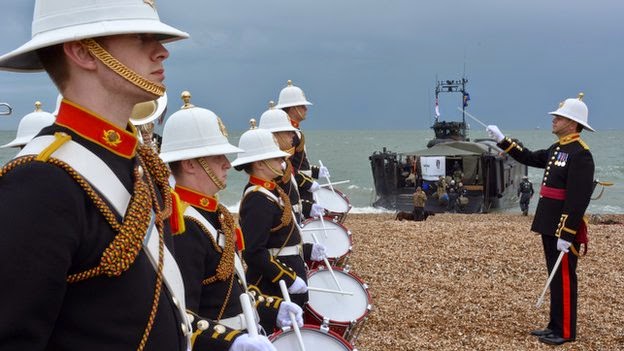 French President Francois Hollande has led the D-Day 70th anniversary tributes by remembering those who died on a day that "changed the world".


He attended a service near Bayeux with US President Barack Obama, who said the US commitment to liberty was "written in blood" on French beaches. The Queen laid a wreath at a ceremony nearby.
They will gather at Sword Beach, one of five landing points for Allied troops.

The landings were the first stage of the invasion of Nazi-occupied Europe. - bbc


Ed: Ww2 was just infighting amongst western racists and fascists with megalomaniacal ambitions.


George C. Brunner: Edwin: you should be thanking those who died so you can spout your nonsense.


Ed: No thank you mate. The indians already had freedom of speech long before Christ was born. Don't you know about your own neo-Nazi history?  I could already spout 'my nonsense' long before the pillaging white men reached the shores of India.


Martyn Van der Voort: So you were even spouting before Alexander The Great over 300 years BC. Are you a timelord? Or just a student with no clue?

Ed: I'm talking about the Indian people Martyn. Too thick too understand i see, especially if you feel the need to refer to Dr Who.


Adrian Theobald: You hate the white man yet you happily live in our country don't you? Hypocrite.


Ed: Your country? You're joking right. Your country was built on the blood, sweat, and tears of millions of Indians, Chinese, Africans, etc.

You can go about all pretentious and holier-than-thou simply because you outsourced suffering and much labour to others in chains.

Have some remorse and shame will you. Or at least, start with a proper education. There is more to be known than can be found at the bottom of a pint or pudding you know.

Anyway, i don't hate the white man. I'm just pointing out self-serving deficiencies in their worldvision that has untoward consequences to the present.

I'm remembering how Indians were being treated as 2nd class citizens in India whilst those you are remembering were maintaining such conditions.

I'm remembering the natives of america who were being treated as such in the US.

I'm remembering that the blacks there were being treated as such as well and were segregated and called 'niggers'.

I'm remembering how children were kidnapped from their aboriginal parents in Australia so that they could 'be reared white' by those you are remembering.

So all this, 'heroism' of the west against racism and fascism is a whole load of Marvel-style west-as-the-superhero crap. Both world wars were started by the west, and the rest of the world were dragged into it as fodder for their canons.  In their fight against the Nazis, they were fighting against an evil that was a more blatant manifestation of themselves.  In other words, they were clearing up part of an evil which they themselves had given birth to.  In effect, they were all Nazis flying different banners and having different approaches in appreciation of a common ethos.