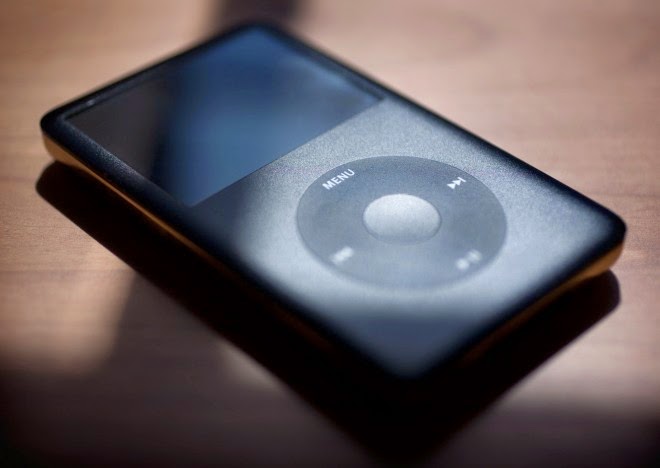 I don’t know what’s wrong with people these days.  Am I the last of the cogitating individuals on the planet, I sometimes wonder.  No.  When corporations engage in piratical activities, I blame the people.  What message are the people sending these corporations that is enabling them to do as they do unto them?  That’s the problem with consumers*, as opposed to human beings.

But it kind of makes sense doesn’t it.  More and more people are buying music from Apple’s iTunes store, which sells music at very low quality**, the highest being 256kbps (KiloBits Per Second).  So that doesn’t take up much space in your iPod.  So why give you so much space for less money compared to the proportionately higher priced iPod Touch?  At least, if they reduced the price of the Touch to match the Classic in terms of price per gigabyte, I wouldn’t mind it so much.  But they aren’t.  Just like when they took the optical drive away from the iMac but charged you the same price for it, whilst making more money by selling you ‘Cloud’ space.

For myself, I like the iPod Classic for the simple reason that it has lots of space.  I am in the midst of ‘ripping’ my vinyl record collection into a digital higher-than-CD quality format for playback via my stereo and iPod.  But once my iPod conks out, I’m stuck with the iPod Touch that isn’t going to hold much of my digitised record collection.

And the best way to perpetuate this is to accustom the young to nothing more than memories of the present rather than the appreciation of a relatively more fair past.

Parents, these days, are just midwives delivering a consumer to the corporation..


But that’s the thing about technology when led by profiteering pirates isn’t it.  The logic is simple, profit margins can best be increased by giving the people lesser and lesser for more and more.  And the only way to do that is to make the people lesser and lesser to the point that they view little as good enough.  And the most effective way is to accustom the young to nothing more than memories of the present rather than the appreciation of a relatively more fair past.  You might theoretically be able to do more with technology.  But the kind of technology that is produced is actually geared toward consumption of whatever the corporation spews out instead of what you can produce with it, or experience to the fullest.  Like tablets, it is mainly a consumption device.  You can’t do much with it in terms of production as you could with a desktop.  And with the discontinuation of the iPod Classic, you are going to experience more music but at a lower quality.  If people were really connoisseurs of music and quality, and are as so in many other meaningful ventures, this wouldn’t happen.  But, as I’ve said often, but never enough, society degenerates with the perspectival reduction of the young by the corporation.  Parents, these days, are just midwives delivering a consumer to the corporation.

People might say, “hey ed, it’s just the iPod, what’s the big deal?”  What such people don’t get is that with every experience that is unjust, and which we engage in without even baulking because it is increasingly and widely fetishized, we are being more and more trained to lose our sense of justice.  Such a compromised sense affects every aspect of our lives from the seemingly innocuous to life and death issues.  It’s about time we nationalised Apple, amongst a host of others.


* We are certainly living in a Consumer Age, one of the gifts of western ‘civilisation’.  I don’t think much of western democracy these days.  It just seems to pave the way for the global dissemination of identities that reduces people to the point of making democracy nothing more than the right to consume the latest this-and-thats and be whatever the corporations, celebs, and elite, want you to be.  Not surprising, as the west doesn’t have much spirituality in their constitution, and hence, produce technobots in place of people.)


** In case you’re wondering what that is, let me put it this way.  A CD holds music that is 1411kbps in quality.  All this kilobits represent audio information.  That is the quality of the sound that you hear.  Even in the simple sound produced by the tinkle of a triangle, there is tonal variation, graduation, variation in depth, etc.  When you hear the whole variation, it gives more pleasure than, say, hearing the dull thud of a rusty bicycle bell.  So with 256kbps, you are getting more of the latter than the former.  It's something like the difference between DVD and HD, for the ears.  The richness of the musical experience is reduced - not that there is much richness in much western pop music these days anyway, in terms of complexity, intricacy, depth, or anything.  Bubblegum music, that’s what it is.