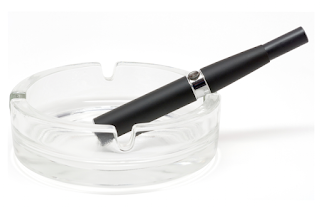 E-cigarettes are 95% less harmful than tobacco and could be prescribed on the NHS in future to help smokers quit, a review of their use has concluded.

Experts who have compiled a report for Public Health England say "vaping" could be a "game changer" for persuading people to quit cigarettes.

They also say there is no evidence they give children a "gateway" into smoking.
Some health campaigners have welcomed the findings, but the British Medical Association has expressed caution.

The Welsh government has previously announced that it plans to ban the use of e-cigarettes in enclosed spaces.

E-cigarettes are increasingly popular and are now used by 2.6 million adults in Britain.
But public health experts have been divided over whether they should be seen as a much safer alternative to smoking, or a pathway to a deadly addiction.

Public Health England asked a team of experts to examine the emerging evidence.
Their findings are unequivocal. On the question of safety, they conclude - as a broad estimate - that e-cigarettes are "around 95% less harmful" than smoking. - BBC

The people have been so dumbed down by their government that they can't see what a wicked government they have.  The late LKY’s greatest achievement was to narrow the people’s personality, so as to narrow their focus, onto the basically practical, and define development from a purely economic point of view.   Development beyond the practical, in terms of the multicultural, creative, spiritual, empathetic, was left out.

Just one factor alone, the banning of e-cigarettes in favour of cigarettes is bad enough. The greed for 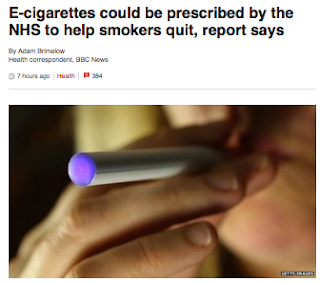 profits from cigarette sales, and the ensuing medical expenses and profits that will be accrued via people suffering from smoke-related illnesses must have been quite a lip-smacking alternative to bothering about the health of the population. But, as i've learnt through trials and tribulation, there is no reasoning with the chinese.  They are a rule and tradition-abiding people.  Normative thinking, in line with traditional chinese thought going back more than 2000 years, is not supposed to be a function of the human mind - which might explain why a doctor exclaimed a couple of years ago, upon seeing my brain scan, ‘oh! Your brain is very developed!’....perhaps he was just comparing it to the other singaporeans who came in for brain scans.   Anyway......

Oh yes, singapore is certainly much more advanced than the UK in many respects, but when it comes to simple humanity at a collective level, they leave too much to be desired.


As for the 'danger' of e-cigs, it is far more harmful to walk by the road and breathe in all those fumes than it is to puff of an ecig. No wonder why the National Health Service in the UK is considering recommending it as a smoking-cessation device to smokers.  I suppose since the NHS is a non-profit organisation that has to foot the cost of medical expenses for the people, they would certainly be open to different ways to bring down medical costs incurred through treating smoke-related illnesses.

Not so the case in singapore where medical treatment is a huge-profit industry, and where many a doctor would jump at the chance of prescribing pills instead of suggesting lifestyle changes prior to flogging off pills.    I've already had two die recently in my extended Chinese family from smoke-related illnesses, and it pains me to know that that might not have been the case if ecigs weren't banned.

And it is ridiculous to think that people who start off on ecigs would move on to cigarettes.  Saying that people who start with ecigs will move on to cigs is like saying people who start drinking Coke would move on to alcohol.  Ecigs and cigarettes are very different experiences.  The former is pleasant with its range of sweet and menthol flavours and doesn't leave you with a congested chest, bad stamina, phlegm, or any other symptom that comes with smoking ecigs.  If lots of people can give up smoking by picking up ecigs, why would people give up ecigs and move to cigarettes?  In fact, people who move from cigarettes to ecigs, after a while, will find smoking repulsive.  So the argument that it is a gateway for teens to move from ecigs to cigs is ridiculous.

Singapore is pretty polluted.  If it's not the periodic 'haze' from forest fires in Indonesia, during the Chinese ‘Ghost Month’, the country becomes a smoke-filled zone.  It is not uncommon to see a metal barrel with lots of offerings being burnt to chinese ancestors whilst people at a nearby open-air coffeeshop that is fogged up by the smoke but where smoking is banned, having to go out of the immediate vicinity to have a smoke.  And one can see many chinese singaporeans jogging by the roadside, or cycling in the full glory of their overpriced outfits and bicycles. Health conscious? Well, you're basically breathing in all those fumes at a faster rate.

You'd be better off, healthwise, staying home with the windows closed and smoke e-cigs.  But that’s not going to happen till commonsense reigns in that sad little state of affairs.

Ah well, time for an Indo-coffee and an ecig. 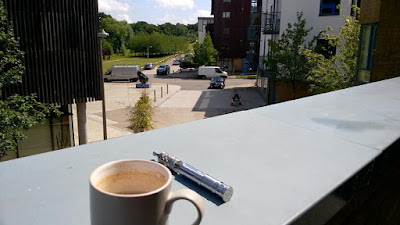