Trump, the true face of America 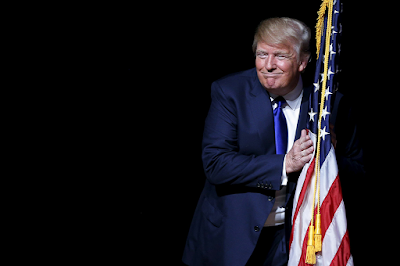 In a way, Trump appeals to the American Spirit of not giving a F###!  He is the underdog,  the rebel, and, at the core, the voice of a people who have been reared to think there is no other way but The (white) American Way.

He embodies the spirit of the West,  trampling over the natives and just about everyone who gets in the way of their brand of progress and civilisation.  He is a white supremacist in that he believes, like most of the West,  that they have a greater right to life and self-defence even if they shot the first volley, 2nd and 3rd volley of projectiles ranging from missiles to embargoes to the installation of rogue states and governments for their own gain.

So you could say, that Trump has a little something for everyone over yonder in the Land of the Free and Home of the Brave.  And hence, he's still up there doing what he's doing.....pushing forth The American Way, in just simply a more blatant fashion than others.

In essence and subconsciously, much of the opposition he faces is from those who dislike him baring what they do under the cloak of political correctness and propaganda.

Trump is, The True Face of America.  Their very personal is his Trump card.