Way Too Much Eurocentric Ado About David Bowie 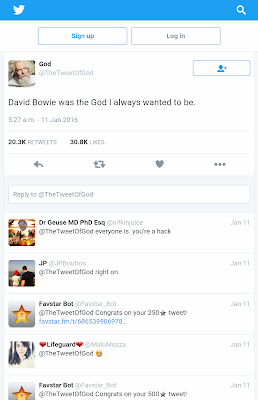 All of the following were published as comments on the Facebook pages on the British, The Guardian, and BBC.  They received rave insults and swearing by a large number of English readers.  One of it, probably due to complains by readers and perhaps The Guardian themselves, led to the a2ed's post being deleted and access temporarily blocked for 24 hours.

The white man, and the God he's made in his likeness, cannot be challenged I suppose. 😉

Whatever the creativity of Bowie, he certainly didn't do much to ease the affliction of gross Eurocentrism in the west.  If anything, and if the response to his demise is anything to go by, it both revealed and reinforced the affliction. 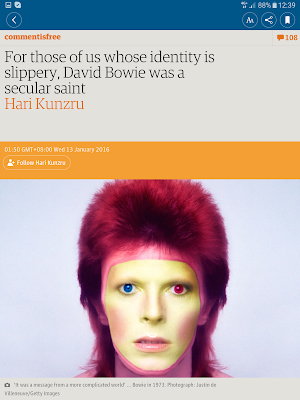 OK OK.   So he was the messiah.  A godsend. A demigod.  The answer to all of humankind's woes.  Forget the produce of the cultures of more than 5 billion people which the west know nothing about, he's the best, and were going to get everyone in the world to think as such with a combo of downplaying all other cultures and saturating the global media with what we valuse in our finite wisdom....and you better not vocalise otherwise.  That's what makes this pro-white propaganda, albeit unwitting.

I like Bowie.  He's on my Walkman.  But I'm also exposed to other cultures.  And hence, I'm not fooled into thinking all of the above.  But I do know that in the west, pop culture comprises a significant bulk in the bulge of their culture.  And so I think I know why all this fuss and news after news after news after news about it.

Methinks, all this indicates, not the existence of a culture, but what people get fixated on when they don't have much of one.


Let's just forget that he made millions and millions from it at the same time whilst people keep begging each other for pennies to end poverty to finding a cure for diseases.  So, in effect, these 'star' worshippers are actually sacrificing their lives and the lives of their loved ones to maintain these 'stars' over themselves.  What a bunch of dimwits.  I suppose this is what we end up with when we passover traditional saints for singers, etc.  I dare say there is far more fuss over this than there was when half a million kids were killed by US-UK embargoes in Iraq not too long ago.

Many in the UK criticise and ridicule the religious and religion.  In truth, their criteria of religion is based on what traditional religion is.  By doing thus, they leave out the evolving faces of religion which would include their religion of popstar/celeb/royalty/wealth/materialistic worship.  They do not realise that fans and consumers comprise the congregation of their uniquely western religion.  And the problem with all that is that they replace traditional saints of virtue and humility for mere wealthy singers and etc.

Methinks, all this indicates, not the existence of a culture, but what people get fixated on when they don't have much of one.

Sometimes, I think,  people in the west are just, well, the very definition of weird.

P.s. the above critique is actually a challenge to my own biases; a reprimand to myself to reconsider my views which are like quite a few in the west. 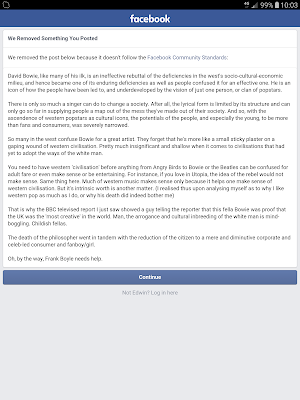 The following article was deleted by Facebook from the news site it was published in, and Facebook blocked facebook/according2ed for 24 hours.


David Bowie, like many of his ilk, is an ineffective rebuttal of the deficiencies in the west's socio-cultural-economic milieu, and hence became one of its enduring deficiencies as well as people confused it for an effective one.  He is an icon of how the people have been led to, and underdeveloped by the vision of just one person, or clan of popstars.  They are an opiate, or sedative, that serves a cathartic function of stress-relief to leading people to think that they can change society with a pied piper at the helm.

There is only so much a singer can do to change a society.  After all, the lyrical form is limited by its structure and can only go so far in supplying people a map out of the mess they've made out of their society.  And so, with the ascendence of western popstars as cultural icons, the potentials of the people, and especially the young, to be more than fans and consumers, was severely narrowed.

So many in the west confuse Bowie for a great artist.  They forget that he's more like a small sticky plaster on a gaping wound of western civilisation.  Pretty much insignificant and shallow when it comes to civilisations that had yet to adopt the ways of the white man.

You need to have western 'civilisation' before anything from Angry Birds to Bowie or the Beatles can be confused for adult fare or even make sense or be entertaining.


You need to have western 'civilisation' before anything from Angry Birds to Bowie or the Beatles can be confused for adult fare or even make sense or be entertaining.  For instance,  if you love in Utopia, the idea of the rebel would not make sense.  Same thing here.  Much of western music makes sense only because it helps one make sense of western civilisation.  But it's intrinsic worth is another matter. (I realised thus upon analysing myself as to why I like western pop as much as I do, or why his death did indeed bother me)

That is why the BBC televised report I just saw showed a guy telling the reporter that this fella Bowie was proof that the UK was the 'most creative' in the world.  Man, the arrogance and cultural inbreeding of the white man is mind-boggling.   Childish fellas.

The death of the philosopher went in tandem with the reduction of the citizen to a mere and diminutive corporate and celeb-led consumer and fanboy/girl. 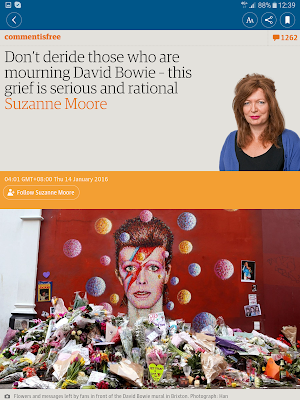 When Charlie Hebdo came out with their ridicule of the Prophet Muhammad, people in the west stood up for the freedom of expression.  (I) Analyse this mass breast-beating mourning about some popstar (David Bowie), and the volley of insults and hatred.

Amusing indeed.  And some people say the white man is Godless. 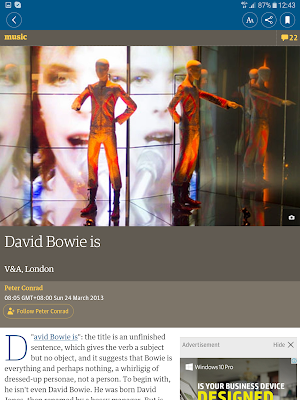 No. Bowie wasn't a 'shape-shifter'.

He just shifted shape within a western mould.  It is only multicultural people whom are the true shape-shifters.

In fact, the Japanese are greater 'shape-shifters' given how they shifted from tradition to Western modernism, and even grew, or underdeveloped enough, to appreciate western popstars like Bowie etc.  It is within the post-colonial context of the psychological and culturally-hegemonic hold of the West that one can understand the popularity of Bowie.  To confuse it as evidence of Bowie's intrinsic worth is self-serving, unintelligent, and pro-Western propaganda.

It is within the post-colonial context of the psychological and culturally-hegemonic hold of the West that one can understand the popularity of Bowie.  To confuse it as evidence of Bowie's intrinsic worth is self-serving, unintelligent, and pro-Western propaganda.


Basically, the Japanese, along with much of the rest of the world were thrust into westernised civilisation and forced to discard much of their own cultures.  Western music then stepped in to serve as an interpretational filter through which sense could be made of being interned within western modernism.  This, together with the self-esteem loss at being overwhelmed by the west, along with the association of all that was western as good, served as the foundation via which much of the tripe that flowed from the west was confused for cordon bleu.

David Bowie, like most western allegedly 'avant-garde' western popstars did what he did on the basis of the little that he knew, based on the much that was made of western culture, and the next to nothing that was and is known about the rest of the 80+% of the planet.

Compared to the produce of quite a few ancient regions of the world, David Bowie, amongst others, are pretty much shallow and juvenile...though there is an aspect of my persona that likes him much. 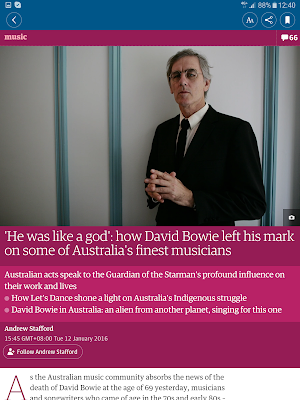 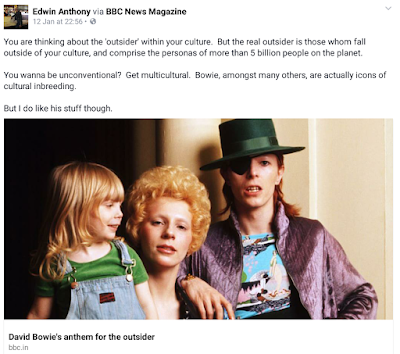