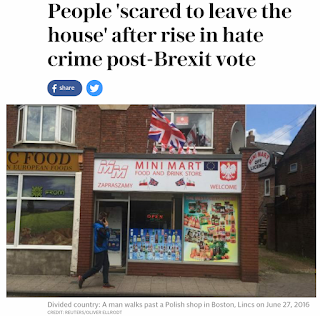 The spike in hate crime since the EU referendum has left some people frightened to leave their homes, the leader of Britain’s police chiefs has said.

Sara Thornton, chairwoman of the National Police Chiefs' Council, made the comments as she revealed the number of hate crime incidents reported to a national police portal since the vote has been five times the typical weekly level, new figures have revealed.

Between last Thursday and Wednesday this week, 331 incidents were reported to the police-funded True Vision, compared to the weekly average of 63 reports. All the incidents are under active investigation. - telegraph


The reason why this is happening is because the British, or more accurately, the English,  have never really had to face, or had impressed upon them what utter racist murdering and plundering people they were in their history that would make even Hitler a lesser evil in comparison.

They are still taught to worship a monarchy that is equivalent to the Third Reich in their relation to the colonised peoples;
they still applaud their racist historical characters;

are taught that they 'civilised' the world whilst ignoring the fact that such 'civilisation' was not intentional but an accident of colonialism, and that if there was any civilisation, it only began to take real shape after their racist and murderous asses were booted out of colonised states;

still parade their veterans of the second great European war as if they were heroes where in actual fact they were a part of a global racist plundering army;

still present themselves as the saviours of the world in their defeating the Nazis and the Japanese whilst keeping quiet about how they actually gave birth to these entities themselves through their preexisting racist white supremacist mindset and forcing the Japanese to be like them or risk being colonised and plundered;

Or the bloody cheek of calling these 'world wars' when it was just a European War with others being roped in to fight for their 'empah' and queen/king and other such bollocks;

how about the loot in the British Museum....or their precious Queen's crown;

or how about how they had joined the white-only EU, restricting ease of entry to peoples from, say, the 'Commonwealth' to whom they owe a greater debt considering their global economic, political and military ascendancy today arises largely from that stolen from this commonwealth in the past, if not in the present?

You think their history books are going to be structured in a way that the English might naturally start wondering any of the above?  That's censorship.  And these fellas keeping banging on about how the Japanese censor their history books.  Or call others terrorists when they have done far worse or instigated it through incessant provocation.  What audacity.  Oh sorry, I forgot, white man can do no wrong even when wrong right?

So is it any wonder that this sort of thing is happening?  Do you think any of the English, be they from the 'leave' or 'remain' camp realise any or most of this?  No.  They won't.  And you know why my dear boys and girls?

There is no such thing as a non-racist English.  There are only those whom are blatant about it, and those who don't think they are racists simply because their racism has been normalised.

I think the English got a lot of soul-searching to do....if they can find it that is.

P.s. I don't hate the English.   I just recognise them for the good that they have, and the twats that they are as well.