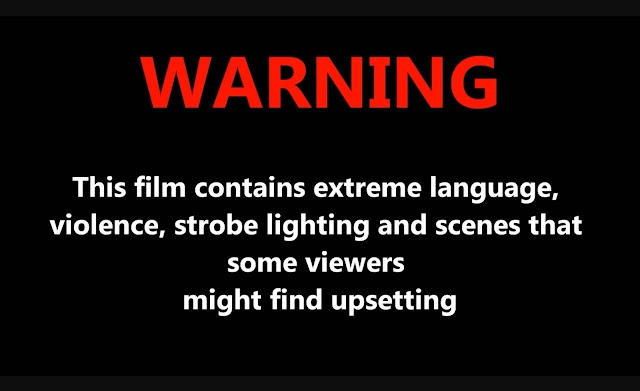 The subliminal trick in this 'warning' lies in, 'scenes that SOME viewers might find upsetting'.  Implied in this 'warning' is that if you find it upsetting, you're in a minority, and you're deficient in some way.  By using the word 'some', they are implying that these elements ought not to upset you as MOST aren't upset by it.

Implied in this 'warning' is that if you find it upsetting, you're in a minority, and you're deficient in some way.


There was a time when it would have upset most, if not all, people.  But with such 'warnings', people have been gradually coaxed into accepting that it is deficiency on their part that leads them to find it upsetting.

In a clamshell, it makes you more reactive as opposed to thoughtful; desensitised to violence and inhumanity; increases mutual alienation and mutual negative feelings between people; and promotes self-absorption.

So the purpose of such 'warnings' is not to inform you of the twisted content of films being ejaculated out of the psychotic western move industry, but to imply that if you are not 'entertained' by it, there is something wrong with you.

This has become standard fare for most of the nonsense the west, and particularly, america produces post-80s.  It is further exacerbated by the juveniles of the west becoming a major market.  With the 'young and unknowing', who have little to no exposure to the past, they are initiated into all of the above character traits via nonsensical juvenile films of the 'U' and 'PG' genres.  It is sort of a preschool before 'advancing' to more 'adult' fare that come with the pictured 'warning'.

In the west, an 'adult' is defined NOT by aspiring to, or possessing, or being inclined toward, content of greater intellectual, multicultural, and spiritual worth.  An 'adult' rated movie is one where gore, absurdities, sexuality, violence, evil triumphing over good, brazen and brash behaviour, inhumanity, is celebrated.  One is already dumbed down enough by juvenile fare before being reaching 'adulthood' so that they would naturally take to the utter psychotic and downright stupid rubbish without question.  And this is further complemented by violent computer and console games, sexually brazen 'music', shallow mind-numbing music, amongst a host of other phenomena.

What can be expected from such a 'people'?  They weren't that way mosttimes before the 90s.  They aren't going to question after their own culture as they have already assumed that their culture is the epitome of human civilisation.  It is up to the rest, or the few of of us, who've yet to fall victim to question this nonsense.  If not for ourselves, at least, for the sake of posterity.