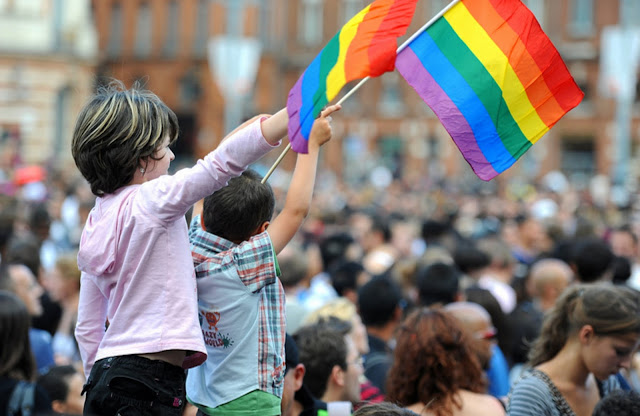 What, pray tell, is wrong with the west, and in this context, the English people?

They are actually promoting homosexuality to children under the age of 8 for goodness sakes!  And they are doing it in the name of 'equality' and 'respect' for differences.

(On a sidenote, i wonder why Ofsted isn't demanding that Jewish school kids are taught about the equality that the Palestinians deserve.)

The west has taken on a ultra-weird spin on the idea of 'respecting differences'.  How about those who differ in thinking that homosexuality is normal eh?

What next?  Promoting incest, 3some, 4some marriages?  They too can argue that it is just their 'lifestyle', 'their choice', they 'arent' harming anyone', it's their 'freedom to love'.

How are you going to argue against that when you have opened up a Pandora's box of justifying marriage between people of the same gender which is purely unnatural?  The west, and its global fans, does not realise that  through the justification of homosexuality, they have, in principle, given an incontrovertible approval all of the above.

And on the other hand, if a man kisses a 15 year old girl, he is a pedophile and is thrown into jail, even though she is biologically ready to conceive and give birth.  The west has turned nature on its head with this homopromo, and all other perversions have been justified in principle through it.  That's a logical fact.

AT THE CORE OF THIS

...is the spirit of white western supremacism.  What they say goes, and all other cultures, belief systems, religions, traditions, mean nothing.

Most don't realise that white supremacism hasn't ebbed with the colonial age.  Their civilisation won over the rest of the world by the imposition of their capitalist/nationalist/consumerist/hedonist system of 'thought'.  All reality was made subject to their narrow version and application of science, and the monopolisation of intellectual and cultural development by their elite, and through them, their people.

It is within this context that we see them producing words like 'homophobia', denoting some sort of attitudinal ailment on our part if we do not embrace whatever they say.

This is nothing short of perspectival colonisation, and they seek to infect the rest of the world through exposure to their propagandic movies, sit-coms, laws, casting others as 'backward' or 'conservative' or 'having a long way to go' before changes are made (like the BBC did recently when contrasting Australia's giving the go-ahead for homosexual marriages with China)

We need to look back at our own cultures, AND each others' as well, and begin appreciating reality through lenses of non western/white supremacist origins.  Not just for ourselves and our children, but for the renaissance of all humanity as well, including the west.