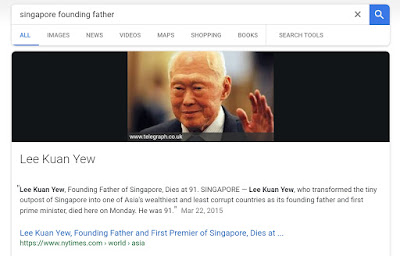 Lee didn’t make the most of singapore in respect and appreciation of its potent cultural differences.  He simply did the best that could be done when you get rid of it. He chose the easy route.  Nothing brilliant about that i'm afraid.


I posted a review of Viking Blades', the 'Chieftain' safety razor, not too long ago on Amazon US, and received this reply from them,

Thank you for your heartfelt review.
It's not that often that we receive such amazing acknowledgement. You sir have made our day and given us so much more motivation to continue staying in this tough business despite fierce competition from the big boys.

Thank you once again and enjoy your Odin.

PS: We love Singapore. One of the most inspiring countries in the world. The food, the people, the culture, the founding father are second to none!"

I was pleasantly surprised by Robert's sincere gratitude indeed, especially since i didn't expect a reply from Vikings Blade.  I was also pleased by his attempt to appreciate myself as a person by congratulating me on singapore, its food, culture and 'the founding father', all of which was 'second to none'.

Though i appreciated his ingratiation efforts, it was way off the mark, as i have great disdain for the people, the culture, and the so-called 'founding father' - Lee Kuan Yew.

Firstly, LKY isn't the 'founding father'.  Singapore as a post-colonial/capitalist state was 'founded' by Stamford Raffles.  The British are the ones who set up the infrastructure and set it on its regrettably capitalist path.  That is a historical fact.

As for Lee, he was a renovator, not the founder.  He simply spruced it up in various respects, and set it on a pro-chinese, racist, and grossly fascist, path.  So if this chinese racist and fascist is to be credited for being the 'founding father' of anything, it is in terms of being the 'founding father' of a racist, pro-chinese, and fascist singapore, and that begins from the year 1987.

It is from the success of his fascist and racist policies, and the ensuing transformation of the people into grossly self-absorbed, ignorant, arrogant and racist denizens of a top-down authoritarian legalist-confucian state that my aforementioned 'disdain' arises.

Singapore would certainly make a great sociological and psychological study of the world's only economically successful racist and fascist state.

NOW, in case you're thinking this is just an 'opinion', I don't cast out opinions, only analyses.

What if your prime minister, for instance, in the UK, was to state that educated people should NOT marry uneducated people as they would produce unintelligent children?....and then went about to set up a Social Development Unit to bring together educated people as a sort of a governmental dating agency?

What if your prime minister was to say that 'the UK must always have a white majority'?

What if your prime minister, in a multiracial country, which was originally a country of the local natives whom are now an ethnic minority, begin to promote the culture of the majority race over all others, including their language for social and work-use, and then forbade the local natives from learning it in schools?

What if your prime minister set up schools that gave the chinese a relatively better education than the non-chinese?

What if your prime minister installed his son as the next prime minister, and threatened to sue to bankruptcy any oppositional figure who dared to allege that it was nepotism?

What if your prime minister sued a foreign magazine for casting him and his government in bad light, and then threatened to stop their circulation in the country unless they apologised and retracted it?

WELL, this is what this so-called 'great stateman' did.....and MORE.


THIS SO-CALLED 'founding father' abided by the ancient chinese philosohy of 'harmony despite'.  In other words, leave all inequalities as they are, with everyone just getting used to it and doing their best as economic units, leaving the thinking to the professionals, and not wondering about what ought to be and taking things as they are.

This is the sort of state this ‘founding father 'founded'.

He took the shortcut past difference, imposed race-based support for himself, and told the people ‘do as i say or else’.  He took money from the people, built flats, and sold it back to them at a huge profit.  He dispersed the Indians and Malays throughout the country citing the need for integration, whilst ensuring the chinese remained a majority everywhere.  He turned the government into a state capitalist entity which in turn turned the people into employees.

Through racial and cultural favouritism, he brought about a milieu, over time, where the chinese didn’t think they needed to consider any opinion other than their own, and which basically made them far less intelligent than they otherwise would have been.

And most importantly, this ‘founding father’ squandered Singapore’s only great resource – it’s multiculturalism in favour of a non-thinking people who spurned difference and just abided by his decrees.  That is why he chose to favour the chinese over the other races or multiculturalism, as it would be the chinese to whom he would be able to sell China's decree-abiding legalist-confucian culture.  What the chinese never realised is that this approach would eventually render the population docile enough to necessitate the need for 'foreign talent'.  Quite the tragic comedy.

Taiwan, south Korea, Japan, are economic powerhouses.  They had only one race and culture, which is equal to one perspective on things.  Singapore had 4, and produced nothing thanks to Lee's placing the need to maintain a docile population that would ensure the perpetual rule of his party over the multicultural growth of the people and which ought to have produced more than the aformentioned states.  It was heading that way, till 1987.

SO YES, If Lee Kuan Yew is a ‘founding father’, he is a founding father of a singapore that was established in 1987, thoroughly bereft of intellectual, creative and humane vibrance.  He didn’t make the most of singapore in respect and appreciation of its potent cultural differences.  He simply did the best that could be done when you get rid of it.  He chose the easy route.  Nothing brilliant about that, especially since that sort of 'brilliance' had been practiced by men wielding clubs since the days of cavemen.