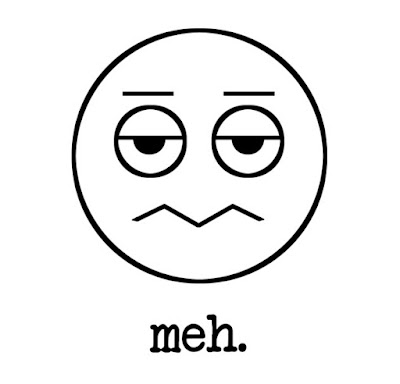 I keep seeing this silly word all over the place (oh dear, the american juvenile again...).  Well, I finally searched for its meaning, and discovered that it is supposed to mean, 'not impressive', or a nonchalant monosyllabic ejaculation of disinterest.  So an expressive ejaculation by an ill-educated american teen who's inclined toward reaction as opposed to cogitation becomes a word.  I see.

Such ‘words’ - OMG, LOL, Meh, et cetera - are like gaseous reactions, like flatulence, or a much awaited burp from a child with colic.  It relieves one of the need to justify their 'meh'.  It's a proclamation of judgement based on ‘feeling’, with such a reaction being mistaken for explanation - not unlike words like ‘eww’, 'cool', 'weird', 'dork', 'nerd', ‘creepy’, amongst other great literary achievements by american teenagers.  Mark Twain, Hemmingway, didn’t know what they were missing.

THIS is certainly a new twist on the evolution of Orwellian 'newspeak', where the reduction of words is supposed to reduce thought.  Except in this case, words are being replaced with emotive sounds.  Well done america.

And if this isn’t enough to dumb one down, we also have it being complemented by ‘like’ buttons, emojis, shaky camera movies, western 'music' reduced to beats and booty bouncing, pictorial quotes that are frequently forwarded by the cogitationally-challenged whom are very Zen in being able to say something by saying nothing.  Original or innovative thought is fast being relinquished to the narrow minds of news and entertainment industries.

If one was to think about it, when you allow the elitist, news and entertainment Industries to do your thinking for you, all that is required of you is an expressive ejaculation.  When you arrive at that stage, you have been rendered ripe for manipulation with little thoughtful resistance.  That’s where people are at.

Anyway, when it comes to 'meh', I believe the word one is ought to be seeking is 'mediocre' or 'wanting'.  Such words aren't  'feeling' or 'emotive' words, but analytical precursors that is expected to be followed by reasonable or analytical thought and justifications.  Replace that with emotive ejaculations, and the reason for analytical thought and systematic reasoning is done away with.