The White Man vs Us 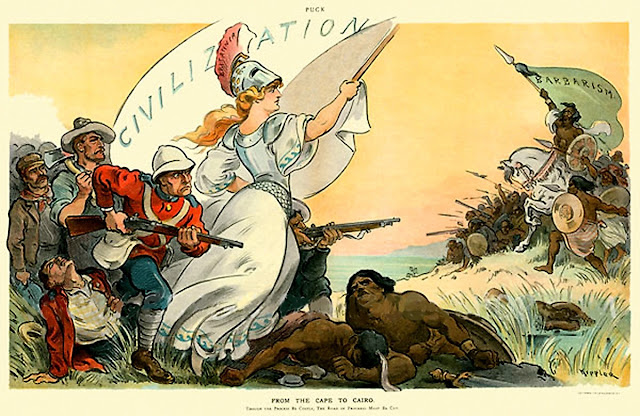 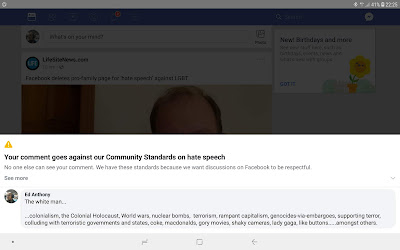 White media is the biggest whitewash in human history.

Given that the west promotes 'white worship', through their movies, the way they skew their news to present themselves as the good guys, heroes to be marvelled at, civilised, progressive, great humanitarians, there is a need to view this situation in a dichotomous, 'Us vs the White Man'.

The best way for any sector to promote an agenda is to de-racialise or de-sectorise itself.  In this context, to take away one's focus on them as a group, or, as 'white man'. It is then that people can be focused on doing this or that, or being this or that, instead of it being seen as 'doing what the white man wants', or 'being what the white man wants'.

The issue, of course, isn't in their being 'white'.  I have white friends myself, and love them dearly.   But i cannot excuse all that comes from their region so as to not 'offend' their sensitivities. Sensitivities are overrated. Only the truth matters. And when that comes to light, everyone benefits.


The American and European media is racist.

There is no doubt about that. But they effect their agenda in a 'politically correct' manner with the way They vs the World are portrayed. I wouldn't say that this is intentional actually.  It is more a consequence of self-absorption going back to the times of the Crusades, through Colonialism, to the present, validated at every point with their stopping the advance of the 'Moslems' or 'Muhammedans' at the Battle of Tours, or the Battle of Poitiers, in 735 a.d.; successfully turning the world toward their capitalist-nationalist route; defeating the negative consequences of their own actions and perspectives in 'world war' 2, whilst presenting themselves as the saviours of humanity; to getting even those in hot climates to don western suits and buy up the rubbish produce of Lady Gaga to gore.

Like the Chinese, they view themselves as the 'middle kingdom', ignore all differences, and just focus on developing their own culture, and hogging the global stage in its presentation, and thus, promotion.

This, is racism in itself. But they do not need to call you a nigger, a coon, a wog, a brownie, a coolie, an abo, a towelhead, a gook, etc, to do it. They can just exclude you in the presentation of the pantheon of heroes and role models from Descartes to MacArthur to Superman to the Pope to the permanent members of the UN Security Council.   If non-whites are given a place in their alter of deities, they are first assimilated.  And that in itself promotes the notion of the desirability of 'being white' regardless of the your skin colour, culture, or creed.

So actually, it is in this constant 'better than thou' promotion of themselves that the 'Us vs Them' dichotomy is born. Us calling it out as 'they, the white man', is us recognising this white-created dichotomy.

Part of this sleight-of-hand is to present white as better, whilst denying that they are doing it. They just present their traits, aspirations, economic, political, and social culture as the norm, call you 'conservative' to 'bigot' for resisting it. That way, they can make it a simple case of 'issues', and detract your attention from the fact that it is nothing short of cultural fascism.


So where does that leave us,

...whom have elected to adopt a Cartesian approach and 'doubt everything'? All we can do is to address the issues? Given that there is a global tendency toward white-worship, if we do not put 'the white man' himself into the dock, we won't be encouraging people to afford them as an entirety the skepticism which they so richly deserve, given that have taken it upon themselves to 'civilise' us from the Crusades to the Colonial era and to the present with their promotion of homosexuality to the notion that 'terrorism' is only when others do to the west what the west has done to others to a greater degree.

They give you a ruler, and tell you that if you can't prove the existence of God with it, then your God doesn't exist.

That, sir, is not only cultural arrogance, but gross stupidity itself.  This serves the core of the western white perspective of Them vs Us.


It is a paradox indeed. Descartes led them, and through them, us, to doubt everything and use the western white scientific standard to discern reality - not that some of our cultures didn't already do that a couple of thousand years before Descartes was born. And in that, they took away the freedom of all people, including the whites, to doubt that and them itself.

They give you a ruler, and tell you that if you can't prove the existence of God with it, then your God doesn't exist.  That, sir, is not only cultural arrogance, but gross stupidity itself.  This serves the core of the western white perspective of Them vs Us.

Firstly, came the period of global assimilation, plunder and extermination of dissenters and those whom departed too greatly from the white standard - to them, it is known as the 'Age of Exploration and Discovery'.

Then, after their capitalist-nationalist venture emerged victorious as the perspectival franca, they were left with no other cultural input to influence or contribute to their own cultural evolution as the first period of colonialism served as proof to them that all cultures were nothing compared to theirs.  Hence, left with nothing but their capitalist and nationalistic base, their culture necessarily evolved along hedonistic, consumeristic, sexually brazen lines.

This is when the 2nd stage of colonialism begins. Now, it is time to ensure that the entire world follow in its footsteps, from valuing white lives more than their own, be it in being shocked when the Twin Towers came tumbling down but not bothering when the US and the UK killed half a million children in Iraq form 1990 to 2003 via embargoes; to thinking that one must be a bigot if one doesn't give the nod of approval to gay marriages and teach their children likewise.  This is not necessary for the west or whites, to remain dominant. But it is a matter of cultural pride and arrogance that leads them to expect the world to say 'how high' when the white man says 'jump'.

A significant contraceptive against this cultural fascism is to recognise the White vs Us dichotomy that they brought into being.  Not to villify them, but to afford anything that comes forth from them the skepticism required to make a decision informed, not by their 'for and against' arguments by their people and academics, but by cancelling out the worse elements of their cultures with the best elements of ours.

I've learnt a lot from the white man. But i've learnt more from being multicultural.