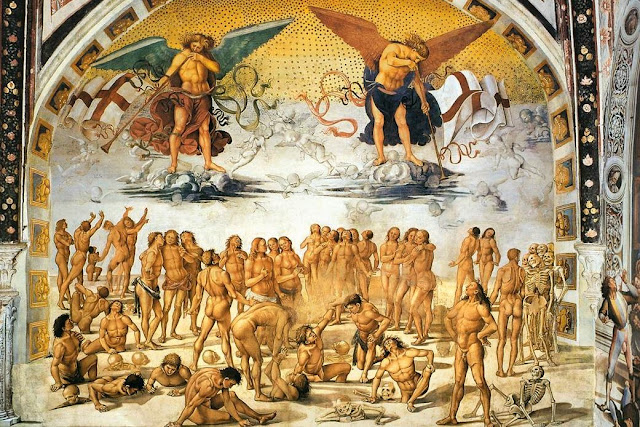 "Every time Christians recite the Apostles’ Creed, they affirm their belief in what will happen to them after death: “'I believe in the resurrection of the body and life everlasting.”

But according to a recent Pew survey, 29 percent of Christians in the US hold the New Age belief of reincarnation - the belief that when one’s body dies, one’s soul lives on in a new and different body, unrelated to the first." - CNA

In our consideration of perspectives in any arena, we need to appreciate that the wealth of ideas is also simultaneously dogged by the shadow of cross-cultural ignorance. And in this, it is never the whole picture.

In our consideration of perspectives in any arena, we need to appreciate that the wealth of ideas is also simultaneously dogged by the shadow of cross-cultural ignorance. And in this, it is never the whole picture. There is more. Everything is a part of a whole. So when it comes to western perspectives on anything, be it what deserves a 5-star Michellin rating to moves, music, philosophy, architecture, and perceptions on religion, we must keep in mind that these perspectives are a product of what they have experienced and what they have wilfully ignored and cast aside because it does not come from them.

That does not mean that we ought to discount it. However, we must realise that, just as it is in the case of all other aspects of their civilisation and all that they promote and believe, that it is one-sided, arrogant, and discount all other perspectives, culture, and races not emerging from their cultural clime - one of the reasons why there are few raised brows amongst them when it comes to the fact that Popes are generally white, and hence makes the Roman Catholic church an unwitting exercise in white cultural hegemonic colonialism.

So when you take this into account, we can then begin to entertain the probability that their idea of God is as narrow as their historically narrow experience.

Personally, i am a Catholic, but NOT a 'Roman' Catholic, as i do not abide by the Vatican and their white papal pronouncements in everything they think and say as the 'whole story'. They aren't representative of the entirety of the human experience, and the different manifestations and incarnations of The Father, The Son, and The Holy Spirit.

Just as God made us in his image, his 'image' may be found in all climes in various manifestations and parts like pieces of a puzzle that puzzles till they all come together.

Just as God made us in his image, his 'image' may be found in all climes in various manifestations and parts like pieces of a puzzle that puzzles till they all come together. In doing thus, God has made it incumbent upon us to come together to bring the best elements of our disparate faiths and cultures together to discern this 'image', and in doing this in itself, we would have come together in humility and mutual appreciation as God's children within a single family. And in this, is the first step toward the realisation of the Kingdom of Heaven here on earth.

So i will not discount the idea of Reincarnation. After all, are we not an 'incarnation' of God himself as stated in, 'God made us in his image'? Was the Christ himself not an incarnation in the form of man? Are we not 'born again' when we accept Christ? Why should we think to be true that resurrection cannot simultaneously be reincarnation? Why must we take as fact the western Catholic belief that what goes up cannot come down, as in, when we are resurrected, we go up to Heaven and that's that, no coming back.

According to the article excerpted above, this belief is termed as a 'new age' belief, which in itself betrays arrogance-cum-ignorance on the part of the writer and the Catholic News Agency itself. There is nothing 'new age' about it. When people in the west take on ideas of others, is it to be termed 'new age'? What are they implying? That things only exist when it recognised by people in the west, and till then, they are nothing? These are ancient beliefs, and propounded upon by great sages of the Hindu faith (of which Buddhism is a denomination), amongst others.

There are so many questions that can be asked, and which requires a non-westernised mind to do so. The west has done its part, and the best it can with its history. It's time we do our part.

They, the west, have claimed Christianity for themselves.

But together, we need to claim Christianity for God.