America. The 'Greatest Nation on Earth'? 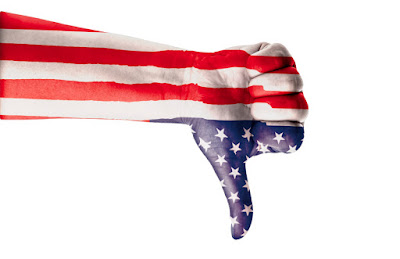 I've been watching The Punisher series on Netflix over the past week. Not that i like such stuff, but this one meets my minimum standard of having some sort of plot that isn't a constant insult to my intelligence.

Anyway, i kept hearing pro-america nonsense on it.  There's one chick by the name of Madani who works for 'Homeland Security', and at one point she tells her mother what a great country america is because an immigrant like her (mother) can get really rich there. And that's why, 'it has to be protected'.

'Huh?' moi mildly exclaimed, "But you can't get rich without it being at the expense of those who aren't!  The capitalist system, which is pyramidal in aspirational shape, will only allow a limited number of people to the upper echelons, whilst the rest will have to slog below them right. What shite."

(Yes, I'm inclined to talk to myself whilst watching american movies as my critique tends to make the experience more interesting that it otherwise would be.)

And then, at another time, after this chick has sex with a guy to relieve the stress of work - doesn't take much for people to jump into bed with one another in american movies does it - the guy says in a self-satisfied way, 'Well, we live in the greatest nation on earth'.

Greatest nation on earth? According to what standards?

You see, when you are inclined to think anything as great, it is based on taking particular standards as the norm.  It can also mean that you've developed and underdeveloped in various aspects of your personality.

And these standards are daily transmitted across the globe via skewed news, social media, and racism in the entertainment industry of the US.  And when people are brought up on such rubbish, they'll begin to ignore all that is different in their own and each others' cultures, and only focus on copying-and-pasting that which is lauded in such media in their own climes.  That is how people across the globe degenerate enough to think that America is the Greatest Nation on Earth.

It reminds me of the Chinese Han Dynasty. After intellectual vibrancy was killed off in China with the ascent of Qin Shih Huang Ti in 221 b.c., the post-Qin Chinese - as opposed to the Pre-Qin Chinese - were forcibly taught to view economic gain as the be-all-and-end-all of life.  Thereafter, when this was delivered to a relatively greater degree in the Han dynasty, they thought that they'd become the best they could be, and hence deserving of the term, 'Middle' or 'Central' Kingdom on earth - which is the english translation of the Chinese term - Zhong Guo - for China - they haven't changed much since then unfortunately.

The same thing goes for America, the modern and western variant of China.  If America is the greatest, it is in the propaganda it spews out to con much of the world into thinking it is; in conning its own lower class population into disrespecting itself enough to worship their elite; and in instituting a state that goes by the dictum, 'In God We Trust', whilst making the dollar bill on which it is printed his Pontifex Maximus thus effectively usurping the Heavenly throne.  Do you really NOT see the contradiction mate?

So what IS the Greatest Nation on Earth?

The answer is simple really.

It is the nation where most ask the two questions above - "Are these standards the best that can be?", and, "What have I lost that leads me to think that what I experience is the best that can be?" - develop a culture around the effort to seek out the answers, and realise it.  It is THAT which maketh the Greatest Nation on Earth.

Failing which, your judgement will be based NOT on the wealth of all the knowledge that is to be had, but the poverty of ignorance of all alternative perspectives and selves.

To all you Americans, and non-Americans, who've fallen for the 'We are the Greatest Nation on earth' nonsense, I ask, how much cross-cultural ignorance, arrogance, and loss of various senses and sights did it take for you to be so gullible?

A frog in a well thinks the sky is round.