Explaining the Antecedents of singaporean Xenophobia 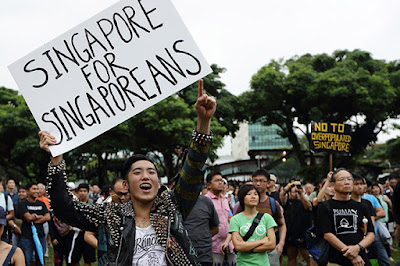 Quite a few singaporeans are going on about becoming ‘2nd’ and ‘3rd’ class singaporeans in the face of a massive influx of foreigners.

Right. Where does that place Malay and Indian singaporeans then? 4th and 5th class perhaps?

This basically serves as evidence of my observation in the past that Chinese singaporeans deem an event a non-event until it is they whom are at the receiving end of that which they are accustomed to dishing out. Such is expected of a people whom have, albeit unwitting, taken cultural and political fascism as the norm in the course of associating the idea of the ‘majority’ with ‘race’ as opposed to ‘nationality’ in the past, and now, for their own benefit, 'majority' with 'nationality' in the face of New Foreigners.

When, some years ago, the government stated that singapore ought to always have a ‘racial balance’ in favour of the Chinese, most, if not all, amongst them kept silent.

In the face of some griping on my part in personal conversations, the Chinese I spoke to basically brushed it off with the usual, ‘It’s like that one laa. If Indian or Malay are majority, they will also do the same.’ (translation of first phrase : ‘that’s the way it is’.)  Their justification of racism is, simultaneously, a justification of their undeserved status as 1st class citizens.

When the ‘Speak Mandarin and Appreciate Chinese culture’ campaigns were initiated in 1989 and periodically given a steroid boost to the present despite the lip service paid to multiculturalism, similar silence or rationalisations such as a self-absorbed and arrogant....and grossly racist, ‘Chinese majority what!' is what i've heard most times.

When Malays and Indians were underrepresented in the media;
when Indians and Malays were portrayed as parking attendants/obese rockers and corner-shop proprietors whilst ‘the majority’ were cast as professionally versatile in a popular sit-com;
when the government forbade the non-Chinese from learning Mandarin in schools whilst promoting Mandarin for social and work-use via ‘Speak Mandarin, it’s an advantage’ and ‘Mandarin is cool’ campaigns;
when Chinese culture was publicly and centrally celebrated whilst others kept to their traditionally ethnic enclaves;
when Indians and Malays were disqualified from quite a few jobs requiring ‘Mandarin speakers’;
when the ex-PM turned ‘minister mentor’ stated that Mandarin is going to be the ‘mother tongue’;
amongst a host of others instances, a similar response or lack of was forthcoming from the chinese….which leads me to believe that they expect to be respected purely on the basis of their being ‘the majority’ as opposed to their being respectable in an egalitarian sense. I suppose it is to be expected given they themselves respect the government because of their authoritarian power as opposed to their being empathetic. Thus we are undervalued, thus we undervalue.

Now, some are bemoaning the balance tilting in favour of foreigners whom, according to some sources, has reached 37%.

But what the Chinese are failing to query after in their ire over being confronted with an influx of foreigners is how the logic that had been applied in their favour is now being turned against them.  Now, it is the interests of the Chinese that is not considered.

But the interrelationship between the Chinese, local ‘others’, and foreigners is not entirely the same. The Indians and Malays were basically nobbled and led to underachieve in a climate where it was impressed upon their young over a couple of decades that they couldn’t aspire to much or be versatile because this or that career was ‘a Chinese thing’ or they couldn’t speak Mandarin – via the media, policies, discrimination, etc.

However, the interrelationship between the Chinese and foreigners is not unlike the interrelationship between the Malays in Malaysia – where the Malays have institutionalised via other means, a similar brand of fascism – and the non-Malays. Both have couched themselves in the complacency that comes with being members of the ‘preferred race’ and have failed to develop maximally for want of competition, or appreciation of cultural and perspectival difference.

In fact, in singapore, Indians are frequently told to tone down on their inquisitive and intellectual propensities lest the Chinese, whom maintain their position through ‘control’ as opposed to ‘reason’, won’t give them a job or promotions. Hence, I cannot but help observe that the ‘indians’ of today are quite the far cry from the ‘indians’ of yesteryear whom were relatively intellectually and creatively vibrant.

Someone once said, upon the passing of Joshua Benjamin Jeyaratnam, the old warlion of the opposition, that there would never be another like him. I agreed, but not because he was exceptional, but because the successful socialisation of the population into a Confucian/Legalist culture would ensure that the intellectual and perspectival vibrancy that it takes to produce one like him, or have one like him appreciated is no more. And I cannot but observe that the high level of creativity and vibrancy of the Malays has not developed beyond their cultural arena given the overarching Chinese cultural milieu that excludes differences.

What the Chinese don’t realise is that their Confucian/Legalist culture of subservience to authority;
being apathetic for the historically and, hence, culturally-induced fear of the top-down consequences of mutual empathy;
allowing popular intellectual individualism and creativity to be tethered to the decrees of their hallowed founding fathers and professional politicians;
has led to their being averse or indifferent to different others.
This has led to intellectual and perspectival ineptitude that emerges from not integrating with difference, being unable to see past one’s immediate and self or group interests, and lauding the ‘order’ that comes with awaiting and abiding by the dictates of their ‘Asian democratic’ government.

In this, their undoing at present is due to decades of apathy, subservience, and bigotry. It is no wonder that singapore has to import talent from relatively multicultural and non-Confucian/Legalist states since a monocultural state comparatively pales in quite a few creative, intellectual and perspectival abilities.

The desire for political longevity had led to the promotion of monocultural fascism. And the intellectual and perspectival stupor and bigotry produced is that which now requires the importation of foreign talent. The Chinese ethos of doing one’s best in a bad situation is now mirrored in the government’s doing exactly that by bringing in foreigners. How else can they get around the mass ineptitude that they created?

So now the Chinese go on about how 'singaporeans' - meaning the relatively privileged Chinese - are playing 'second fiddle to foreigners'. Well, as they have been accustomed to playing organ-grinder when it comes to the non-Chinese, is it any wonder that the groundwork they have worked so hard on via self-absorption has led to that degree of apathy and social imbecility it takes to require new foreigners, and which has led them to taking the place of the dancing end of the said organ-grinder?

Hence, In this context, the locals' current, and most hypocritical ‘democratic’ and ‘egalitarian’ aspirations, or more aptly, pretensions, in the face of authoritarianism and foreign competition rings as hollow as post-termite infested woodwork.